What’s in a theme?

Most of the blogs on the OMSA site are educational in nature. I am not sure this one will be. This is more like a Merriam-Webster definition:

Define blog: a Web site on which someone writes about personal opinions, activities, and experiences;

I think one of the most fascinating things about medal collecting and collectors and I can really only speak for British Medal collectors, is how many variations of collecting themes exist and how they all coexist in somewhat perfect harmony. 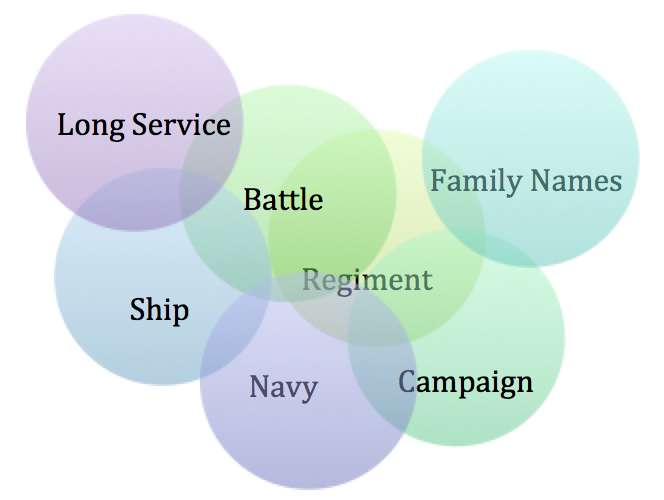 My somewhat simplistic Venn diagram illustrated above doesn’t do justice to the extensive overlap potential and how many themes can also be somewhat self contained. It wouldn’t be a very interesting hobby if everyone collected the same thing and felt the same way about a medal, a clasp, a rank, a regiment, a ship, or some other connection.  I think the concept of a connection leads to a choice of theme for some. Collecting to men from the same town you grew up in, or your father’s regiment, or men who served on a particular ship, or men who in civilian life had the same occupation you have, etc. often adds an interesting aspect to the research of the man behind the medal because of this personal connection.

How do collectors who are starting out pick a theme? I think in earlier times, a common approach was to collect types of medals, these type collectors were more interested in having an example of a medal rather than focusing on the person to whom it was awarded. While these approaches are still pursued today, my sense is that specialization has become the norm and through specialization, a collector will gather expertise which is much more difficult to do as a type collector. I thought I might start a blog about my own journey and how my interests have evolved since I think new collectors can sometimes be overwhelmed with the possibilities when contemplating a collecting theme.

I have been collecting for about 20 years now although I had a brief interest in the hobby as a teenager several decades earlier. When I started collecting in 1997, my theme began with a focus on affordability. Additionally, I felt that the more recent medals, let’s call them post 1910 were not as visually appealing as their earlier counterparts and I was attracted by the numismatic appeal of Victorian medals.

The most affordable Victorian campaign medal to collect and the one with the most scope for diversity was without a doubt the humble and relatively common, Queen South Africa Medal (pictured left).  It offered a classic Victorian design and what seemed like limitless possibilities of clasp combinations for what seemed like not a lot of money.

Most seasoned collectors will tell the novice to buy books and learn as much as they can before spending too much money and I was fortunate that so much was written about the Anglo Boer War (1899-1902).  With respect to the QSA, I learned that there were State clasps which were awarded when wasn’t entitled to a battle clasps in that State and these State clasps were generally more common than most of the battle clasps.

The more I read about the War, the more interested I was in certain regiments and I was drawn to the Gordon Highlanders who were entitled to 18 of the 26 clasps awarded and with two battalions serving, the Gordons provided more scope for variety than just about any other British Regiment.

The fact that both battalions had served in India a few years earlier also meant that there were a large number of somewhat affordable Trios of IGS/QSA/KSA.

Kevin Asplin is a well known researcher who helped me acquire service records, medal roll extracts and other background information related to  my early acquisitions. Kevin had also published several medal rolls and before I knew it, I was asking him to compile a complete QSA medal roll for the regiment.

With a roll in the form of a spreadsheet which was easily searchable and had sorting capabilities, I began to understand how the almost 4,000 QSAs and assorted clasps to the Gordons were issued and I could expand my search for regimentally scarce, or other interesting combinations of clasps, particularly the battle clasps which interested me most of all.

All of this led to a better understanding of what was sometimes referred to the last of the Gentlemen’s Wars and the regiment’s involvement in the conflict; particularly after buying Volume III of the regimental history, since about 90% of it related to the period 1899-1902.

I probably think of that first period as Chapter 1 when I pretty much bought nothing else besides QSAs and the occasional IGS or KSA that may have been accompanied by a QSA to my favorite Regiment. It didn’t take long before I was asking Kevin to help with an IGS roll and a KSA roll, this of course helped with dealing with broken groups. One thing about being a Regimental collector is that you quickly learn that other interesting medals were awarded and “your” regiment may not have been entitled to those medals or clasps. More on that later but sticking to the Boer war for the moment, I felt like I needed more medal representation related to other parts of the war, for example the siege at Kimberley.

The Gordons weren’t really involved beyond a small band of Mounted Infantry who were part of the Kimberley relief force so I bought some medals to other units. Then it was, what about Mafeking? and what about Wepener? and what about the Naval Brigade? etc. etc. and before I knew it my theme had burst out of its rather narrow scope to encompass the Boer War in general. At this point I may have moved on to Chapter 2.

I don’t know how many Chapters will cover the theme and its evolution and my current theme might be the final Chapter. I suppose numerically speaking it’s probably the 4th Chapter but to continue with the story, my next expansion of the theme came about a few years later when I felt that I was ready to look beyond the 1895-1902 period and go back to earlier (less affordable) campaigns.