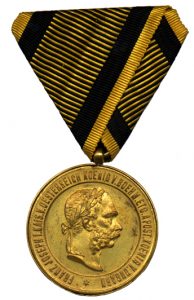 The war Medal (Kriegsmadaille) was issued from 1873 until 1916 as an award for all military personnel who took part in any of the military campaigns from 1848 until 1916.

Reason Issued: This medal was issued on the 25th anniversary of the reign of the Emperor Franz Joseph I to commemorate and reward members of the armed forces without regard to status or rank who had served in selected units during the wars and campaigns that had occurred since Franz Joseph had assumed the throne in 1848. These events were the First Italian War of Independence 1848-1849, The suppression of the Hungarian Uprising 1848-1849, The Austro-Sardinian War (Second War of Italian Independence) 1859, Campaigns in Schleswig and Jutland during the Second Schleswig War 1864, Campaigns in Bohemia and South Germany during the Austro-Prussian War 1866, Campaigns in the Tyrol during the Austro-Prussian War 1866, and the suppression of the insurrection in South Dalmatia in 1869. The medal was later issued for the campaigns in Bosnia and Herzegovina in 1878-1880 and 1882, the China expedition (Boxer Rebellion) in 1900-1901. On September 21, 1916 the medal was authorized to be reissued at the end of the war in white metal as a war medal for WWI service for those who had entered the field of battle before the death of the Emperor Franz Joseph I (September 21, 1916). The medal was never officially issued for World War I service.

· A number of private manufacturers

Case:  A simulated red leather case with the date 2/December/ 1873 in three lines in gold on the lid. The inner liner of the lid is of white satin. The inside of the lower portion of the case is black plush velvet and is fitted for the medal. The bottom of the medal is also simulated red leather. There were a number of variations of the cases for this medal. Known case makers were Josef Gruber and Moritz Tiller 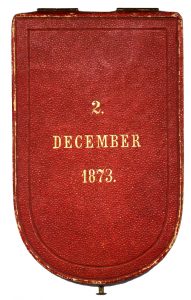 Figure 2: 1873 War Medal Case exterior as described above. Image from the author’s archive. 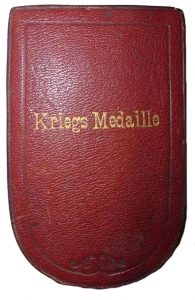 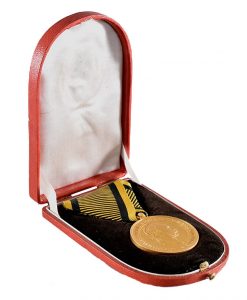 Ribbon: A 36-40 mm wide tri-fold ribbon, which is golden yellow with a 21 mm wide black laddered pattern in the center bordered by a 4.5 mm black side stripe. The edge of the ribbon has a 4.5 mm wide golden yellow border

Miniature:  There are numerous variations of miniatures of this medal 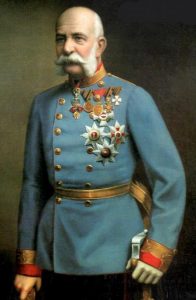 I hope you enjoyed this blog. Until next time I wish you well and hope you continue to enjoy this wonderful avocation.