When I started this blog one of my hopes was that from time to time a fellow collector would ask me to provide a detailed description of an Austrian or Austro-Hungarian award in which they had an interest but one that they had found difficult to research. I am delighted to say that just such a request was made a few weeks ago. A colleague who specializes in the awards of the Napoleonic era asked me if I had any information on the Villiers en Couche Medal. When I said that I did, he asked if I would consider doing a blog on this medal and its unusual history. I am delighted to do so, thus today’s posting is on the so called “Villiers en Couche Medal”.

The first thing I need to do is to clarify the name of the medal. To the world at large it is usually referred to as the Villiers en Couche Medal (sometimes alternately spelled Villiers en Couchie, Villers en Cauchie) but to the Austrians the medal was known as the Honor Medal for English Cavalrymen (Ehrenmedaille für Englische Kavalleristen) 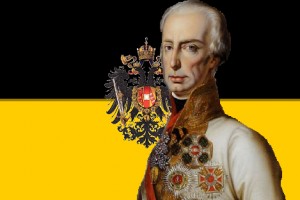 As he was advancing towards the area of conflict he became separated from his guarding force and found himself with a small contingent of officers on a hill near the village of Villiers en Couche. While observing the forces assembled below he became aware of a large French force of mixed cavalry and infantry approaching in such a way as to cut off his retreat and this situation caused considerable concern about his personal safety.

As his concern mounted he became aware of a force composed of Austrian Hussars and British dragoons who, as he looked on, charged the French and drove them from the field. The Emperor was very impressed by the bravery exhibited by the British Dragoons and believed that their timely intervention had saved him from possible capture or death at the hands of the French.  As a result he sent one of his aides to inquire as to the name of the unit of British cavalry to which he owed his safety.

What he found was that the British unit was composed of elements of the 15 Royal Light Dragoon Regiment (Figure 2) . This unit had been formed in 1759 by George Augustus Eliott a Lieutenant Colonel of the 2nd Troop of Horse Grenadier Guards. 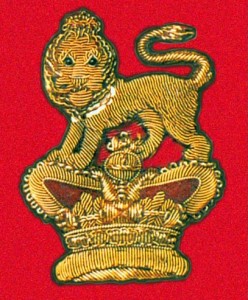 On the 24th April 1793 the 15 Royal Light Dragoon Regiment embarked for service overseas, under the command of Brevet Lieutenant Colonel George Churchill. They formed part of the light cavalry brigade commanded by Major General Ralph Dundas, under the overall command of the Duke of York.

On the May 23, 1793 the brigade saw action at Famars, and then formed part of the force besieging Valenciennes. After the fortress surrendered in July 6th the regiment once again saw action on the evening of the 7th on the heights of Manires. Subsequently the Fifteenth fought at Camp de César, Dunkirk, Lannoy and Cateau. On April 17, 1794 the Fifteenth fought at Prémont.

The unit was then sent towards the French border with Belgium to establish a defensive position in cooperation with the forces commanded by the Austrian Generalmajor Rudolf Ritter von Otto. It was as a result of this maneuver that the regiment was in position to take part in the Battle at Villiers en Couche.

Early in the morning of April 24, two squadrons of the Fifteenth Light Dragoons, under Major William Aylett, composed of 8 officers and about one hundred and seventy eight men, along with one hundred and twenty Austrians serving in the 2nd Leopold’s Hussars, led by Oberst, Freiherr Andreas Szentkerestzy de Zagon attacked the French forces at Villiers en Couche. The outcome of this combat was that twelve hundred French soldiers were either killed or wounded, three cannon were captured, the French forces retreated from the area and the Emperor’s safety was assured. The losses to the 15th Royal Regiment of Light Dragoons as a result of this battle was one sergeant, and sixteen enlisted men killed, and one officer, one sergeant and eleven enlisted personnel wounded, with Major Aylett being the wounded officer.

After the battle General von Otto and Karl Philipp Prince of Schwarzenberg (Figure 3) informed the Emperor of the names of the officers who had led the two squadrons of the Fifteenth in battle. The Emperor impressed by the heroism of the British Dragoons authorized a medal to be struck for the officers to recognize their bravery. 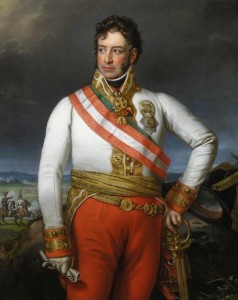 Figure 3: Karl Philipp Prince of Schwarzenberg, from the author’s archive

The Honor Medal for English Cavalrymen 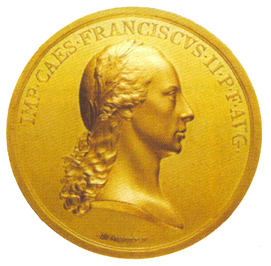 Figure 4: The Honor Medal for English Cavalrymen obverse, from the author’s archive 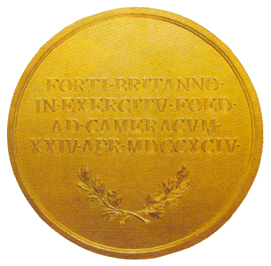 Figure 5: The Honor Medal for English Cavalrymen Reverse, from the authors archive

Date Issued:  May 1, 1798, (King George’s III gave permission to wear the medals on this date)

Reason Issued:  To reward eight British officers of the British 15th Royal Light Dragoon Regiment who distinguished themselves in heroically carrying out a cavalry charge against a numerically superior enemy at the battle of Viilliers en Couche on April 24, 1794.

Classes or Types:  One, A gold medal as described below awarded to British cavalry offers

Design:  A round medal with a raised rim and a round flat suspension eye at the top.

Obverse (Figure 6): The bust of Emperor Franz II, Facing to the right, with long flowing hair and a laurel wreath on his head. Above the bust is inscribed: IMP. CAES. FRANCISCVS. II. P. F. AVG. Translation: Emperor Franz II. The pious, providentially saved.  Below the bust is the name of the medalist: I.N.Wirt F.

Note: The F which follows the engraver’s name stands for the word Fabrikat which in English translates to fabricated. 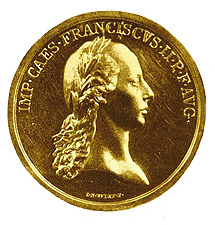 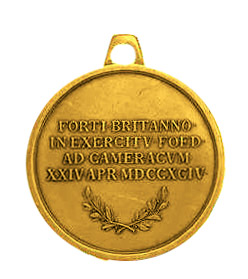 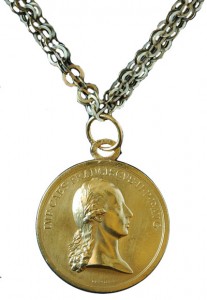 Figure 8: Honor Medal for English Cavalrymen on chain, from the author’s archive 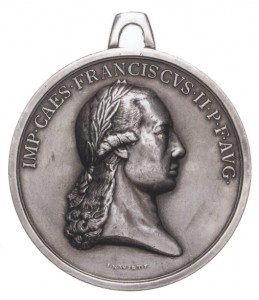 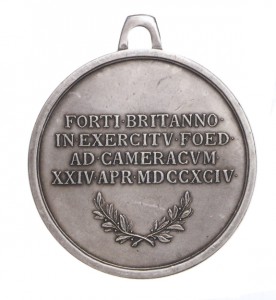 Type III: Unofficial examples of the medal in pewter have been reported in the literature. If they exist they were probably made for the collector’s trade. They are the same in design as the Type I medals except they are composed of base metal.

Number Issued:  Eight (Some sources say a 9th medal was struck to be kept at the Imperial Chancellery).

Ribbon: None, the medal was worn on a gold “chain mail” chain composed of double interlinked gold rings

I hope you have enjoyed reading about this medal and its  most unusual history.