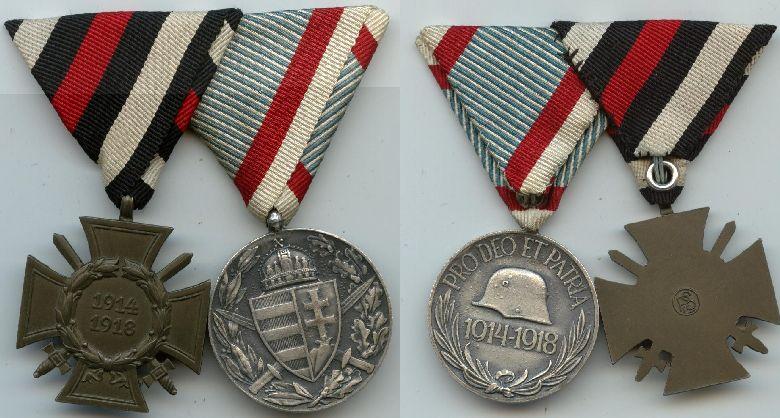 Click to Enlarge
Added by: Doc Riley Description: The Cross of Honor, also known as the “Hindenburg Cross” or the “Honor Cross of the World War 1914 – 1918”, was the only military commemorative award commissioned during the reign of the Thousand Year Reich. The Cross of Honor was established by President Generalfeldmarshall Paul von Hindenburg on July 13th, 1934 in order to reestablish honor and pride in the military and in the German people who contributed to the first World War effort and suffered through the post Versailles Treaty Weimar Republic administration. It was commissioned by the German Reichs Chancellery and designed by Eugene Goted. Three grades of the Cross of Honor were awarded for service during World War I. These were the combatants’ grade, non-combatants’ grade, and the next-of-kin grade. All three grades were common in size, 38mm across the Maltese cross, with raised edges, wreaths, and dates, all of 1 mm in height. All grades of the medal also had a flat reverse with either a manufacturers stamp or number. The combatants’ and non-combatants’ versions of the medal were generally made of bronzed iron or of bronze. The next-of-kin grade was blackened in order to recognize the loss of a family member. All grades of the Cross of Honor had to applied for and approved by the Reichsminister of the Interior. In May, 1942, the award was expanded to include Allies of Austria and Germany. The combatant grade was awarded to only those soldiers and sailors who saw combat in the German Imperial Military. The combatants’ grade was a Maltese cross with a pair of crossed swords between the arms of the Maltese. The swords measured 41 mm from the hilt to the tip. Each arm of the Maltese cross had raised edges highlighting the outline of the arm. The very center of the Maltese cross contained the raised numbers 1914 and 1918 indicating the duration of World War I. The year 1914 was presented directly above the year 1918. Outlining the center of the cross was a laurel wreath. The base of the laurel wreath was tied with a ribbon. The ribbon ends curled outward slightly and flowed into the bottom arm of the cross. The combatants’ grade ribbon was 25 to 30 mm in width. The ribbon itself had alternating bands of longitudinal orientation in colors from left to right of black, white, black, red, black, white, and black. Approximately 6,250,000 combatants’ versions of the Cross of Honor were awarded. Medal 2: Commemorative Medal of the World War. Awarded "with helmet and swords" to soldiers and other combattants or "without helmet and swords" to all other war participants or to the nearest relative of a soldier KIA. This medal was instituted on 26 May 1929 by the Regent, Admiral Horthy. The obverse shows the Military shield of Hungary surmounted by a crown and, if awarded with swords, they are underneath the shield. The reverse bears the text "PRO DEO ET PATRIA / 1914-1918" (for God and Fatherland 1914-1918) if awarded with a WWI helmet, it is over the dates. In case of the award "without helmet and swords", the ribbon is white with green-red-white side stripes. Keywords: Date Added: 11-30-2008