Order of the Medjidie, 2nd Class 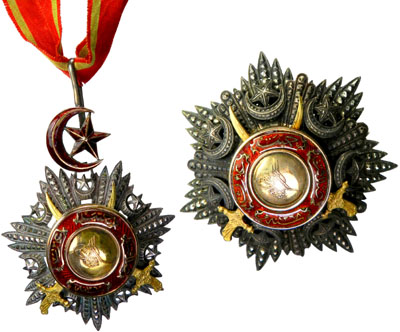 Click to Enlarge
Added by: SARC Description: TURKEY: Abdul Mejid, 1839-1861, Mecidiye Nisani order set, AH1268 (1852), Order of the Medjidie, 2nd Class, set includes the Breast Star of the Order and Order with original ribbon for wearing around the neck, each with golden swords. Star-shaped design with Sultan Abdul Mejid's royal tughra surrounded by an inscription on a gold-bordered circle of red enamel; all on a star of seven triple quills with small crescents and five-pointed stars between them, with the ribboned piece suspended from a red enameled crescent and star suspender. The set is encased in the original red velvet case embossed with golden Tughra on cover with numeral "2" in Arabic, EF, ex Gorny & Mosch Auction 188 lot 5787 where the set sold for $6150. Instituted in 1851, the Order was awarded in five classes, with the First Class being the highest. The Order was issued in considerable numbers by Sultan Abd-ul-Mejid I as a reward for distinguished service to members of the British Army and the Royal Navy and the French Army who came to the aid of the Ottoman Empire during the Crimean War against Russia. In Britain it was worn after any British gallantry and campaign medals awarded, but before the Turkish Crimean War medal. The Order was usually conferred on officers but a few enlisted soldiers also received it in a lower class. During World War I it was also awarded to a number of German and Austrian officers. The Second Class Order (Gold) was awarded only to 150 people, all given by the Sultan himself. Keywords: Date Added: 12-17-2013