When thinking of British campaign medals, especially Victorian campaign medals, the medal was typically issued in silver to the officers and other ranks. From 1885 until the First World War medals were issued in both silver and bronze. While the silver medals were issued to the combatants to the campaign, the bronze medals were given to reward the vital contributions of those men who allowed the fighting men operate effectively.

The Army in India, be it British or Indian, had long relied upon a vast array of non-combatants, often referred to as “followers”. These men performed an almost endless variety of tasks from cleaning uniforms (dhobis), cleaning the barracks (sweeper), providing water (Bhisti), cooking meals, barbers for the men, and grooms for horses (syces).  In May 1885 the British government in India announced the expansion of campaign medals to non-combatants “attached permanently to regiments or departments of the army”.  With this announcement medals were now issued to these hitherto unrecognized men in the Indian Army. 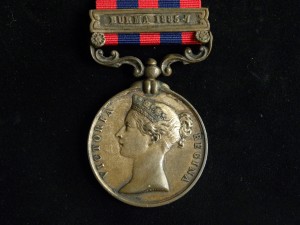 The first concurrent silver and bronze issues started with the Burma 1885-87 clasp of the India General Service Medal of 1849-1895. Initially these bronze issues were for service in India. The medal shown to the left is a bronze issue to “Jhorawallah Rettamullay 2nd Madras Lancers”.  A Jhorawallah was another name for a syce or groom; this is also an example of the linguistic differences within the Indian subcontinent.  As you explore the various ranks among the bronze medal, a greater appreciation for the workings of the Indian Army emerges. 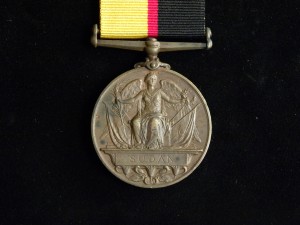 The manpower demands of the campaigns in China and Africa led to the Indian Army being used outside of India, thus, the expansion of bronze issues to campaigns for other regions.  The Indian Army had already been used in the Egyptian campaigns to protect the lines of communication before the battle of Tel-El-Kebir in 1882 as well as the initial battles in the Sudan; these battles and campaigns took place before the precedent of Burma and, therefore, no bronze medals were issued for these actions.  By 1898, the British moved back into the Sudan to defeat the Mahdist forces of the Khalifa and the Cavalry of the Indian Army helped play a role.  The medal to the right shows the reverse of the Sudan Medal in bronze.  The medal is named to Syce Ramdcua, 1st Bombay Lancers.  As mentioned above, a syce was a groom for the cavalry horses. 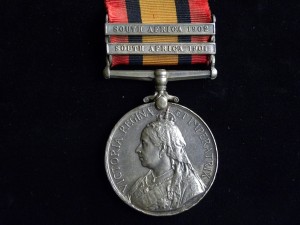 Bronze medals, while fascinating, bring a host of different problems to the collector.  As these were issued to non-combatants and non-Europeans as well as issued in the less valuable metal, bronze, they are often not as valued by dealers and collectors.  It is also nearly impossible to find out a detailed history of the recipients of these medals.  Records, if they were well kept or even kept at all, remain out of reach to the researcher.   Research on these medals can be exploring the various ranks and what their jobs were, or exploring the various campaigns they undertook.  The men who received these medals valued them but often in different ways.  The medal to the left is a bronze issue that has been silver plated to a Dooly Bearer (stretcher bearer for carrying men short distances).  Bronze issues for the South African War were never issued with clasps nor were they officially silver plated.  Did this man believe he deserved a silver issue?  Was this done to deceive a buyer?  Unfortunately we will never know but they hold an interesting story in any case.