US Distinguished Service Medal to a British Officer

On the “Medal Collectors’ Cooperative” blog on this site, Jeff Floyd recently gave us the story of Major General Sir Henry Thornton, an American who served with the British Army during World War I and received the Distinguished Service Medal from the United States Army. Jeff indicates that as far as he can determine Thornton “was the only American serving in foreign uniform to receive one.”  While Thornton may well be unique in that respect, the award of the U. S. Army Distinguished Service Medal to officers of the British Army, American or British, were not at all common. One British Army officer who received this medal was Brigadier General Clive Gordon Pritchard, late of the Royal Garrison Artillery (Figure 1).

Pritchard was born on 10 August 1871 at Mussoorie, India, the son of Lieutenant General Sir Gordon Douglas Pritchard, K.C.B., Colonel Commandant, Royal Engineer, and Agnes Marie Pritchard, daughter of W. H. Cox, J. P.  He was educated at Temple Grove, East Sheen, and at Malvern College from 1886 to 1889 where he was a Lygon Scholar and played on his House Cricket and Football teams. He was appointed Gentleman Cadet at the Royal Military Academy, Woolwich where he graduated fifth in his class and was commissioned 2nd Lieutenant, Royal Garrison Artillery on 23 November 1891. From 1891 to 1898 he was posted to 4th Company, Southern Division, R. G. A at Golden Hill, Isle of Wight and at Weymouth.  On 23 November 1894 he was promoted Lieutenant, R. G. A. and from December 1898 to July 1900 served with No. 5, Mountain Battery, R. G. A. at Kalabagh, India.  On 4 December 1899 he was promoted Captain, R. G. A. He served in Hong Kong from July 1900 to October 1901 as a Captain in No.  25 Company, R. G. A. and with the same company in Singapore from October 1901 to April 1902.

Pritchard was Officer Commanding, Hong Kong Volunteers, with the local rank of Major, from 2 April 1902 to 31 March 1907.

“During the five years he held this appointment his enthusiasm and kindly influence permeated the Corps and endeared him to all ranks. He did much to raise the standard of efficiency of these units, and helped materially to improve the Corps’ amenities – including the construction of a new headquarters – and its training facilities.”

He was posted Adjutant, Royal Artillery, Golden Hill, Isle of Wight from 17 November 1909 to 15 December 1911 and was promoted to substantive Major on 16 December 1911.  From May 1912 to March 1915 he served as Officer Commanding, 88th Company, R. G. A. in Hong Kong. On 30 July 1914 the Company received orders to move into positions laid down in the defense scheme to guard forts and to man the guns until reinforcements arrived. Command telephone lines were connected and the whole telephone communication system manned by operators. The declaration of war against Germany was notified to the Company at 0010 hours on 5 August and the Company was immediately ordered to the “war stage.” 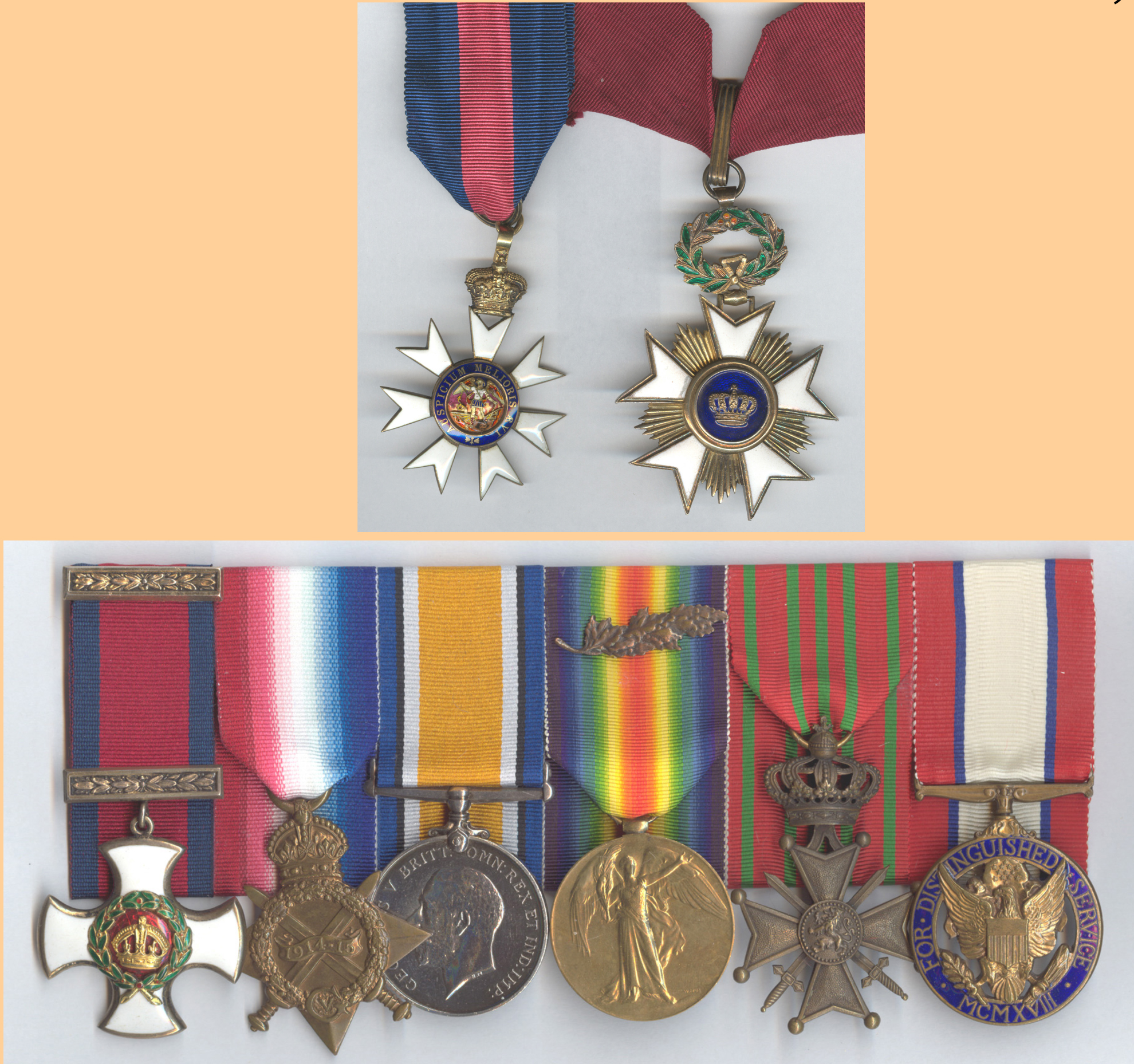 From 1 September 1916 to 2 July 1917 he served as Counter-Battery Staff Officer, 19th Corps. On 3 July 1917 he was appointed as a Temporary Brigadier General and from then until 15 April 1918, he was posted as Brigadier General, Commanding Heavy artillery,19th Corps. He “fought his heavy artillery throughout the German offensive which started in March. He and his batteries fought a most gallant action, down to practically point-blank range, in stopping the enemy’s final attempt to break through and capture Amiens, and by their action helped to save a critical situation.”

Pritchard was awarded the United States Distinguished Service Medal (no. 682) in General Order 17 of 1919 with the following citation:

“He lost no time in joining the then newly-formed local branch of the British Legion.  So actively did he identify himself with the aims and objects of the organization in its work for ex-service men, winning the immediate esteem of his fellow members, that when Captain F. Bond, M. C., relinquished the Presidency of the Branch he was elected his successor, a position he had held ever since, with the exception of a few years during the recent war.  Brigadier General Pritchard was also President of the Little Common British Legion Club, later being succeeded by Brigadier Broad.

Ever alert for the welfare and expansion of both branch and club, the Brigadier General worked tirelessly for the cause he had so much at heart.  It was largely due to his efforts, and the inspiration and example he set that funds were raised which made possible the various extensions to the club premises whcih today are the envy of many Sussex branches in districts with a far greater membership and population.”

The annual Poppy Day collection, however, was his first love and each year, in spite of his advancing age, he planned months ahead to increase the proceeds for the Earl Haig’s Fund. As organizer of the Little Common and Cooden collections, he spared no pains to make each year’s financial result a new record.  Some indication of how he succeeded, with the help of many willing collectors and generous-minded residents, is given by the fact that recent district collections were more than treble those of 1925 and thereabouts.

Soon after coming to Little Common, Brigadier General Pritchard closely associated himself with St. Mark’s Church.  In 1925 he was appointed Rector’s Warden, an office he held with devotion and distinction until obliged to relinquish it early in 1947 when he moved to Bexhill. He represented St. Mark’s on the Diocesan Council, and his services to the Church were so highly valued by his fellow parishioners that when he resigned his wardenship he received a presentation from them.  A book accompanying the gift was signed by all the donors, and bore the inscription:

“we who are residents in the Parish of St. Mark and worshippers in the parish Church, wish to place on record our great regard and affection for Brig.-General C. B. Pritchard, CMG, DSO; we thank God for the work he has done for the Church and for the example he has set us during the 22 years (1925-1947) he has held the office of Church-Warden. We shall always remember him for his kindness, courtesy, wise counsel and care for the highest interests of the Church.  Easter, 1947.”

On Thursday, 26 August 1948 “he was taken ill and removed to the hospital on Saturday for an immediate operation.  At first he made satisfactory progress, but on Monday his condition changed for the worse and steadily deteriorated.”  He died very suddenly at Buchanan Hospital, St. Leonards, Bexhill on Tuesday, 31 August 1948.  His funeral took place privately at Charing Crematorium on Saturday at noon and the service was conducted by the Reverend G. N. Standish, the Rector of St. Mark’s. A memorial service was held at St. Mark’s Church, Little Common, Bexhill on Tuesday, 7 September 1948 at 11:00 am; the reactor paid tribute to the life and work of Brigadier General Pritchard.  The local newspaper indicated that “Bexhill, and Little Common in particular, are indeed the poorer for his passing, and there is widespread sympathy with his widow and daughter.”

Last Will and Testament of C. G. Pritchard

List of Officers who have received commissions in the Royal Regiment of Artillery from June, 1862 to June, 1914, Volume II. Sheffield: The Royal Artillery Institution, 1914