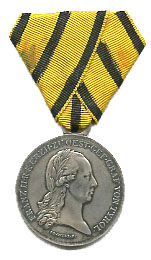 In this blog I am going to discuss the Tyrolean Commemoration and Merit Decoration (Tiroler Errinerungs und Verdienstdekoration). This decoration was issued by Emperor Franz II in 1797 to reward those Tyrolean’s who took up arms in support of the Austrian army and who displayed exceptional bravery or merit in successfully defending the Tyrol against the French.

Reason Issued: Issued by Emperor Franz II in 1797 to reward those Tyrolean’s who took up arms in support of the Austrian army and who displayed exceptional bravery or merit in successfully defending the Tyrol against the French.

Design:  A round medal with a raised rim and a large flat attached circular suspension eye at the top 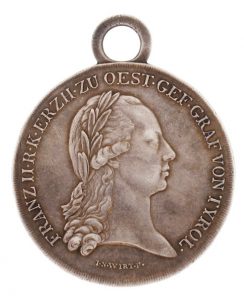 Obverse (Figure 1):  Inside a raised rim is the bust of Emperor Franz II, facing to the viewers right, with long flowing hair and a laurel wreath on his head. Around the edge of the medal is an inscription which reads: FRANZ.II. R. K. ERZH. ZU. OEST. GEF. GRAF. VON. TYROL. Translation: Franz II Roman Emperor, Archduke of Austria, Prince, Count of Tyrol. Below the bust is inscribed the name of the medalist I.N. Wirt F. (The F is not part of the signature of the medalist but stands for Fabrikat: manufactured). 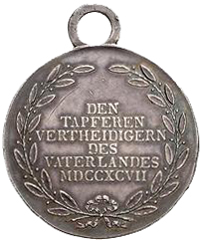 Reverse (Figure 2):  A laurel wreath tied at the bottom with a slender bow. Inside the wreath in six lines is inscribed: DEN/ TAPFEREN/ VERTHEIDIGERN/ DES/ VATERLANDES/ MDCCXCVII. Translation: The/courageous/defenders/of the fatherland / 1797.

I hope you have enjoyed reading about this medal. I look forward to sharing more information about the awards of the Austrian and Austro-Hungarian Empire in the near future.