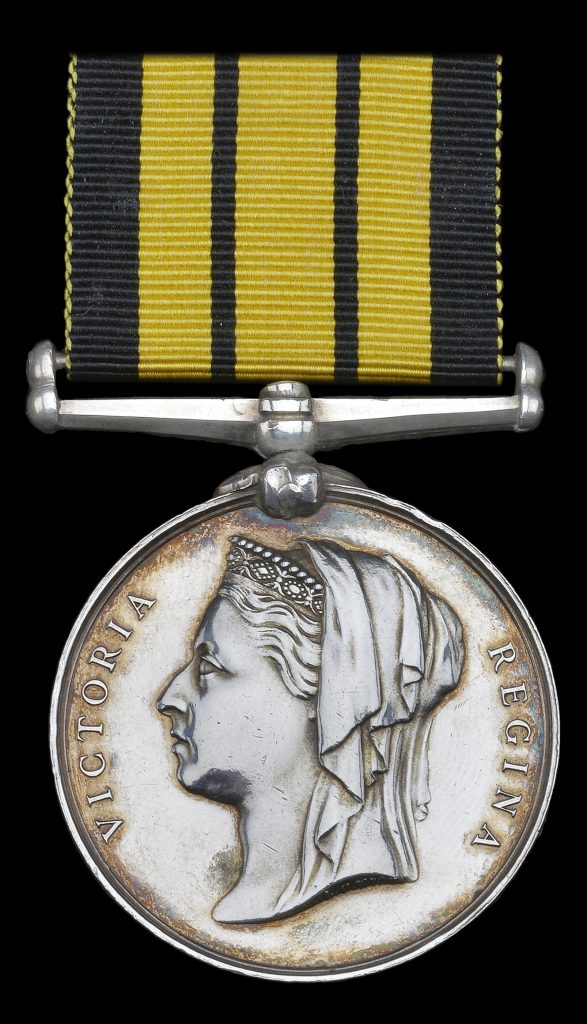 Many collectors avoid medals to men named to Smith, Williams, Jones or other common surnames. The rationale being that it’s much easier to research medals to men with unusual names. I found myself being delighted recently when I discovered an unusual middle name  existed for William A. Keown. The surname wasn’t overly common but the middle name of Annesley must surely suggest a unique name to a sailor in Victoria’s navy.

The answer to this little mystery was that there was another William A. Keown serving in the RN at approximately the same time. This wasn’t that difficult to accept but imagine my surprise that the second sailor also had the middle name of Annesley.

At this early stage of the research journey, I think these two men may be related since both have connections with Downpatrick in Ireland. 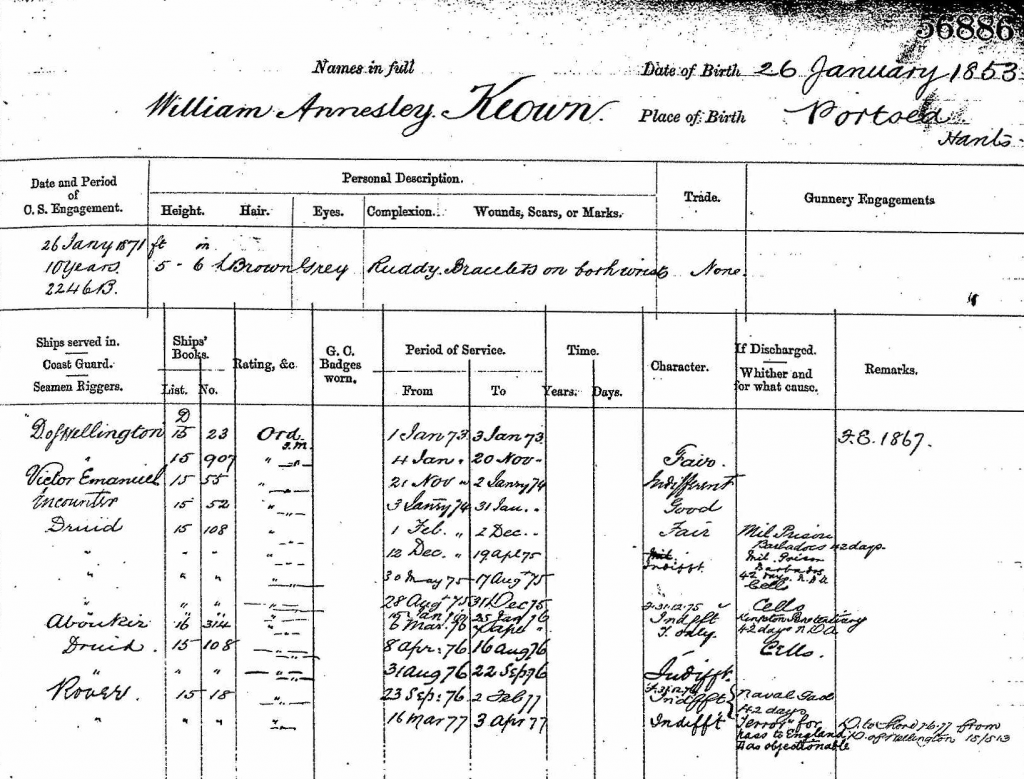 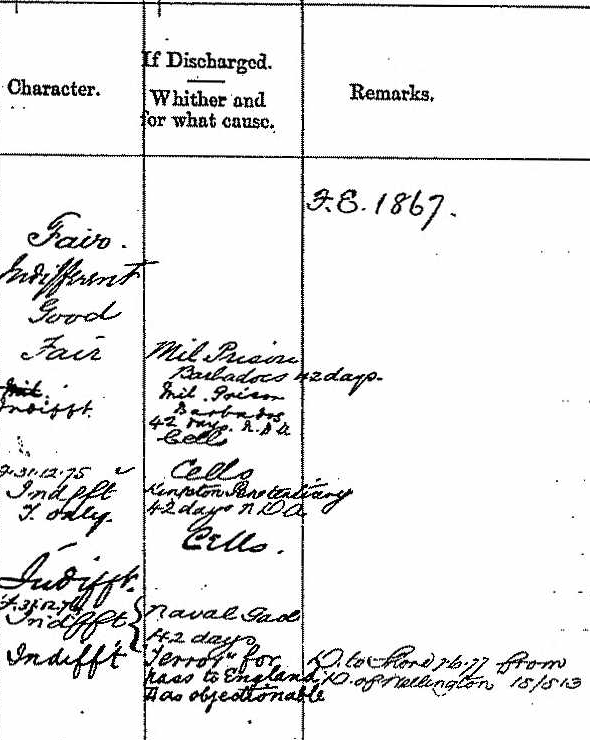 William Annesley Keown was born in Portsea Hampshire in January 1853. He was one of 4 sons of Henry and Louisa Ann Miller and at least one of his other brothers served in the RN. His father Henry born in Ireland, served in the Navy and earned a second China medal as a Gunner aboard HMS SCOUT.

William’s Ashantee medal named to HMS DRUID was earned when he was 20 and it was his only medal. His Service Record, an extract of which is above, shows that he had a relative short naval career. His first entry was in 1867 and he appears in the 1871 census aboard HMS ROYAL ALFRED.  However, most of his service was aboard HMS DRUID.  Throughout his career his character is described primarily as indifferent. As it happens, during his short time afloat, DRUID would spend time not only off the coast of Africa but in numerous parts of the West Indies and North America. During this time, he spent no less than 4 separate stretches in prison of 42 days at a time.

In the case of Keown, it was a chance to see the world and experience some of the world’s naval prisons.

The other William A. Keown

William Annesley Keown was born in Downpatrick Ireland in March 1858. This was the birth place of Henry Keown (the other William’s father) and the County town of County Down in which Earl Annesley resided. It occurs to me that both of these Williams’ were named after the Earl and perhaps the families were tenant farmers. Some more research may reveal if these men were related. I suspect perhaps they were cousins.  Where does the title of the blog come from? Well this man’s service record couldn’t be any different from that of Keown number 1. Not only is his conduct very good while serving on SUPERB (and earning the Egypt medal mentioned at the start of this story) his record is essentially VG or better throughout his entire career in the RN and later in the Coastguard which results in him being awarded a Long Service and Good Conduct Medal in 1894. 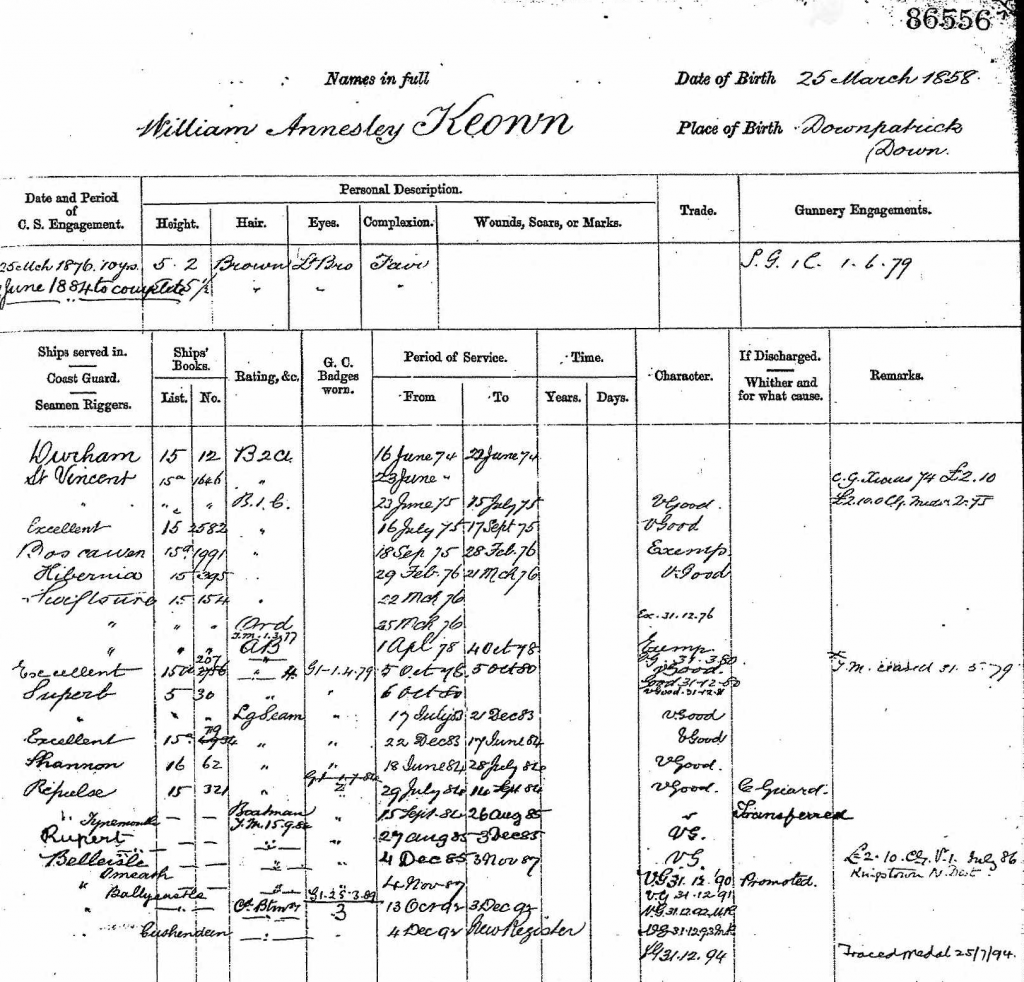 If I happened to stumble on an Egypt/LSGC pair to William A. Keown, I will be tempted to create a rather unusual reunite.  The unrelated medals will be reunited with the unrelated paperwork that came with my Ashantee medal.