The “War Ribbon”, a Concise History

Introduction to the “war ribbon”

In this blog I am going to discuss the history of one of the two most common ribbons used to suspend Austro-Hungarian orders and decorations. Early in my collecting experience I realized that two ribbons were used for multiple awards. One is the Ponceau red (Poppy red) ribbon that was used to suspend numerous Austrian civil orders, medals and decorations and the other is the red and white laddered ribbon often referred to as the “war ribbon” (Kriegsband) (see Figure 1). Unlike the red civil ribbon the red and white laddered war ribbon is only found on Orders and Decorations and not on medals. In addition it is only found on awards issued for bravery or for military merit in time of war.

The first award to be suspended from the war ribbon

The first instance of the use of the red laddered war ribbon was to suspend the Honor Medal (Ehran Medaille) which was issued during the reign of Emperor Joseph II in on July 19, 1789 (Figure 2). This medal is the oldest Austrian valor insignia issued specifically for non-commissioned officers and enlisted men. This decoration which after 1809 would be designated Bravery Medal (Tapferkeit Medaille) is the antecedent to all of the bravery medals that would later be issued by the Austrian and Austro-Hungarian Empire. It should also be noted that all Austrian and Austro-Hungarian bravery medals from this time were suspended from the red and white laddered war ribbon.  In addition this medal established the precedent, with two exceptions, of issuing decorations for bravery and for military merit in time of war on this ribbon.  The exceptions were the Ecclesiastic crosses which were issued from 1801-1918 and although they could be issued for bravery were not worn on the “war ribbon” and the Honor Medal for English Cavalry often called the Villers En Couche medal which was issued in 1798 for bravery and which was worn o n a gold chain. 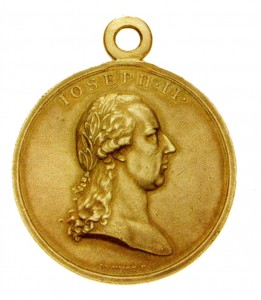 Figure 2: The 1789 Honor Medal was the first Austrian award worn on the war ribbon. Image from author’s archive

The next time the ribbon was used was in 1791 during the reign of Emperor Leopold II. In this case it was issued, for the only time to suspend the Golden Flag Medal for the Latour Dragoon Regiment (Later named the Windeschgratz Dragoon Regiment Number 14) from its regimental standard (Figure 3). This event was considered such a landmark that in 1868 when all cavalry standards were abolished this regiment was allowed by special order of the emperor to retain there’s. There were other flag medals but none were suspended from the “War Ribbon”(see note below). This medal was issued as a reward for the exceptional heroism and meritorious service of the Latour Dragoon Regiment Number 14 in all of the wars to date (1791).

Note: It has been reported that a war ribbon was used to suspend the gold flag medal awarded to the 50th Royal Infantry Regiment in 1851. However I have not been able to confirm this at this time. 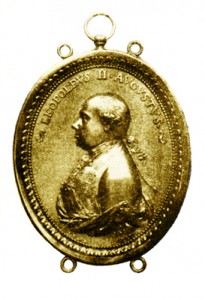 The ribbon was next used in 1792 when Emperor Franz II reissued the Honor Medal with his image on the obverse (Figure 4). This continued the use of the war ribbon for this type of “bravery medal”. This is the first time but not the last when a recipient of this medal could have also received the previous Honor Medal which had been issued three year prior and thus would have been wearing two different medals with the same ribbon. However at this time ribbons were not worn as they would be in WWI without the medal. Thus even though a person might be wearing two medals on the same type ribbon there was no confusion regarding each medal.

In 1804 when Holy Roman Emperor Franz II styled himself Austrian Emperor Franz I the Honor Medal was reissued and the “war ribbon was once again used to suspend this medal (Figure 5). A second version of this medal was issued in 1809 once again on the same ribbon. However now the medal was called the Bravery Medal (Tapferkeit  Medaille). Please note the bar seen on this medal is unofficial and not authorized by the Austrian Government. 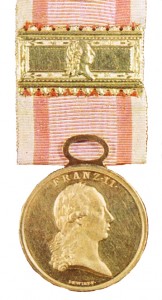 In 1839 during the rule of Emperor Ferdinand I, the Bravery Medal was once again issued on the “war ribbon” (Figure 6). 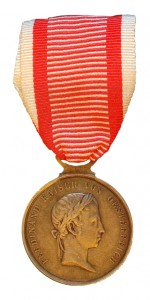 Figure 6: 1839 Bravery Medal on the war ribbon. Image from the author’s archive

In October 1849 an entirely new decoration for military merit was established for officers. Prior to this time officers were only eligible to receive the Military Maria Theresia Order, the Austrian Imperial Leopold Order and the Austrian Imperial Order of the Iron Crown for bravery or merit during armed conflict. The Military Merit Cross (Figure 7) was the first decoration specifically for officers to reward them for meritorious service. Thus in 1849 after 60 years of issuing various versions of the Austrian honor and bravery medals on the war ribbon an entirely new decoration was issued on the laddered ribbon. This decision cemented the red and white laddered ribbon as the “War Ribbon” and thus the most appropriate ribbon on which to issue decorations and later orders when granted for bravery or for military merit related to combat. One change that occurred at this time was that the ribbon could be worn on either a straight ribbon or on the trifold ribbon. The war ribbon would continue to be the only ribbon on which this decoration was issued as it increased in its complexity and variety. 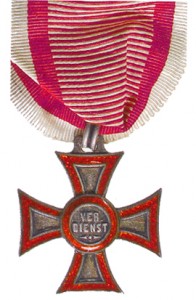 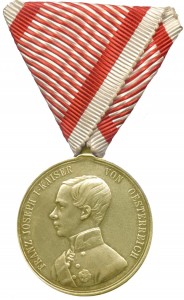 In March 1890 the Military Merit Medal often called the Signum Laudis was introduced as a merit decoration for officers. The decoration could be issued on two ribbons. The Ponceau red (Poppy red) ribbon was used for decorations issued for non-combat related meritorious service and the “war ribbon” for those issued for combat related meritorious service (Figure 9).  In 1911 a silver medal (Figure 10) was added to this award group and in 1916 the great Military Merit Medal (Figure 11) would be added to the other two grades (Bronze, Silver) of this award. These decorations would continue to be issued in a similar manner until 1917. 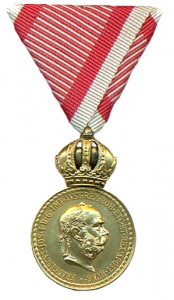 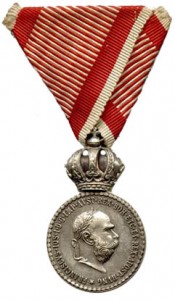 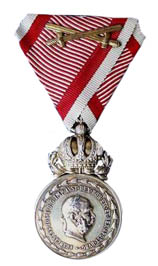 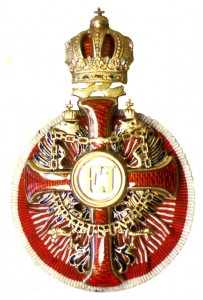 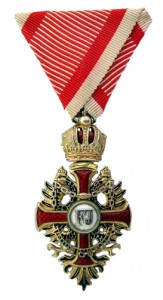 On September 20, 1914, the Gold and Silver Merit Crosses with and without crown, which had been created in 1850, were authorized to be issued for war merit on the “war ribbon (Figures 14 and 15). These decorations were commonly issued as a reward for meritorious service by chaplains, military officials and non-commissioned officers. Awards of this decoration would continue to be issued until 1922. 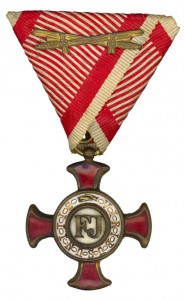 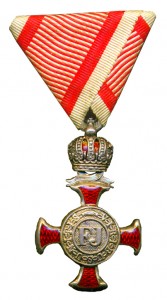 In April 1916 the Austro-Hungarian Empire created the Iron Merit Crosses with and without crown (Figures 16 and 17). This decoration was created to be analogues German Iron cross and like the Gold and Silver Merit Crosses it could be issued on two ribbons. These crosses however were only awarded to non-commissioned officers, enlisted personnel and military officials of a similar rank for technical merit. The Ponceau red (Poppy red) ribbon was for decorations issued for non-combat related meritorious service and the “war ribbon was for those issued for combat related meritorious service. This medal would continue to be issued until 1922. 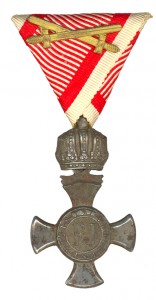 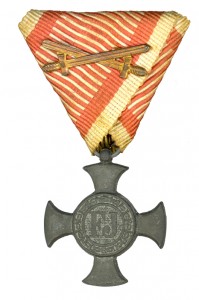 On October 27, 1917, as they say “the plot thickened” when rectangular ribbons were introduced to be worn on the uniform tunic (Figure 18). These ribbons were to be worn without the decorations they represented. In doing this the Austro-Hungarian Empire created a problem that has be bedeviling scholars and collectors ever since. Specifically how does one identify which decoration is represented when one or more of the war ribbons are worn on a ribbon bar? So far as I am aware there is no answer to this question. One can make an educated guess but I don’t believe  certainty is a possible.

The last awards to be suspended from the war ribbon

In April of 1917 the last version of the bravery medal on the war ribbon was introduced with the image of Emperor Karl on the obverse (Figure 19 and 20). This medal would be issued until the fall of the empire in 1918. 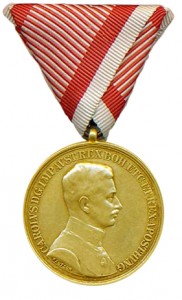 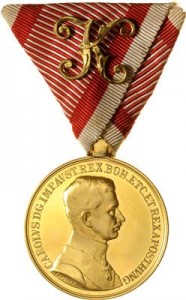 Also in April 1917 the Austro-Hungarian government issued the Military Merit Medal and the Great Military Merit Medal with the image of Emperor Karl on the obverse (Figure 21, 22 and 23). These medals like the bravery medal were issued on the “War Ribbon” until 1918. This was the last medal to be issued by the Austro-Hungarian Government on the war ribbon. 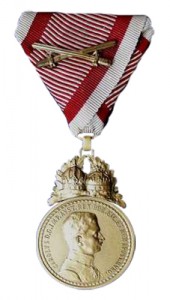 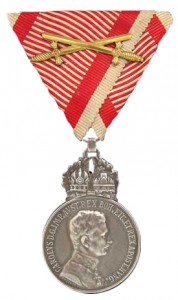 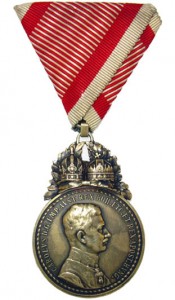 I hope you have found this voyage through the history of the “war ribbon” interesting. I look forward to our next opportunity to share.
Rick