Since at least the 1990s the Medal Office of the Ministry of Defence has continually stated that they were no longer issuing/reissuing medals that were issued prior to World War II to original recipients or their next of kin, but in 2014 this policy was revised and it was indicated that the Medal Office “no longer makes initial issues of World War I medals, but can reissue if the original medals are proven to have been returned.”  Two criteria must be satisfied for the reissue of the medals:

Beginning in early 2014 discussions of this policy were a regular feature of posts on the Great War Forum (www.1914-1918.invisionzone.com) with a number of correspondents reporting that they had successfully had World War I medals of their next of kin reissued.  Thanks to the kind permission of Anne Caughey and Malcolm Woods I am able to report on two of these reissues and offer images of the medals and the naming on the medals.

Wallace Greer went to France on October 4, 1915 as a Corporal in the 8th Battalion, Royal Irish Rifles, but his medal index card indicates that on October 28, 1915 he was reduced to Private for misconduct in a theater of war (Figure 1).  On July 2, 1916 he was killed in action and is remembered on the Thiepval Memorial. 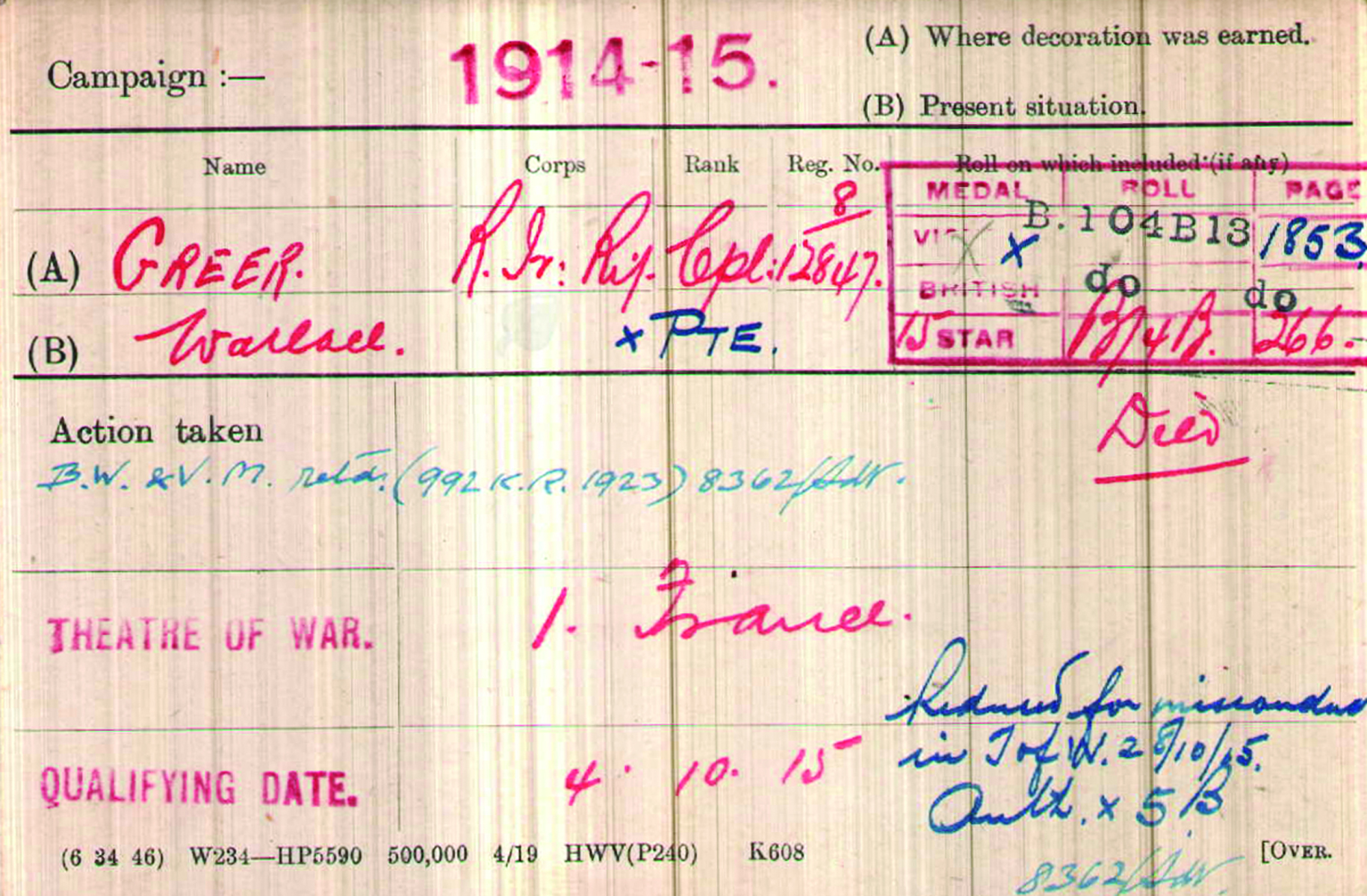 A notice included with issued Great War medals states “the rank engraved on the British War Medal and Victory Medals is the highest rank recorded as having been held in a theatre of war or overseas prior to 11/11/18” (Figure 2). But the medal index card for Pte. Greer indicates that the British War Medal and Victory Medal issued to Greer was named in the rank of “Pte.”  The story from his next of kin is that when his mother (as next of kin) received the medals she was very upset that they were named to him as a Private, rather than as a Corporal (his highest rank in a theater of war) and returned them requesting that they be reissued in the rank of “Corporal” (that the medals were returned is indicated on the medal index card under “Action taken” as “BW & VM retd”). The War Office refused to reissue the medal in the rank of Corporal so the medals were never reissued. In May 2015, after his next of kin requested that they be reissued by the Medal Office his British War Medal and Victory Medal were reissued to his current next-of-kin, but not his 1914-15 Star as that was not returned by his mother. Figures 2 shows the obverses of the medals reissued by the Medal Office in May 2015 and Figure 3 the naming on the Victory Medal which the Medal Office described as “impressed.” The box in which the medal was issued is in Figure 4. 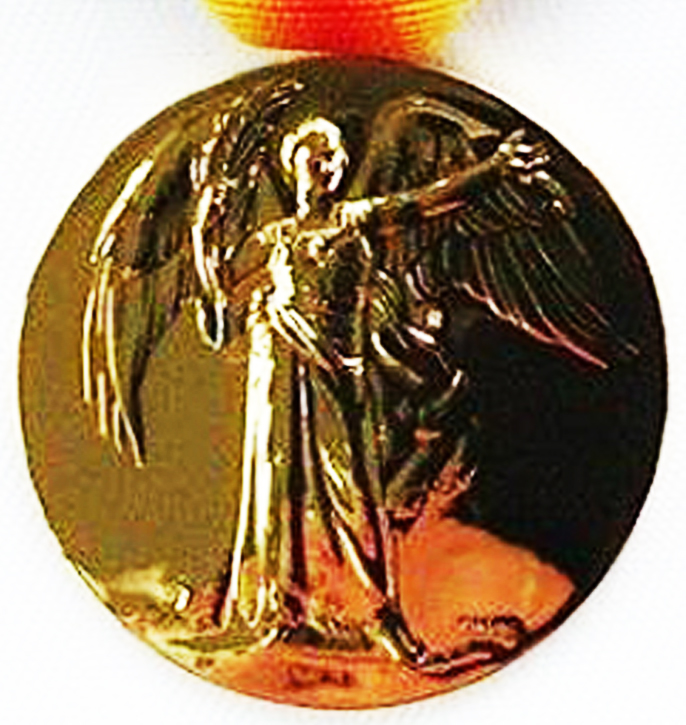 Figure 2a: The obverse of the Victory Medal reissued to the next of kin of Private Greer in May 2015. 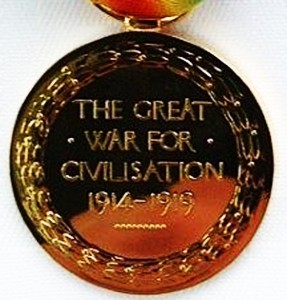 Figure 2b: The reverse of Private Greer’s medal.

Figure 3a: The naming on Private Greer’s reissued Victory Medal.

Figure 3b: More details of the naming on Private Greer’s reissued Victory Medal. 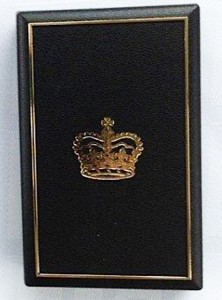 Figure 4: The box for the Victory Medal issued to Private Greer. 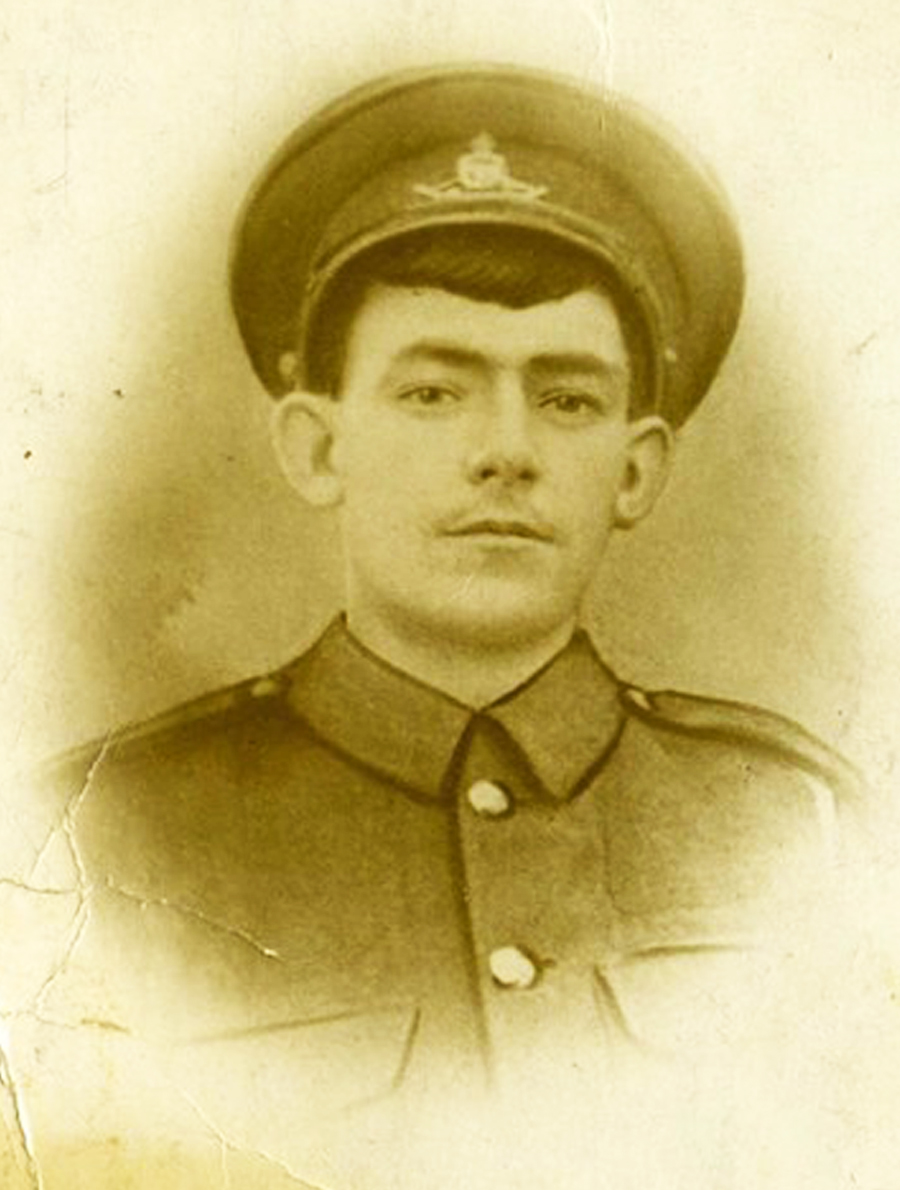 James Woods (Figure 5) enlisted in the 1st East Lancashire Brigade, RFA (TF) in 1909 and went with that unit to Egypt as part of the 42nd Division on 21 September 1914.  In May 1915 he went to Gallipoli and was killed in action there on July 12, 1915.  He is remembered on the Helles Memorial.  His medal index card indicates that he was originally issued a 1914-1915 Star, British War Medal and Victory Medal, but the medal roll for the British War Medal and Victory Medal (Figure 6) indicates that the British War Medal and Victory Medal were “Ret. CRV/2273 4-8-23 KR 1743/ 1912.”  King’s Regulations, 1912, paragraph 1743 indicates that “medals which, at the end of 10 years, still remain unclaimed, will be sent . . . to the deputy director of ordnance stores, Royal Dockyard (Medal Branch) . . . to be broken up.”  According to the family James Woods’ widow died in 1920 from tuberculosis and their young son went to live with his grandparents in a different town. The address that the War Office had for Woods’ next of kin (his wife) was no longer valid and the War Office was not able to find a correct address to send the medals to. 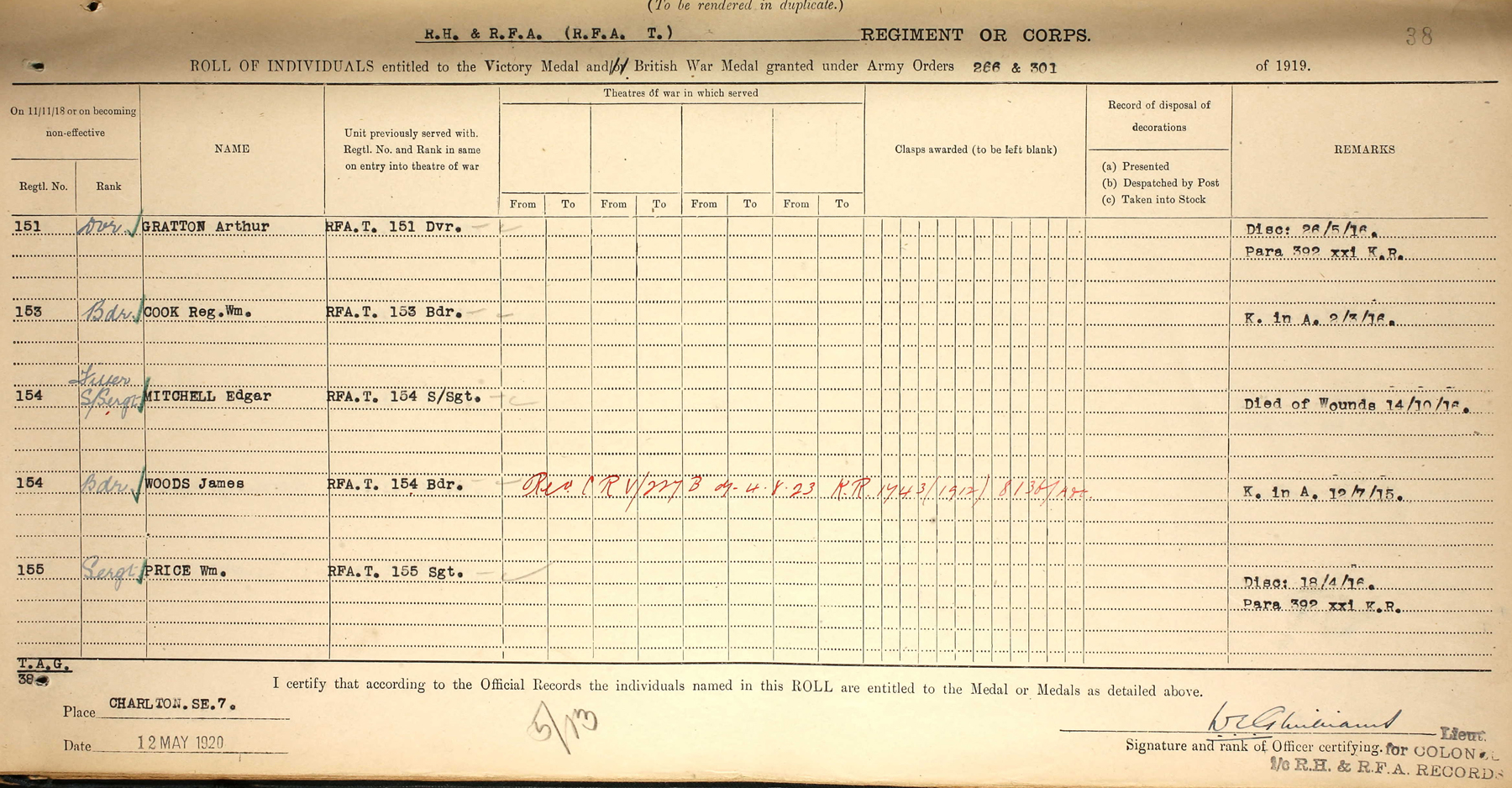 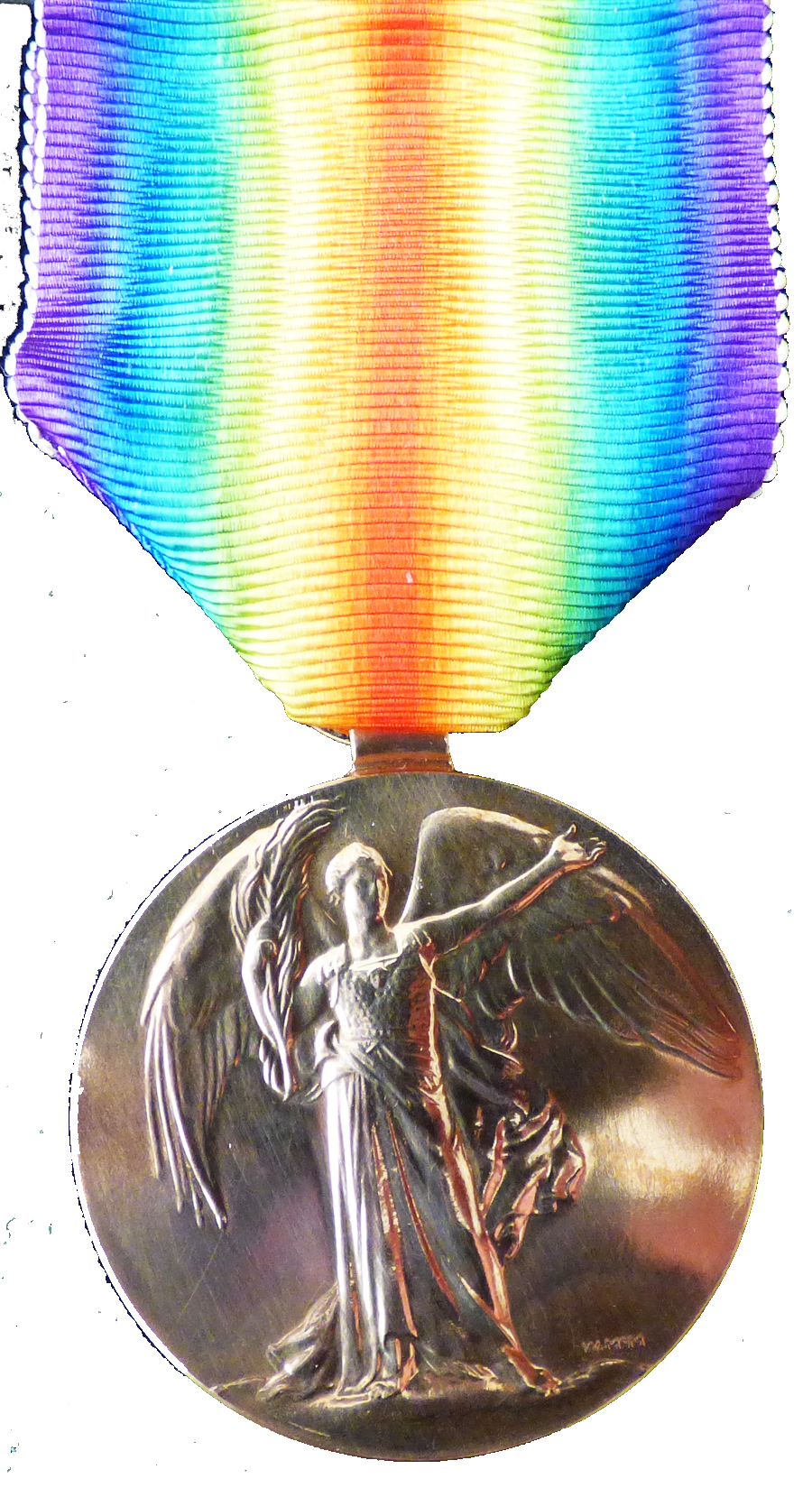 Figure 7: The obverse of the Victory Medal reissued to the next of kin of Bmbr. James Woods, RFA (TF) in February 2016 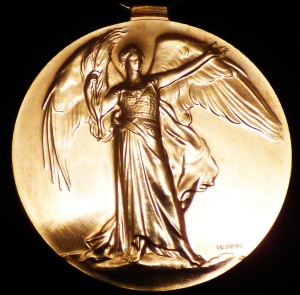 Figure 8a: Detailed images of the obverse of the Victory Medal to Bmbr. Woods. 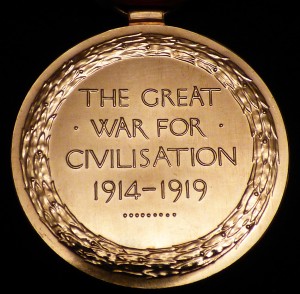 Figure 8b: Detailed images of the reverse of the Victory Medal to Bmbr. Woods.

Figure 9a: The naming on Bombardier Woods’ Victory Medal.

Figure 9b: More details of the naming on Bombardier Woods’ Victory Medal.

Postscript: Recent posts on the Great War Forum indicate that British World War I medals are also being reissued to next-of-kin who can prove that their ancestor’s medals were never issued.  Information on that forum and the Gentleman’s Military Interest Club indicates that Rachel, the Medal Account Manager at  the Royal Mint, has stated that the Type III Victory Medals are currently being produced by the Royal Mint and that they are being named by “one of the old tradition Royal Mint machines which means that we can keep it looking as close to the original engraving font as we can.”  Rachel later revised her comments by stating: “For modern-day medals which we engrave we use a ‘laser tip’ engraver. however to keep to more traditional methods of engraving we use a ‘pantograph’ for all World War I medals.”