When you browse auction catalogs, present ones, as well as older ones, it’s always interesting to see Napoleonic period groups containing the insignia of the Order of the Bath. However, one thing that struck me a long time ago, was that it appeared like these groups were predominantly to the Army. It made me wonder if this was actually the case, and a few years ago, I undertook a study of the London Gazette[1] to trace the naval recipients,  specifically to seek out those who claimed the Naval General Service 1793-1840 (NGS) medal, in addition to being awarded with admission to the Order of the Bath. I’ve created a searchable database of recipients who were awarded a CB and an NGS medal, which can be accessed (here). The database allows search for name, NGS clasp, and other awards. I believe the database is correct up to and including  the Crimean conflict, but it is possible some very late (post 1864) awards of the CB have been overlooked.  Such recipients would have been very young during the Napoleonic War, and could at best have qualified for the Syria clasp. This blog is based on a seminar I gave at the OMSA Convention in Dallas in 2009. 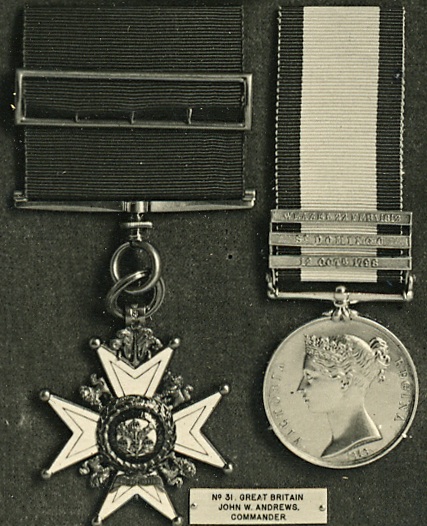 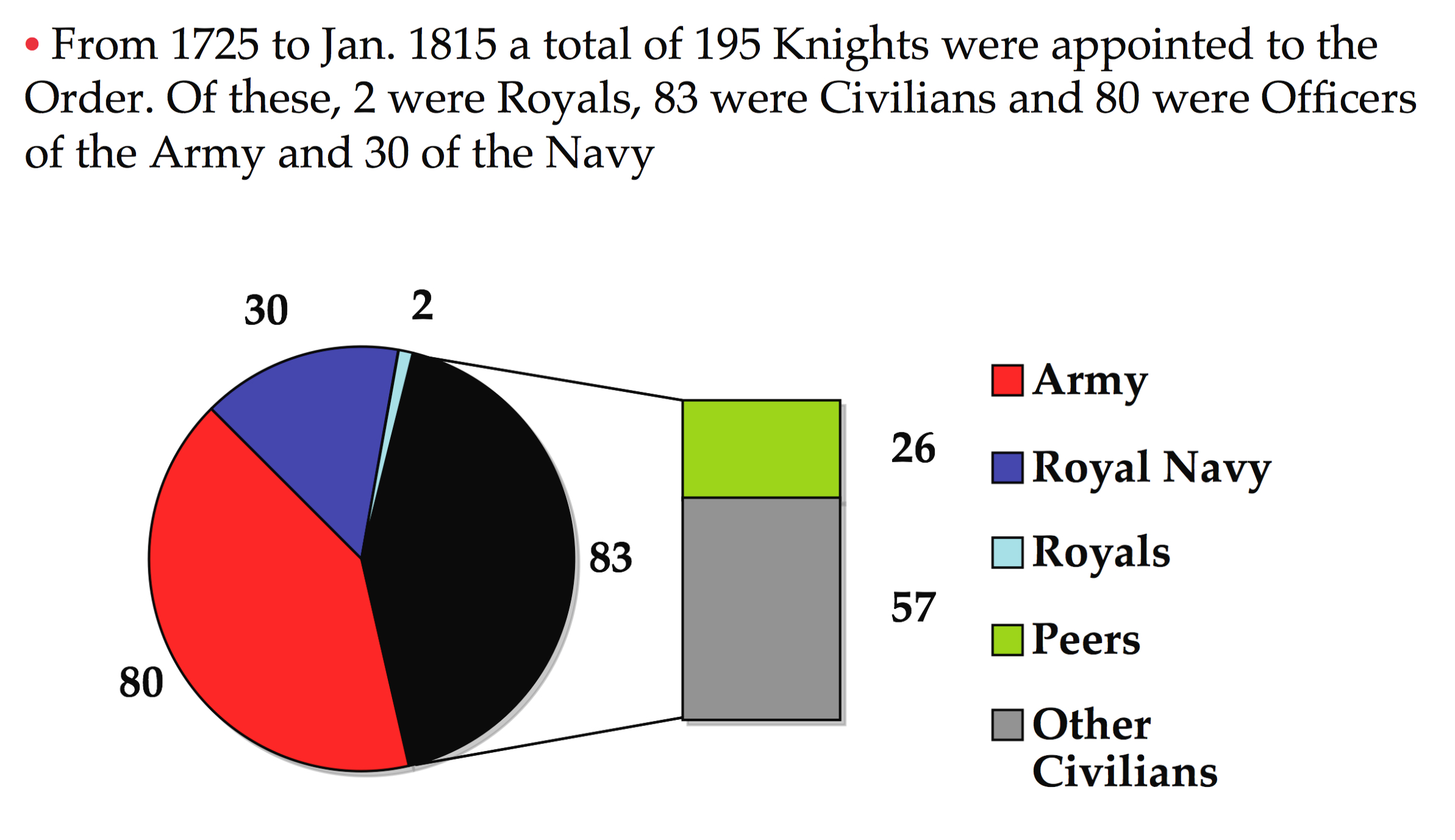 Here, I will only give a brief introduction to The Most Honourable Military Order of the Bath, as it is officially named. The outstanding authoritative work by James Risk[2] should be consulted for more details, also a series of future blogs by ChrisC, will go into details about the various insignia and Army recipients.

The ancient ritual of conferring a Knighthood “by the Bath” dates back several hundred years, but was not formalized into an order until George I, by Letter Patent created the Order in 1725. The statutes called for no more than 35 simultaneous Knights Companions, who were entitled to the post nominal letters ‘KB’. The limitation in the number of Knights Companions was dropped in 1812. Despite its name, the Order was initially mostly used as a political instrument. An honor conferred on men of high positions, both socially and economically. The first installation in 1727 only had three naval or military Knights. From 1727 to January 1815, a total of 195 Knights Companions were appointed to the Order. The social distribution can be seen in Fig. 2, click here for a partial list of naval officers.

Towards the end of the Napoleonic War, it became evident that a great many officers had distinguished themselves and were deserving of recognition. It was decided to reorganize the Order into three classes. Strangely, it was not intended to cover recognition from before 1803, including the French Revolutionary War. The classes were:

Future appointments to the 1st Class were only to come from the 2nd Class. Admission to the order required the recipient to have been awarded a Gold Medal or have been mentioned in the official dispatches as having distinguished himself. Advancement in the Order was tied to the naval (or military) rank of the individual. Initially naval Post-Captains were admitted to the 2nd Class (KCB), but it was later changed to require flag rank (Rear Admiral and above).

All insignia had to be returned upon the death of the recipient. This was apparently adhered to very strictly. Badges and stars were reissued to later recipients. This ruled ceased in 1859 and insignia could be kept by families from then on. This is worth remembering when considering the provenance of a Napoleonic period medal group with insignia of the Bath.

In the three tabs below (click on text), details of the distribution of 1815 awards in the three classes are summarized.

The distribution between the Navy and Army in the 1815 reorganized class is shown in Fig. 3. It is clear the Army with 42 awards, was well ahead of the Navy which only got 18 awards. None of the old Knights Companions (KB) members of the Order, and who were now members of the 1st Class: Knights Grand Crosses (GCB) lived to claim the NGS medal in 1848. This of course, does not mean that there were not recipients of the NGS medal who would eventually be awarded a GCB, however such advancements would come from the lower classes as is indicated above. 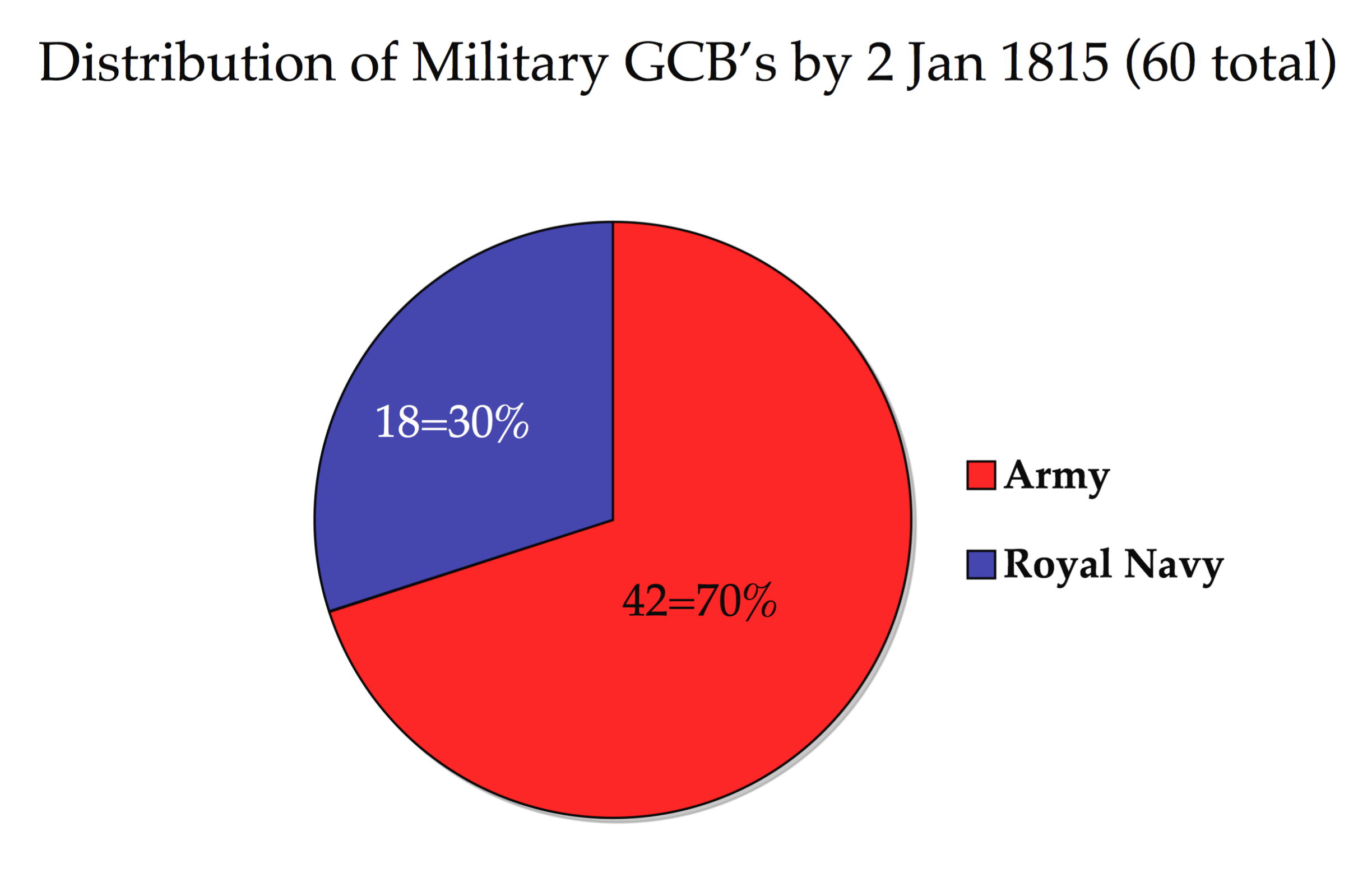 The distribution of KCBs between the Army and Navy was a bit more equitable than the GCBs. Of the 195 total, 100 went to the Army, the Navy got 80 and finally the HEIC got 15. However, only eight of the 1815 KCBs claimed the NGS medal, which is about 10% of the Navy’s share of KCBs. I suspect a similar percentage of the Army was able to claim the MGS medal. The table below indicates the recipients and their NGS clasps. Click on the name to see a portrait of the recipient. 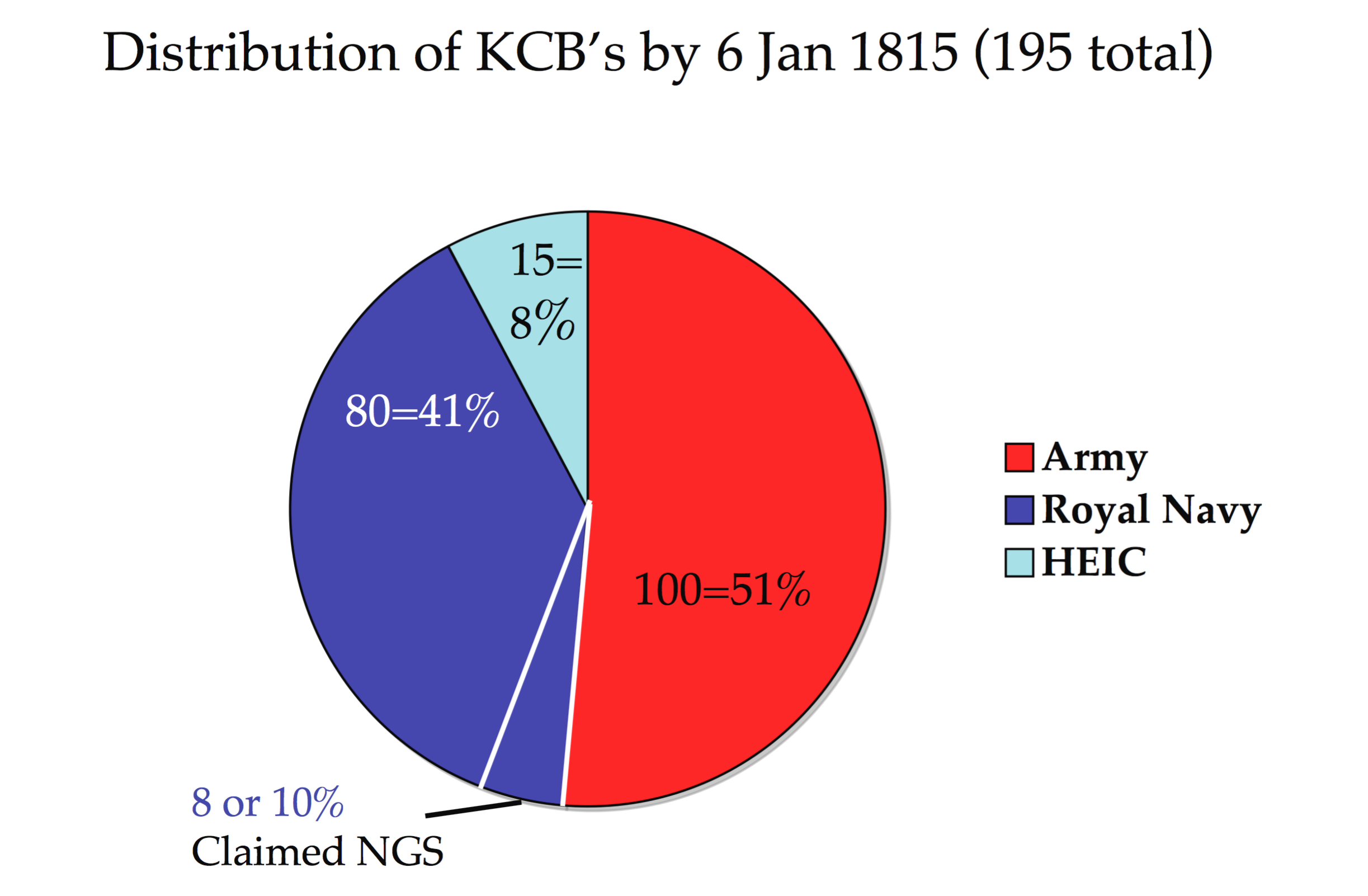 Stopford’s and Cockburn’s medals are in the NMM, Byam Martin’s and Codrington’s are in the RNM, while Talbot’s, Whitshed’s (NGS), and Hamilton’s medals are known to exist and are presumably in private hands. Gordon’s medals seem not to have been sighted.

The awards for Companion of the Bath, were announced in two installments, the first, on 4 June 1815 with a total of 363 recipients, out of which 219 went to the Army, 118 to the Navy, and to the HEIC 26. A second installment, on 8 December 1815, introduced a small correction for officers who somehow had been overlooked. The final numbers were, Army: 227, Navy: 136, and HEIC: 26, for a total of 389 Companions. Of the recipients from the Navy, 47 or ~35% of the share claimed the NGS medal. Just as for the KCBs, I suspect a similar percentage for the Army would have claimed the MGS medal. 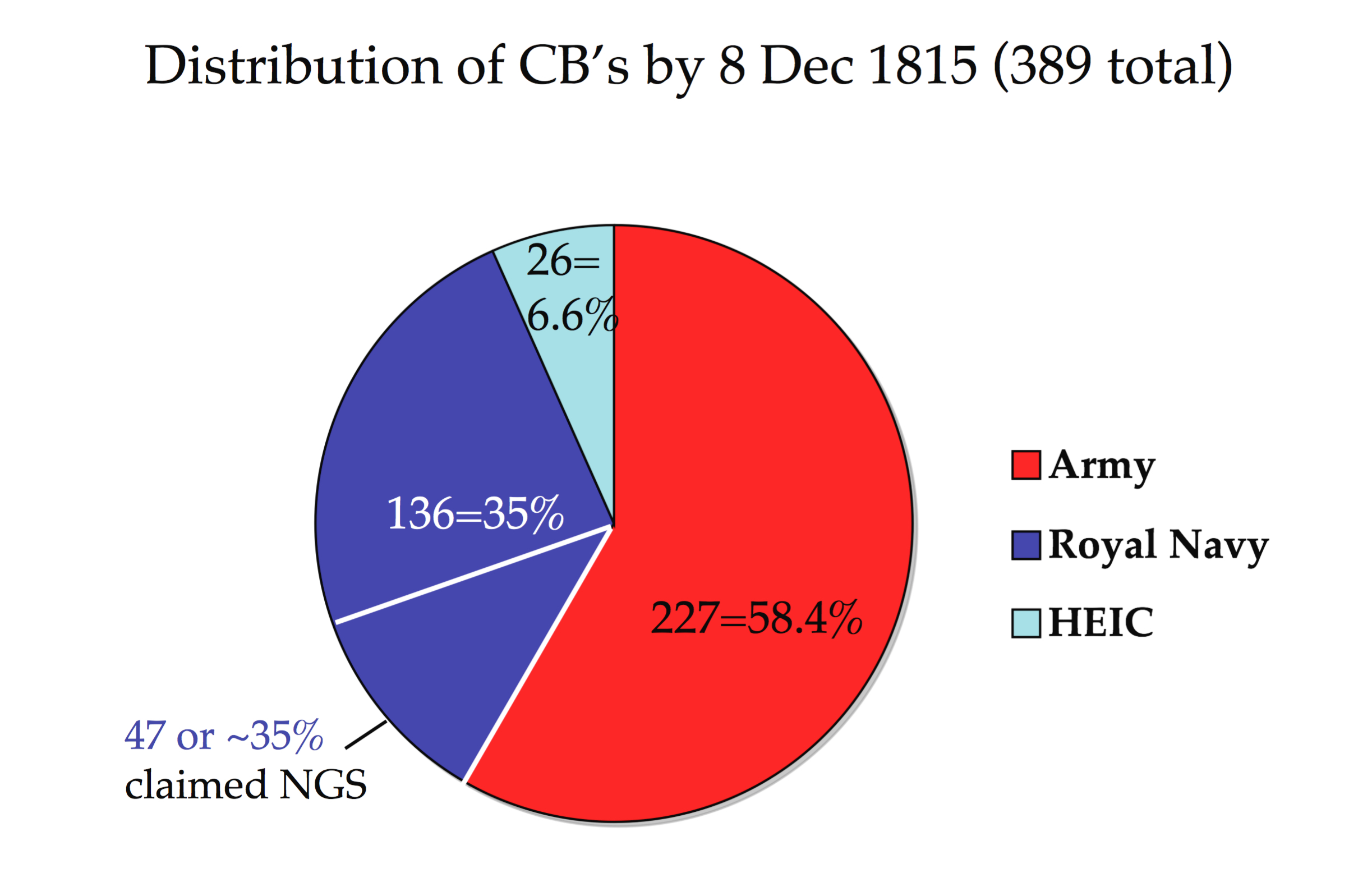 During the period 1816-1850, there were several additional awards of CBs to the Navy, a large number of theses officers had also seen service during the Napoleonic War and close to 53% would eventually claim the NGS medal. The table below summarizes the numbers and the occasion. 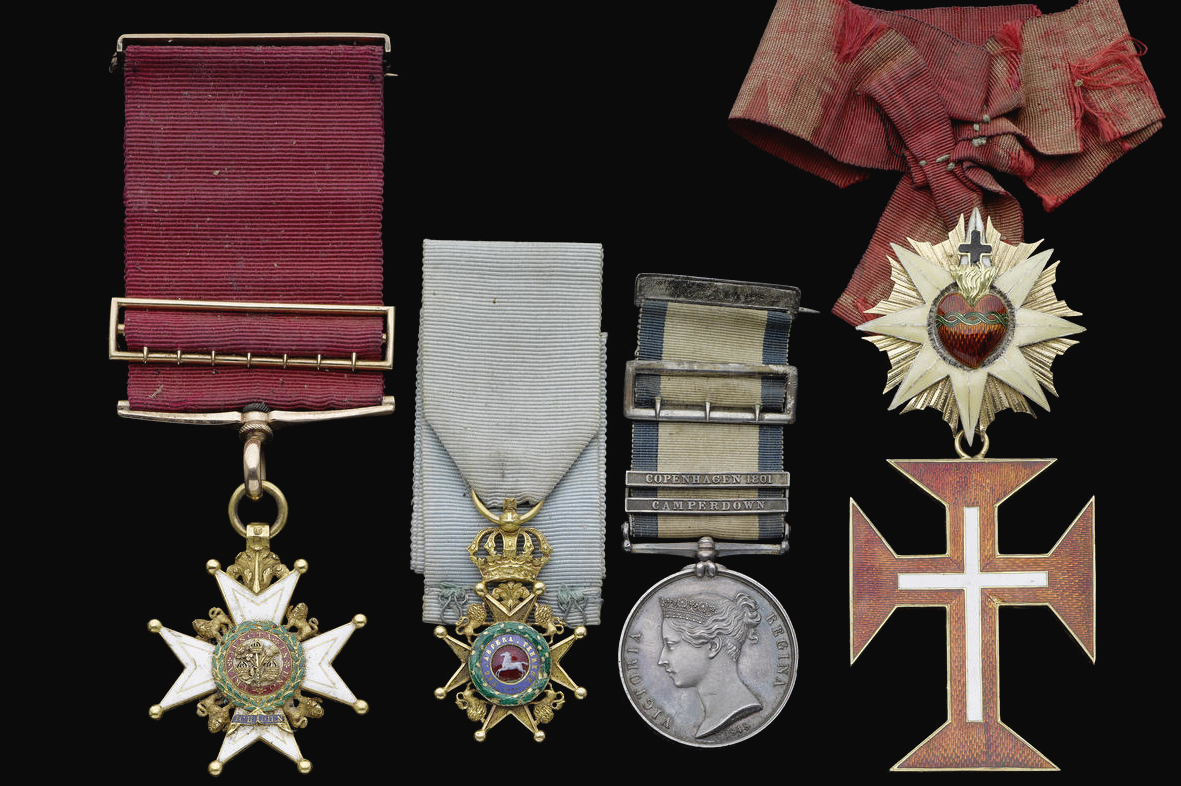 Fig. 6: The CB and NGS group awarded to naval surgeon, Sir George Magrath, MD. His CB was awarded in 1850, for long and meritorious service to the Navy as surgeon and finally Inspector of Hospitals and Fleet. He had also served at Camperdown 1798 and Copenhagen 1801. Also awarded the KH (Civil) and the Portuguese Order of Christ, Knight Commander’s neck badge. Courtesy of Bonhams.

The combination of the awards of the Order of the Bath and the NGS 1793-1840 medal, where the Bath was given for meritorious and gallant service during the Napoleonic wars is quite scarce. Of the 80 naval KCBs awarded in 1815, only 8 claimed the NGS. Of the 136 naval CBs awarded, 47 claimed the NGS. Of these at least 7 are in museums. It is also clear that during 1815 the Army was awarded significantly more GCBs, and CBs than the Navy. The distribution of KCBs was a bit more equitable, but the Navy was still about 20% behind.

Between 1816-1850, about 101 naval CBs were awarded for various conflicts and also to some extent to men who had been overlooked earlier. Of these, 53 men claimed the NGS. Some of them naturally also served in the Napoleonic War. So in total there are about 47 + 53 = 100 CB-NGS groups for officers who were possibly involved in the conflicts 1793-1815, but only 47 of these, were without a doubt given for service in this period.

Post 1850, clearly there were multitudes of Order of the Bath appointments to deserving naval officers, notably for the Crimean conflict and those that followed, however the vast majority of these officers who in addition also claimed the NGS in 1848 (almost exclusively for Syria) would have been very junior during the wars 1793-1815, if at all present.

As mentioned in the introduction, I’ve created a database of naval officers who received the CB and NGS medal, some of these made advancements in the Order and eventually made KCB or GCB. The database lists those advancements as well. However, officers who were appointed directly into the 2nd Class of Knights Commanders (KCB), have not yet been added. Here is the link again.