The New York Central Railroad was founded in 1853 and continued to operate until 1968.  In order to recognize the valor of employees who performed courageous deeds, usually resulting in the prevention of loss of life, the New York Central Railroad commissioned a Valor Medal.  The medal dies were prepared by American sculptor Robert Ingersoll Aitken *May 8, 1878 – †January 3, 1949.  The medals are believed to have been struck by the Medallic Art Company of New York.  The first medals were awarded in 1927 for courageous acts performed in 1926, and awards continued through at least 1963.  There were at least 114 total awards made for acts performed from 1926 through 1963.

The medal was struck in bronze, was 38mm in diameter, and weighed approximately 26.2g (example weighed with ribbon and clasp).  The obverse of the medal depicts a man pushing allegorical death away from a fallen person laying on railroad tracks in the path of an oncoming train engine.  Around this image is the inscription: “NEW · YORK · CENTRAL · LINES”, and “FOR · VALOR”.  The reverse of the medal displays a lighted railroad signal lantern at the top and railroad semaphore signals behind and to each side.  Under this, is a rectangular area for the engraving of the name of the recipient and the date of the deed which led to the award.  Under this area is a winged railroad wheel.  At the bottom is the small marking “AITKEN” for the name of the sculptor and the Latin “FECIT” for “Created by Aitken”.  There is a barrel-shaped suspension lug at the top of the medal through which passes a ribbon ring.  The ribbon is 34mm wide with a 16mm wide white center stripe and two (2) 9mm wide purple side stripes.  At the top, the ribbon is sewn around a bronze pin-backed brooch which was then crimped over the ribbon.

The medal was awarded in a black leather covered case, hinged at the bottom, 74mm wide x 133mm long x 22mm high, with a blue velvet bottom lining, and a blue woven lining inside the top.  The case is marked: “MEDALLIC ART CO./ NEW YORK” on the outside.  Also include in the case was a bronze 17mm screw-backed lapel miniature depicting the obverse of the medal.  This miniature was for everyday wear by the employee as part of their uniform.

Alertness and courage on the part of two New York Central Railroad employees at 10:15 p. m. yesterday frustrated an attempted hold-up in the waiting and baggage rooms of the depot on Railroad street here.

When a gunman approached Tom Flynn of N. St. Clair street, baggage agent, and C. F. Sweitzer of Cleveland, ticket agent, and demanded that the two “stick ’em up,” Mr. Flynn fired a shot at the intruder, barely missing him.

Police Officers R. N. Thornton, Harold Czerr and John Barstow were summoned, and they searched the surrounding neighborhood, but the thug had apparently successfully made a get-away.

Mr. Sweitzer, police said, had observed a suspiciously acting man lolling about the platform in front of the depot.  He went into the baggage room to tell Mr. Flynn of his suspicions.

Mr. Flynn reached for a revolver and was holding it when the gunman entered the room through the waiting room door and snarled his terse command.

“Stick ’em up nothing,” Mr. Flynn answered, as he pulled the trigger.

The gunman made a hasty retreat.  The bullet, it was found, had plowed through the waiting room door only a few inches from where the thug had stood.

Police were free to voice their admiration for the alertness of Mr. Sweitzer and for the courageous action of Mr. Flynn.

The gunman was described as being a short, thick-set man, wearing a dark coat and gray cap.

According to the New York Central Railroad Company, Report of the Board of Directors to the Stockholders for the year ended December 31, 1931:

Since 1926 the company has presented valor medals in recognition of employees who, at the risk of their lives, saved others.

Valor medals were presented to six employees of the company during the year as follows:

Thus, Thomas J. Flynn was one of six employees who were awarded the New York Central Lines Valor Medal for actions during the year 1931.  Ticket Agent C. F. Sweitzer did not receive a medal regarding his actions on September 27, 1931. 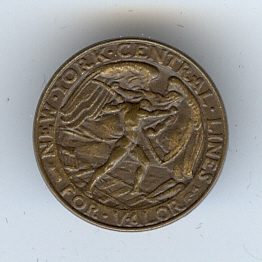 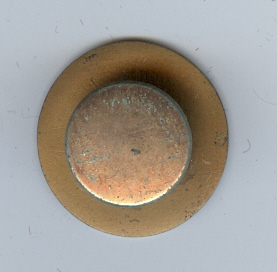 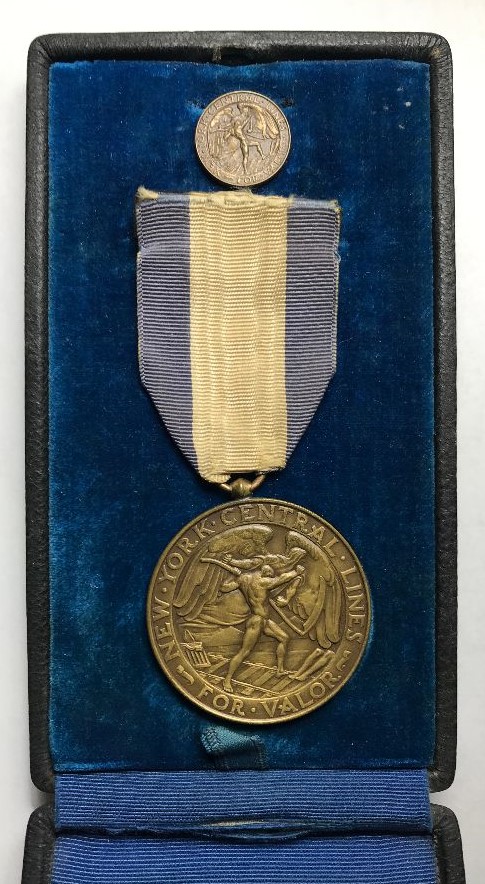 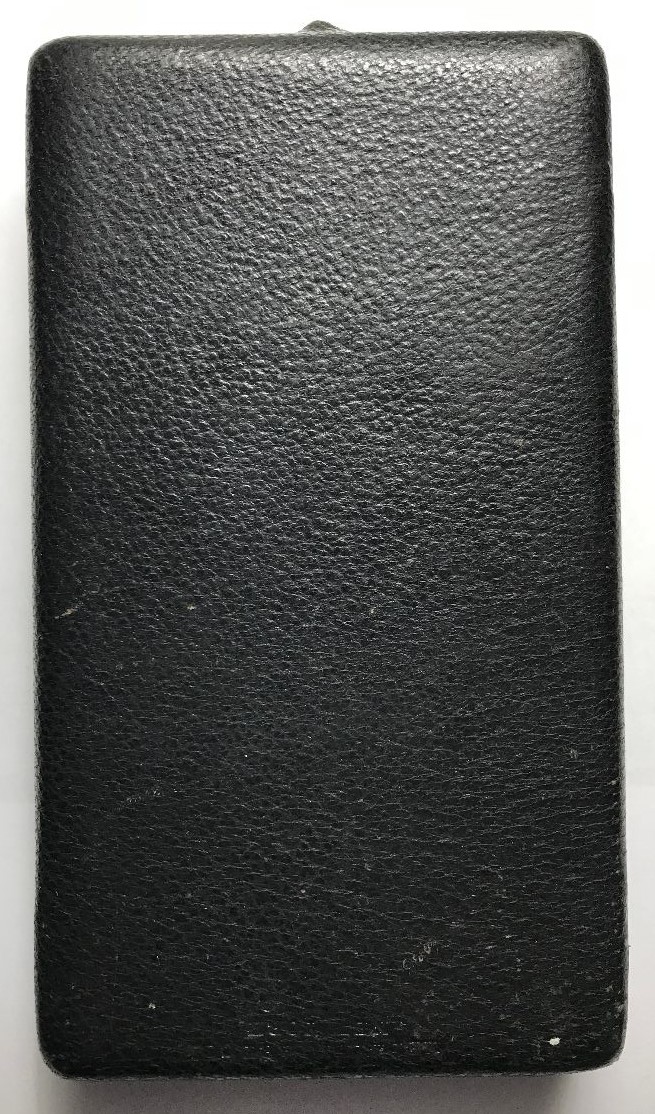 Figure 6: The exterior top of the New York Central Lines Valor Medal case of issue. Image from the author’s archive.

Today, on a wall on the West side of Vanderbilt Hall in Grand Central Terminal in New York, a large bronze plaque survives which lists the names and titles of one hundred fourteen (114) recipients of the New York Central Lines Valor Medal.  At the top of the plaque is a medallion depicting the obverse of the Valor Medal.  Under this, is the inscription: “NEW · YORK · CENTRAL · LINES , HONOR-ROLL”.  Under this line, is the inscription: “In · Recognition · of · Employees · who · at · the · Risk · of · their · Lives/ Saved · others ·”  Underneath, there are four (4) panels which list the recipients by year.  The first three (3) panels were cast in bronze.  The last panel affixed, listing the Valor Medal recipients from 1949 through 1963, was a flat panel with the names of the recipients applied.  The elaborate plaque itself is a fine example of the sculptor’s art and may have also been designed by Robert Ingersoll Aitken.  Since Aitken died in 1949, this could explain why the last panel was not designed and then cast in a foundry like the other panels. 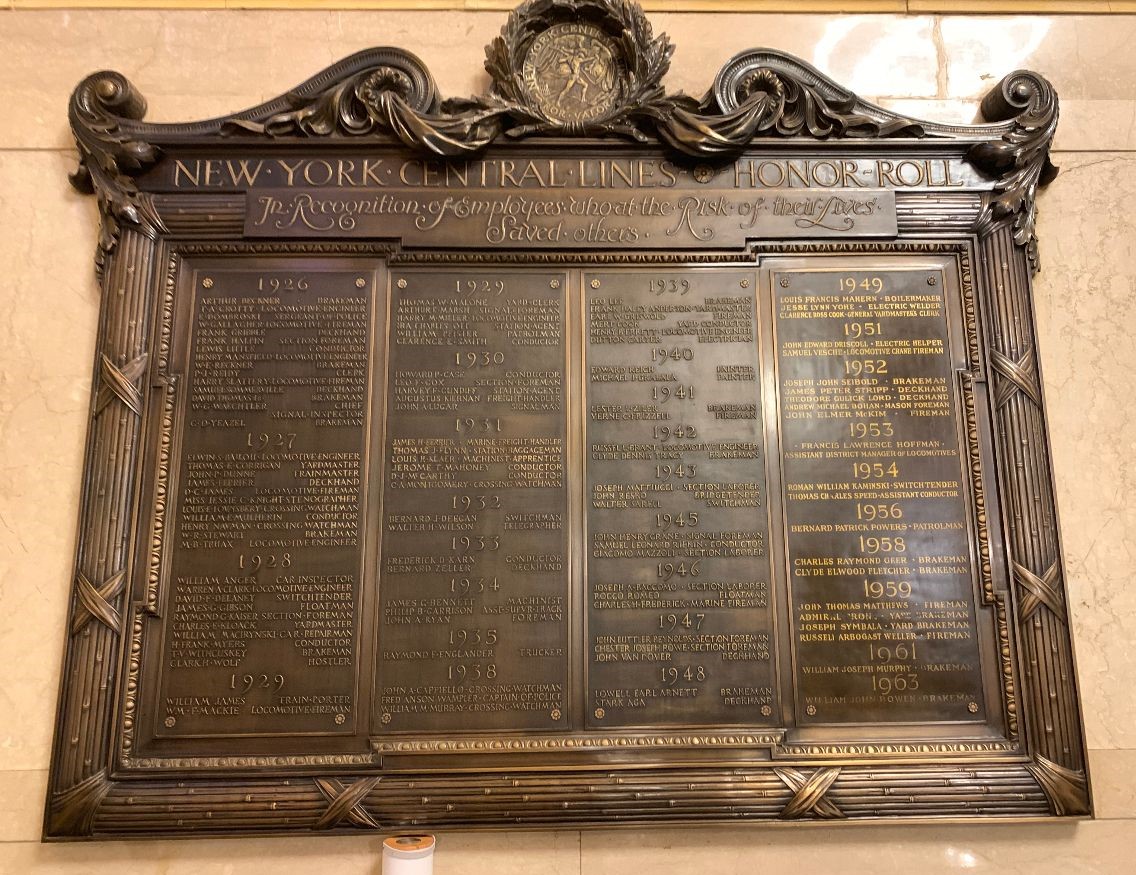 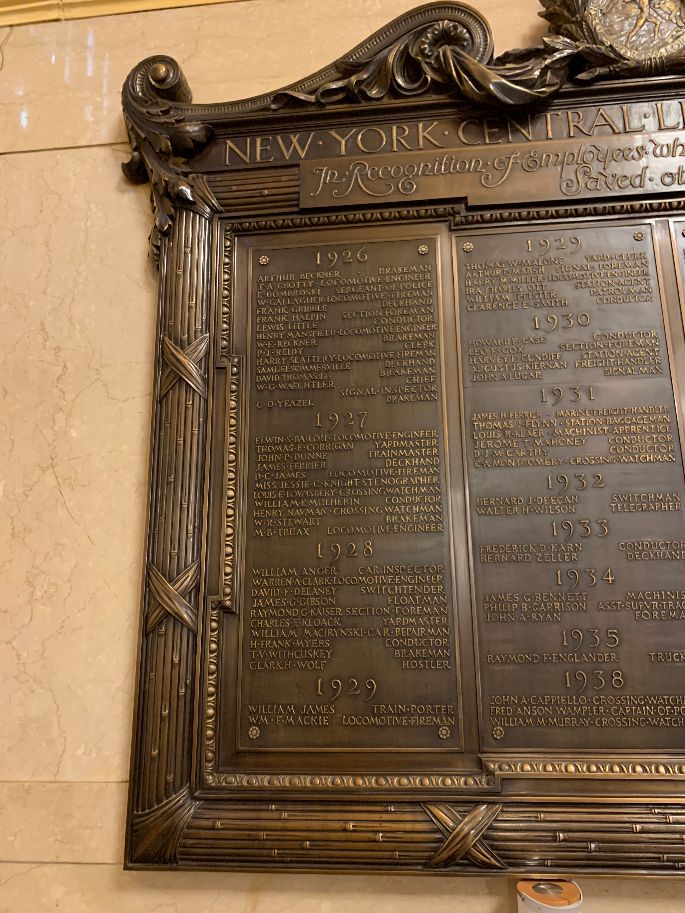 The New York Central Lines Valor Medal recipients listed on the left panel of the plaque are as follows: 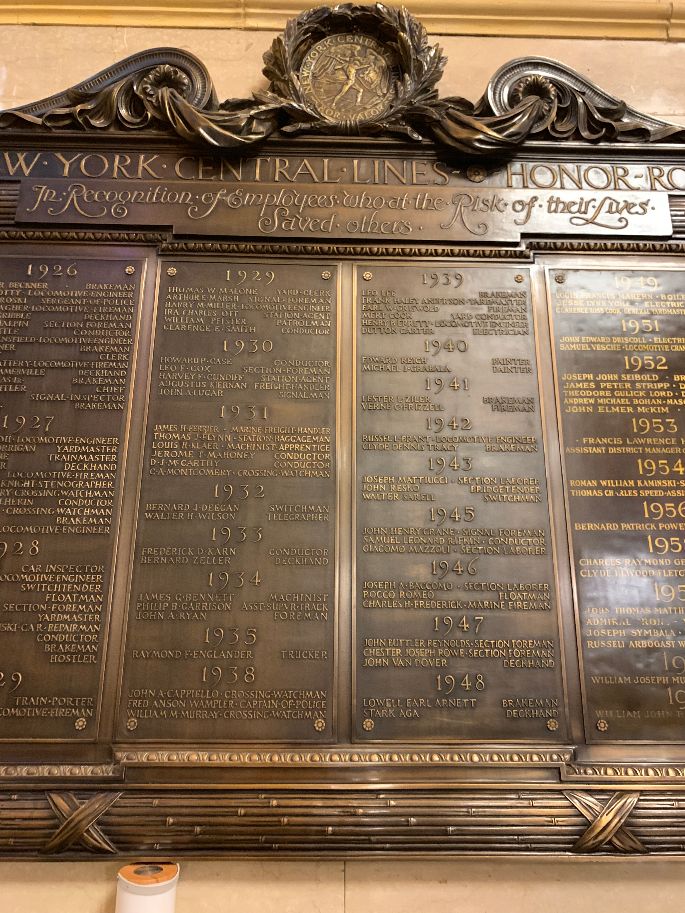 The New York Central Lines Valor Medal recipients listed on the left center panel of the plaque are as follows:

The New York Central Lines Valor Medal recipients listed on the right center panel of the plaque are as follows: 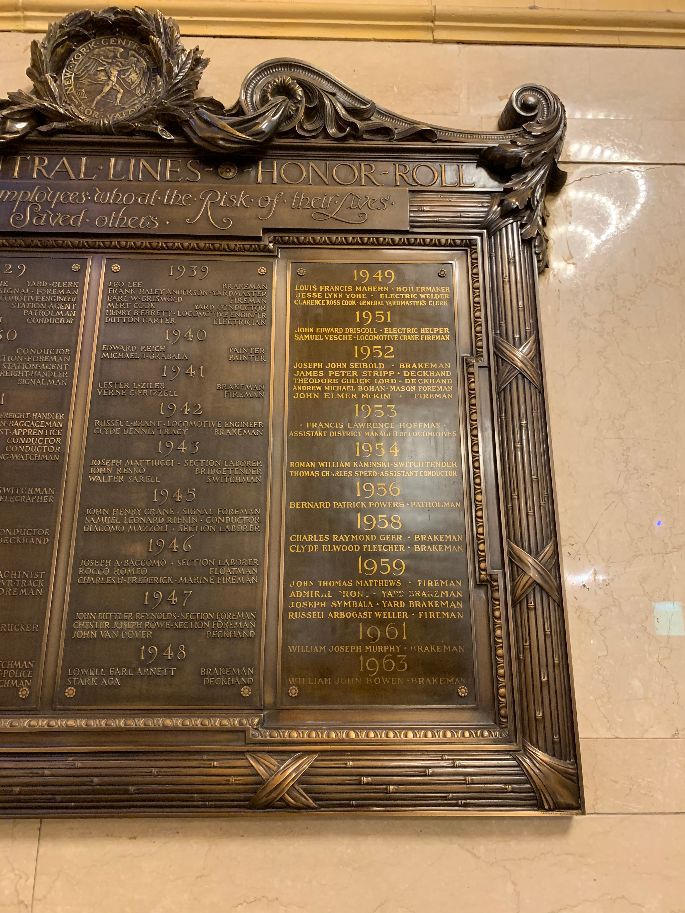 The New York Central Lines Valor Medal recipients listed on the right panel of the plaque are as follows:

Thank you for your interest regarding this article.

I wish to extend my thanks to Bridget C. Stapleton for her photographic contributions to this article.  Without her kind assistance this article would not have been possible.

The New York Central Railroad Company. (1932). Report of the Board of Directors to the Stockholders for the year ended December 31, 1931.  Retrieved from  http://www.canadasouthern.com/caso/annual-reports.htm

For additional examples of medals designed by sculptor Robert Ingersoll Aitken (from the ANS collection):

For additional information regarding the Medallic Art Company:

For additional information regarding the Painesville Depot:

© 2019. All Rights Reserved.  The content displayed in this article (including all photographs) is the intellectual property of the author.  You may not reuse, republish, or reprint such content without the written consent of the author.