The man behind the menu holder

Many medal collectors look at curios made from medals and consider them to be defaced and the practice of converting them to jewelry, belt buckles or other artifacts to be sacrilegious. I find myself drawn to some of them as works of art and if the medal is named, it offers the same research potential as an unadulterated medal; which brings its own rewards.

The content of this blog relates to what are often called menu holders but I believe in practice they commonly held other objects such as place cards. They come in all shapes and sizes and most were made at the end of the 19th century using commonly available medals at the time such as the India General Service medal, the Afghanistan medal and the Egypt medal together with medals from the Crimea and Indian Mutiny, of which there were plenty.

I have seen some that are renamed, erased or defaced in some way but many are in pristine condition and it always interests me in how that particular medal may have ended up on the regimental dining table in the mess hall.

Over the last dozen years, the prices of these curios have risen to the point that there are valued virtually in the same way as a similar medal that is unaltered and although the more common and therefor cheaper medals are usually the ones that appear on the market, a very special collection of a dozen of these in a fitted case appeared at Baldwins earlier this year. The collection was converted in 1896 by Horton and Allday which was a Birmingham based Silversmith that operated from 1888 to 1933. It was remarkable in that it included medals that were not often seen in this converted fashion such as a NGS with Trafalgar clasp, A four clasp MGS, a multi clasp Crimea medal to a Light Brigade casualty and potentially other highly sought after medals. It therefor didn’t come as much of a surprise to many collectors when the hammer price on the lot was £11,000!

The title of my blog however is about a relatively common medal; an Egypt medal with a clasp for The Nile 1884-85 named to 1464. Pte. R. COWAN . 1/ CAMn HIGH rs. It too was converted to a menu holder by Horton and Allday   and this particular example has a hallmark from 1899.

Robert Cowan was born in Dumbarton on January 11 1857. In the 1871 census his family was residing in Glasgow and he is shown as living at home with parents James and Elizabeth and siblings  James, Elizabeth, Mary and Margaret.

When he attested on January 12th 1879, he gave his occupation as a shoemaker. His enlistment documents indicate some prior service in the 2nd Lanark Militia.

His first impressions of army life couldn’t have been positive since he deserted only 4 months later and 6 months after that he rejoined awaiting trial and was sentenced to 60 days. He was released from prison on Jan 24th, 1879 and deserted the following week!

He rejoined  4 years later and was imprisoned for 90 days and following his release he served peacefully for 5 years earning some good conduct pay along the way.

He served a total of 3 years and 335 days in Egypt with the remaining time at home. The Egypt medal (and Star) were his only medals. His medical records indicate he suffered from some common soldier’s complaints while serving in Egypt. Pte. Cowan was transferred into the reserve in April 1888 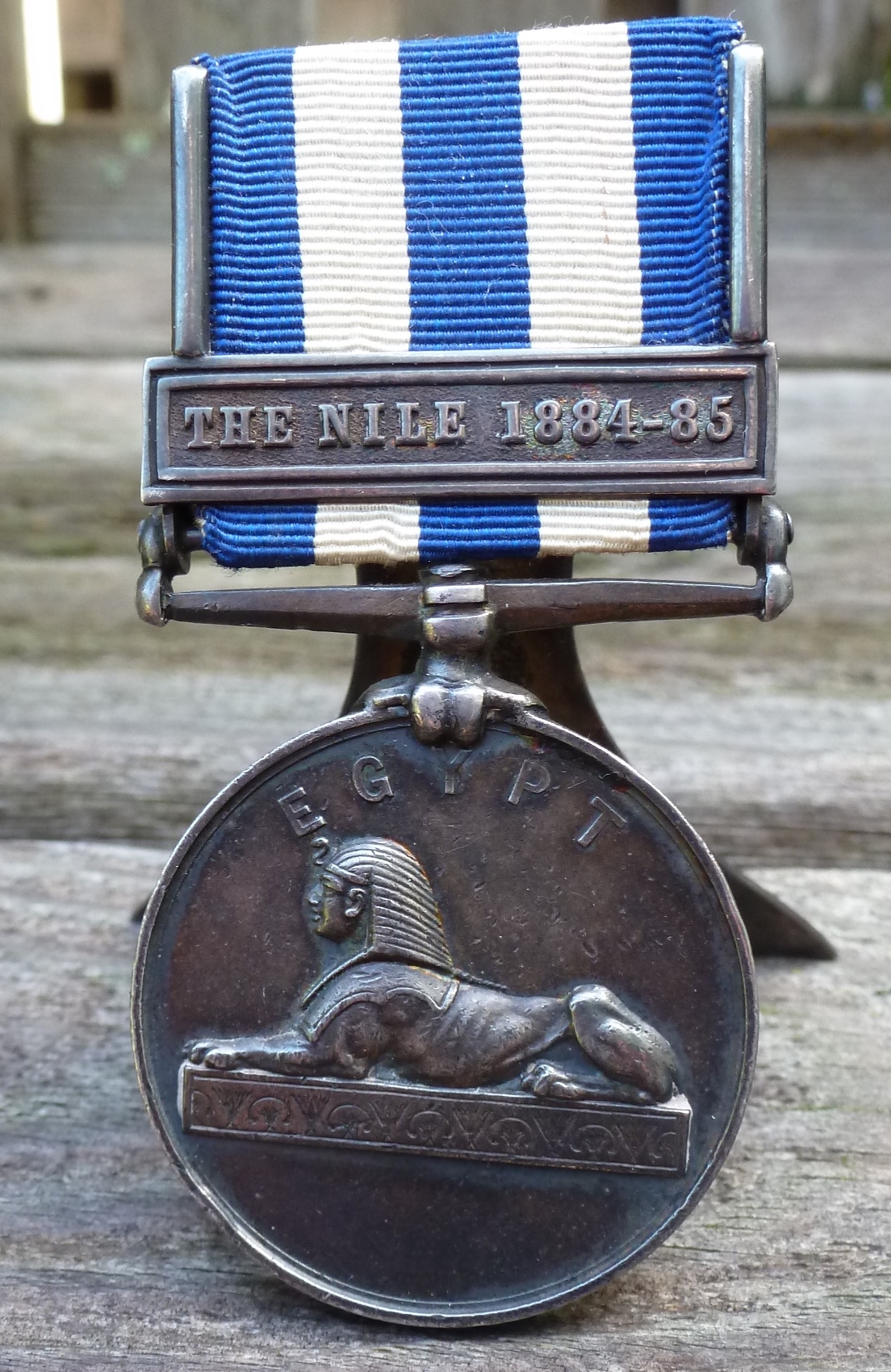 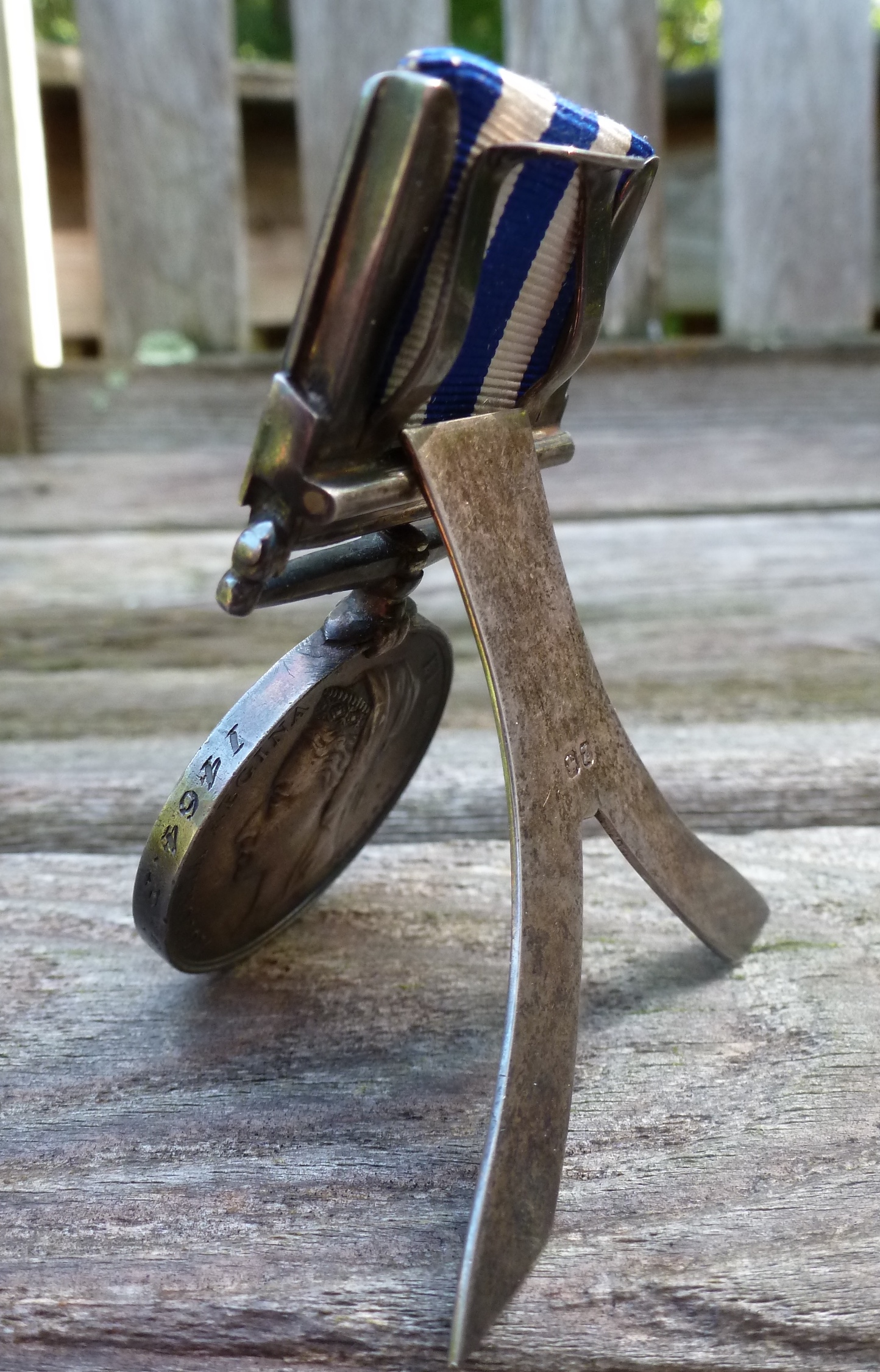 A common parlor game is to ask your companions who from history would they like to have dinner with? As medal collectors we might think of Nelson, Wellington, Napoleon or other well known leaders. One idea I had was to imagine a dinner with the dozen men whose medals were converted into place holders and sold at Baldwins. I imagine that a gathering with such a cross section of men from different walks of life and who were in battle at different times spanning more than 80 years of the 19th century would make for a remarkable dinner conversation and of course the placeholders would be a perfect ice breaker.