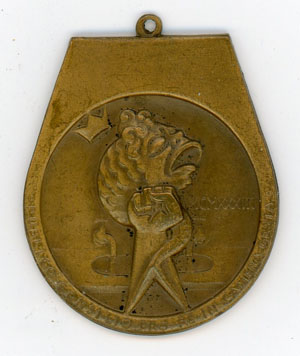 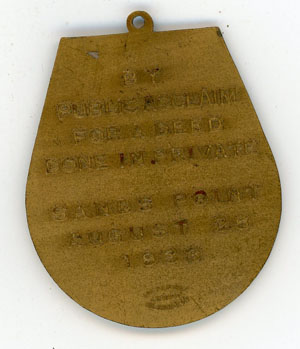 Donald Trump is not the first controversial politician in American history and probably won’t be the last. Governor (later Senator), Huey P. Long, of Louisiana, was among the most controversial politicians of his time and will always rank near the top of the list for colorful statements. But, politics only play a peripheral role in what is known as the “Huey Long Toilet Seat Medal”.

The bronze medal, 38x33mm, is in the shape of a toilet seat. The obverse depicts a fish being punched in the face and losing its crown (Long was called “The Kingfish”). Two bathroom faucets run the background, which also bears the year “MCMXXXIII” [1933] of the event. A Latin inscription around the edge is often translated as “Public acclaim for a deed done in private”. The reverse of the medal bears that translation and “Sands Point/August 26.1933″. The medal is marked by the Medallic Art Company on the reverse and bears the artist’s initials, GZ (George de Zayas), on the obverse. There is a small integral loop at the top of the medal, although there was never a further suspension.

The medal commemorates a social function held at the Sands Point Country Club, on Long Island, New York. Long was preparing to run for president against Franklin D. Roosevelt in 1936 and had been building his campaign on the slogans “Share the Wealth” and “Every man a king, but no one wears a crown”. Long’s rhetoric made him many enemies among the country club set, so his presence at Sands Point was probably not appreciated. As was his habit, Long drank heavily that evening and, when nature called, he went to the men’s room, only the discover that every facility was occupied. The story goes that he relived himself on the shoes and pants leg of the man standing next to him. That man, who has never been identified, took some umbrage and proceeded to punch Long in the face, giving him a black eye that was featured in the anti-Long press for some time. The owner of Colliers Magazine was so pleased with the incident that he began to raise funds to recognize Long’s assailant with a gold medal. The assailant never came forward to claim his medal, so Colliers gave the medal to the American Numismatic Society. In addition to the gold medal, Medallic Art Company struck a few in silver and a larger number in bronze. The galvano pattern of the medal hung in the public men’s room of the Medallic Art Company’s plant for many years.

Huey Long (1893-1935) was a charismatic and controversial Louisiana politician. Starting his political career on the Louisiana Public Service Commission, he won the governorship in 1928. His administration greatly increased expenditures on public education, infrastructure and public services. For many years, practically every major bridge in Louisiana was the “Huey P. Long Bridge”. Becoming a senator in 1932, he became a vocal opponent of the New Deal and Franklin D. Roosevelt. Exploring the possibility of a presidential bid in 1936, Long was assassinated in the Louisiana State House on 8 September 1935. Controversy and charges of corruption followed Long throughout his career.

While the Toilet Seat Medal has no known recipient, it still stands as “public acclaim for a deed done in private”.