The clasps on the Queen’s South Africa Medal

The Anglo- Boer war 1899-1902 sometimes known and the 2nd Boer War was the last major conflict that occurred during Queen Victoria’s reign and the largest. The British and Commonwealth participants numbered in excess of 400,000. As a result, the medal is not uncommon and the wide variety of clasps offers the collector a limitless permutation of interesting combinations of different examples of the medal.

The war had 3 distinct phases:

26 clasps in total were awarded for this medal; 5 “State” clasps, 2 “Date” clasps and 19 “Battle” clasps. Each clasp was subject to various conditions that had to be met to be awarded and rules were established whereby certain clasps could not awarded together. The first clasp earned was to be worn next to the medal and each subsequent clasp in succession in other words reading up

The State clasps were awarded in cases for operations in those states where no battle clasp had been awarded to the participant. Natal and Rhodesia had a qualifying period which ended in June 1900 and May 1900 respectively whereas the other three: Cape Colony, Orange Free State and Transvaal were awarded up to the end of the war. The result of this is that for service the guerilla war, the majority of medals were issued with one or more of these three State clasps and either a King’s South Africa medal or date clasps added to the QSA.

The clasps were deemed to be “earned” in a specific order in that some clasps like the Relief of Mafeking (ended May 1900) can actually appears on a medal before the Defence of Kimberley to a participant who defended one town and then participated in the relief of another. This came about I suppose in that the former clasp was “earned” by some as early as October 11, 1899 whereas the qualification for the latter clasp began on October 14 of that year.

Knowledge of “typical” clasp entitlement for a given regiment can give clues to the possibility of something worthy of further research. For example, a QSA medal within a group to a private in the Seaforth Highlanders is likely to have several “state” clasps. When a medal appears with the single clasp Cape Colony it can sometimes be an indication of a Magersfontein casualty, which is for many a much more desirable medal.

A more obvious example would be when another “expected’ clasp is obviously missing in the case of the 2nd Battalion Gordon Highlanders who were besieged at Ladysmith. Half the battalion participated in the battle of Elandslaagte then retreated back to town. The other half remained in Ladysmith. If a medal to the regiment has an Elandslaagte clasp then the man was a member of one of the 4 companies that took part in the battle. If it doesn’t also have a Defence of Ladysmith clasp then in all likelihood he was a casualty. In fact for the 2nd battalion one would expect that if the man stayed with the battalion, he would have earned the Laing’s Nek and Belfast clasps and failure to see these clasps on the medal may be the sign of a departure from the norm and an interesting recipient.

The other clasp anomalies may not be “good” news and may in fact be the result of an error or worse. As well as the clasps appearing in a particular order, there are several “rules” that need to be remembered and for some of the rules it is helpful to know the geography of the British Colonies and Boer Republics since several rules stipulate that a state clasp could not appear on the same medal as a clasp for an action in that State. Since Wepener is in the Orange Free State if I discovered a medal with both these clasps on it, then something would be amiss. 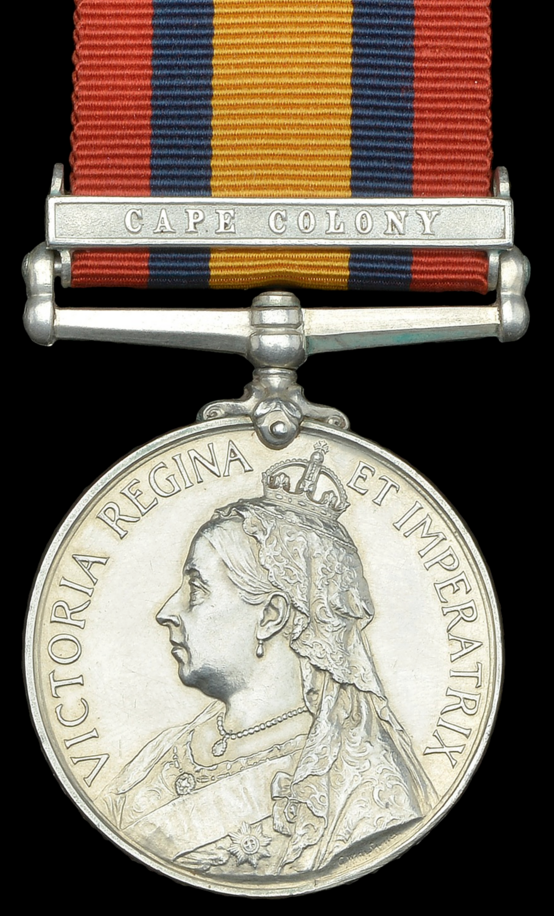 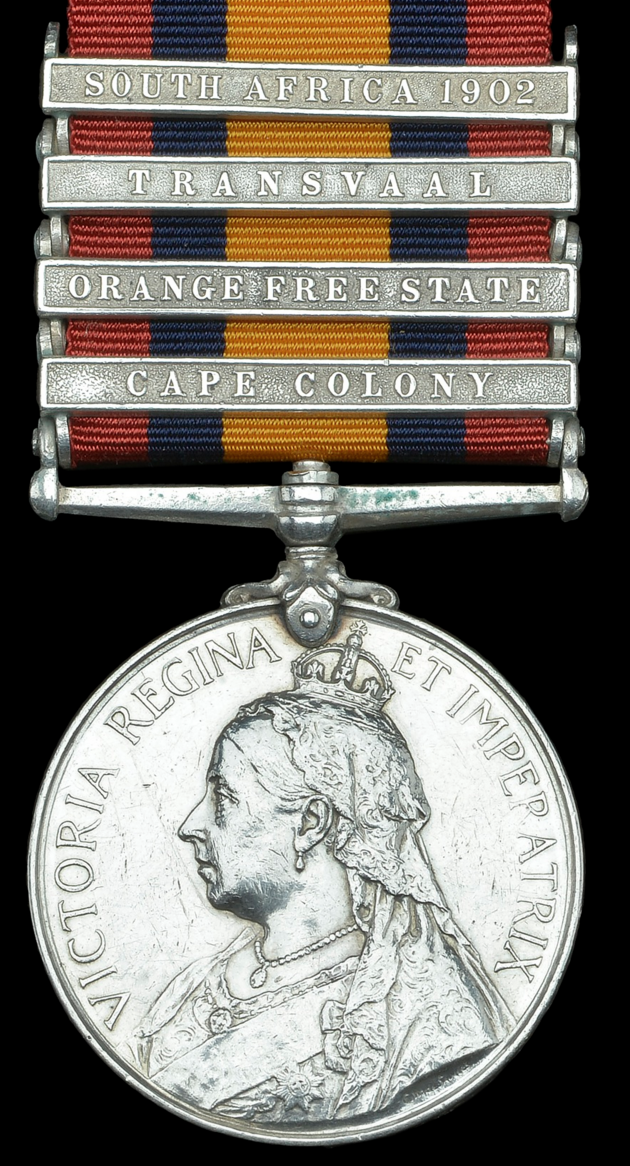 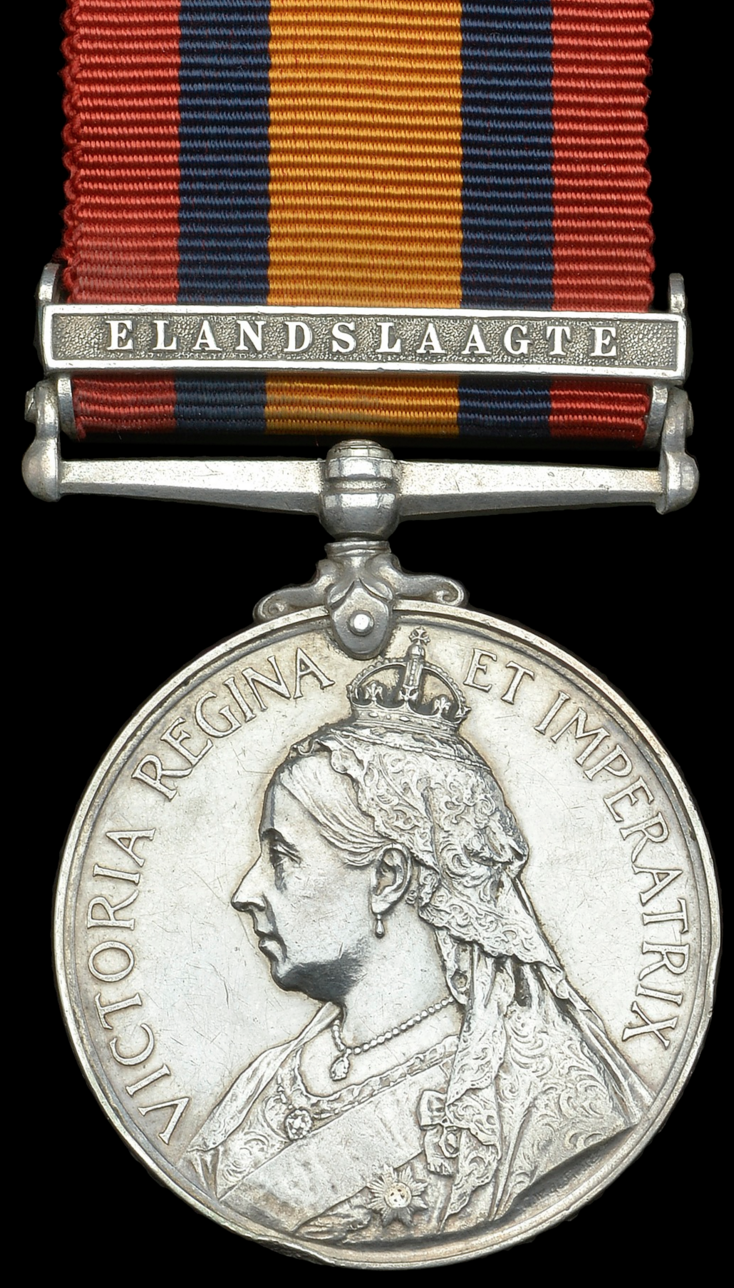 This table showing the locations associated with the battle clasps may help:

I have seen examples of biographical extracts of medal entitlement with numbers signifying the awarded clasps and without a secret decoder ring it would be quite difficult to establish the clasp entitlement. If there was a notation that a man was awarded clasps 14, 15 and 16 for example, it would signify the 14th, 15th, 16th ordered clasp on the roll, which would be Cape Colony, Orange Free State and Transvaal.

I think the QSA offers the medal collector an example of the last campaign medal with such a wide range of stories evidenced by the clasps on the medal. This large scale conflict bore little resemblance of what was to come. Just 12 years later, the first world war brought about a conflict that for many Boer War veterans would have been unimaginable and for the medal collector, the lack of clasps on first world war medals gave rise to the inability to differentiate medals to men who had vastly different experiences on the battlefield.