The Baden Military Karl Friedrich Merit Medal is a rather interesting award, as unlike the awards of most other German states, each awarded medal was officially engraved with the name of the recipient.  There are some other awards that come to mind however, such as the Hannover and Braunschweig Waterloo Medals, and other Hanoverian medals, that were officially impressed on their edges with the rank (or title), name, and unit of the recipient in the style of British medals.  Some awards (such as the Iron Cross 1st Class) are also sometimes found with names and dedications unofficially added. 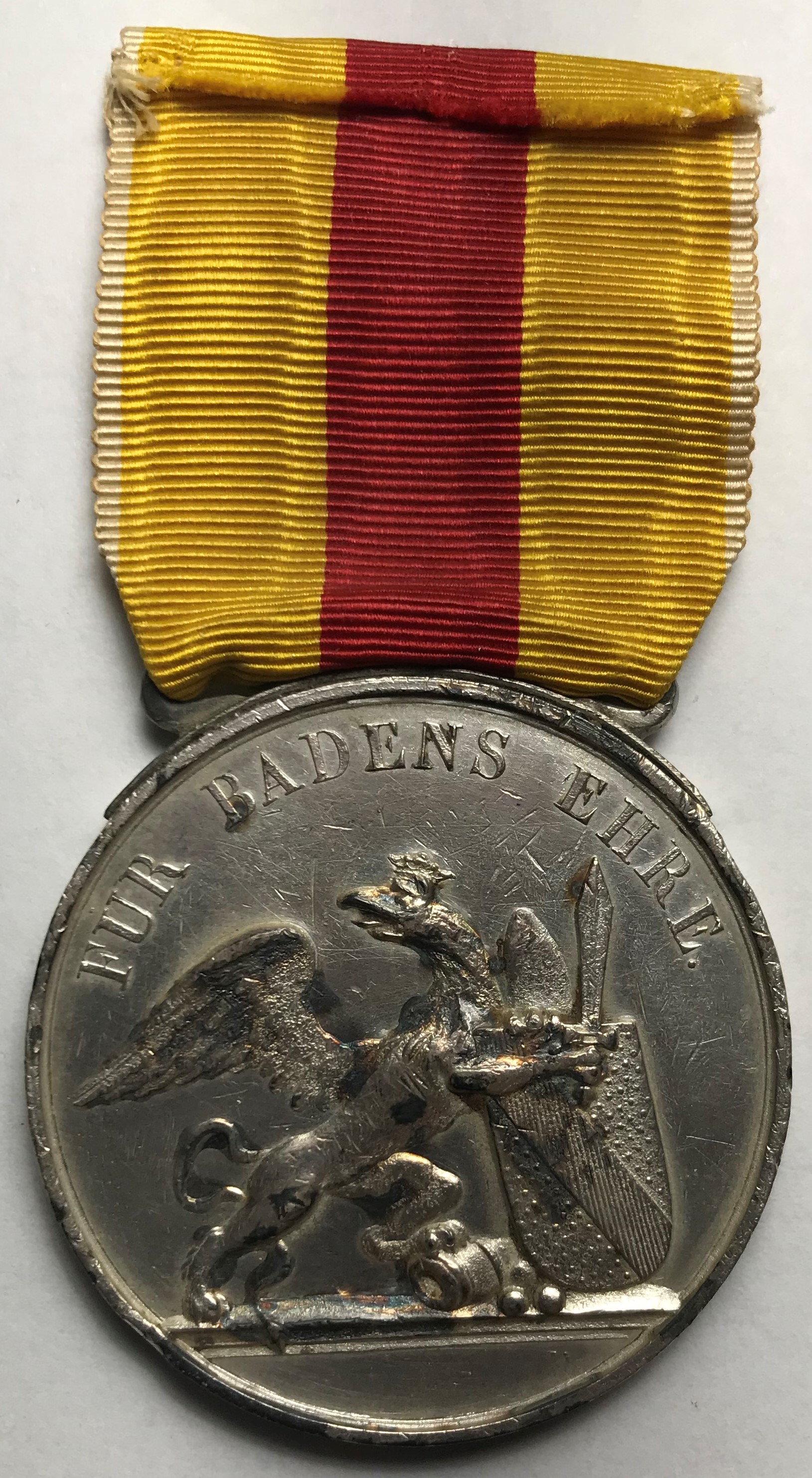 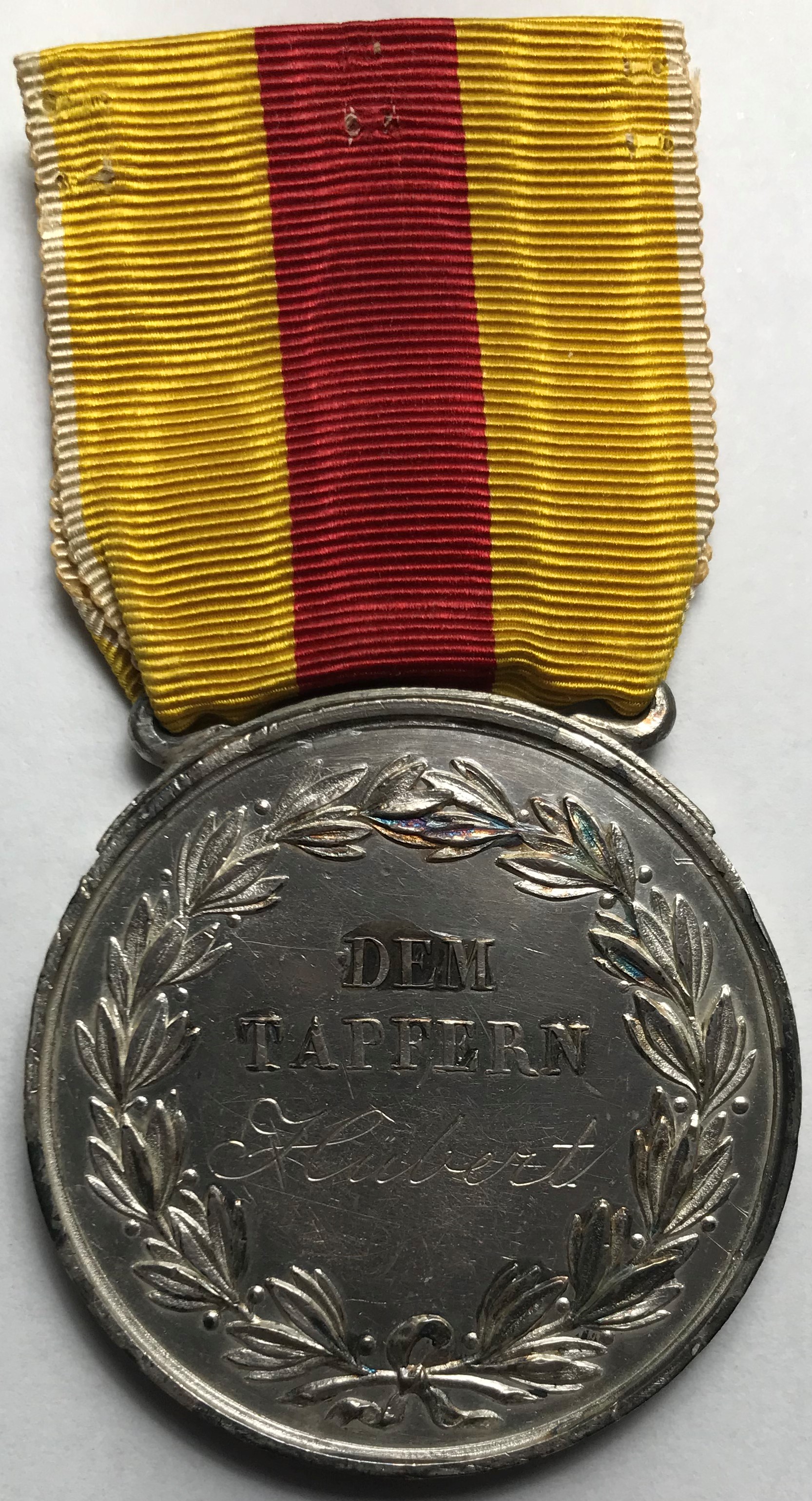 This example of a Baden Military Karl Friedrich Merit Medal is engraved on the reverse with the name “Hübert” in script.  Here is the entry listed by researcher and author Frank Zelosko that corresponds to this medal:

This translates to: “Hübert.  Landwehr Soldier in the Royal Prussian Landwehr Battalion Aschersleben.  Silver Medal on August 18 (October 27) 1849”.  I believe that this indicates that Hübert was actually awarded the medal on August 18, 1849, and that the award was officially recorded on October 27, 1849.  Unfortunately, the specific action by Wehrmann Hübert which led to his award of this medal is unknown.

The medal is 40mm in diameter and was struck in silver.  This example weighs 35.62g (ribbon included).    This medal was struck in 1849 utilizing the 5th in the series of die combinations that began being utilized in 1807.  Note that some sources may have catalogued additional dies utilized to strike this series of medals, thus this sequential number may not reflect the most current research available.  The obverse die that had the Die-Sinker’s (Mint Master’s) marking “DF” [for Doell and Fecit (made by)] on the lower right side below the support for the shield.  Due to this medal possibly being struck later in the striking process and resultant die wear, only remnants of the letter “D” are barely visible, and the letter “F” cannot be seen.  Die Sinker Carl Wilhelm Doell was born on May 19, 1787.  From 1810 he was the Mint Master in Mannheim, and from 1826 until 1848 he was the Mint Master in Karlsruhe.  Doell died on March 31, 1848.

The original ribbon for this medal was 36mm wide, with a 13mm wide red middle stripe, two golden-yellow 10mm wide side stripes, and 1.5mm wide white edges.  This is the same ribbon as was worn with the Baden Military Karl Friedrich Order Knight’s Cross.  The ribbons were woven from silk.  The ribbon shown on the medal awarded to Wehrmann Hübert is a later replacement (most likely from the Great War period).

This example was polished by a collector a long time ago and then a coating of shellac was added.  Thus, patina can be seen where the shellac chipped off or was worn off, which thus exposed the silver and caused oxidation.

In 1849 the III. Battalion (Aschersleben) of the Royal Prussian 27th Landwehr Regiment commanded by Major Bogislaw von Ciesielski (*January 12, 1801 – †January 9, 1872) fought at the Battles of Ladenburg and Heidelberg on June, 21, 1849, and in the Battles at Federbach and Hirschgrund in the Grand Duchy of Baden on June 29, 1849.

During the Battle at Federbach:

The Aschersleben Landwehr Battalion, under Major v. Ciesielski;, together with the battalion of the 25th Infantry-Regiment not only blocked the enemy’s attack on the bridge over the Federbach, but even threw it back far.

While pursuing the enemy beyond the bridge over the Federbach, the 11th Company of the 3rd Battalion (Aschersleben) of the 27th Landwehr Regiment captured a flag bearing the inscription: “Freiheit, Gliechheit, Verbrüderung. Die deutsche Legion in der Schweiz.” (“Freedom, equality, brotherhood. The German Legion in Switzerland.”).

It was also noted regarding this Battle:

The Division and Corps reports do not always match the detailed reports of the lower commanders. After this, the Battalion was repelled with a loss, and on its retreat, after 8 hours of almost unflappable fighting, it arrived back in Muggensturm at 9 o’clock in the evening, completely exhausted. Incidentally, the divisional report also says “that the battle was a very serious one and presented some unpleasant moments.”

Thank you for your interest in this article.  Comments are welcome.