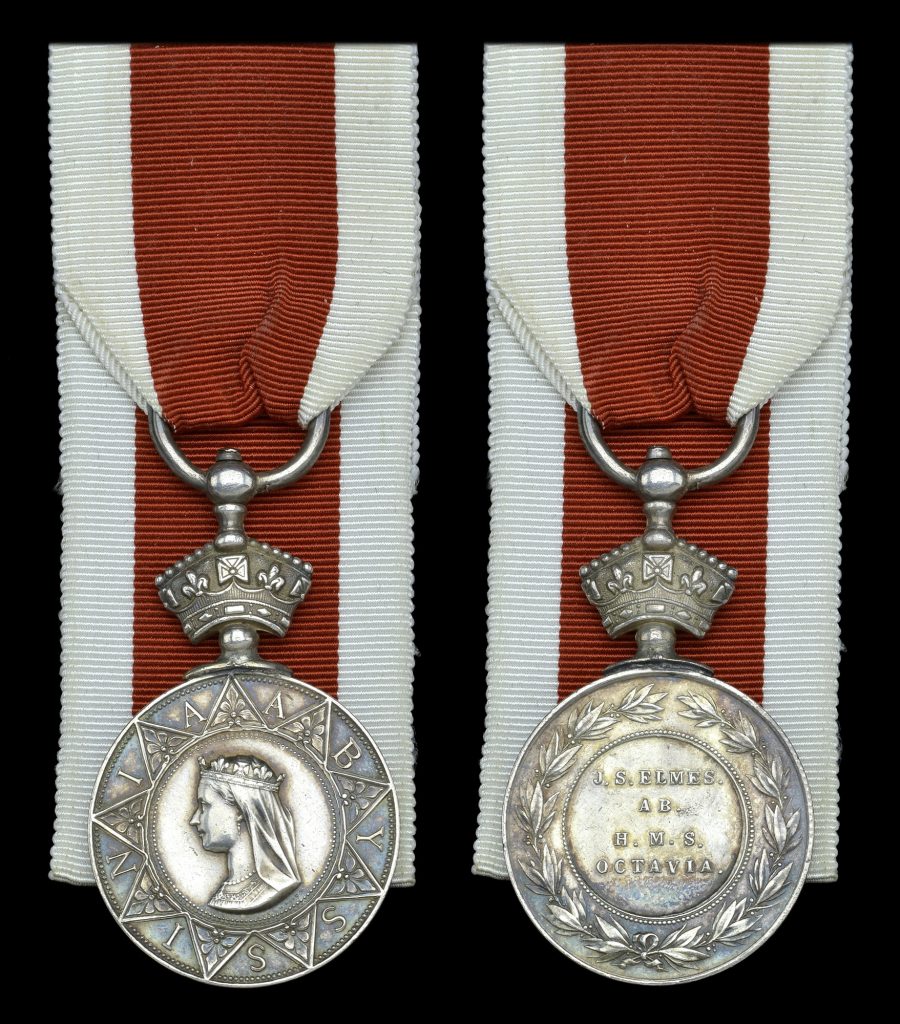 This attractive medal sanctioned in March 1869 is possibly the most unusual British medal of the Victorian Era, its suspender consisting of an imperial crown and ring was never used again for a campaign medal and the embossed naming of the recipient is reminiscent of the placement of the naming on the Anchor type Royal Navy Long Service and Good Conduct Medal.

In a recent discussion with fellow blogger Bill Pickering, I learned that the naming styles to the RN can vary and although in the example shown left we see the naming set out in a strictly horizontal fashion, the naming is often seen laid out in a semi circular style an example of which, is pictured below.

ABYSSINIA is spelled out on the Obverse and each letter is separated by one of the points of an ornate 9 pointed star.

The method of suspension consisting of the mounting claw being attached to the disk by means of soldering proved to be fragile and it is very common to see medals described as having repaired suspenders.

In all, 14,000 medals were issued and of those, a little less than 2,000 were issued to the Navy. Medals were awarded to the crews of the nine ships that were on duty in the Red Sea and a mere fraction of the men were actually involved in the campaign. The number of medals issued to each ship is set out below and an additional 23 claims by Officers on Transport Service should be added to the total:

In an article by J.V. Webb appearing  in John Hayward’s medal list of February, 1969, the author suggests that this number can be further reduced by 214 medals not issued and further notation on the rolls that 25 men had deserted. This suggests that the actual number of medals issued to the Navy is closer to only 1,744. 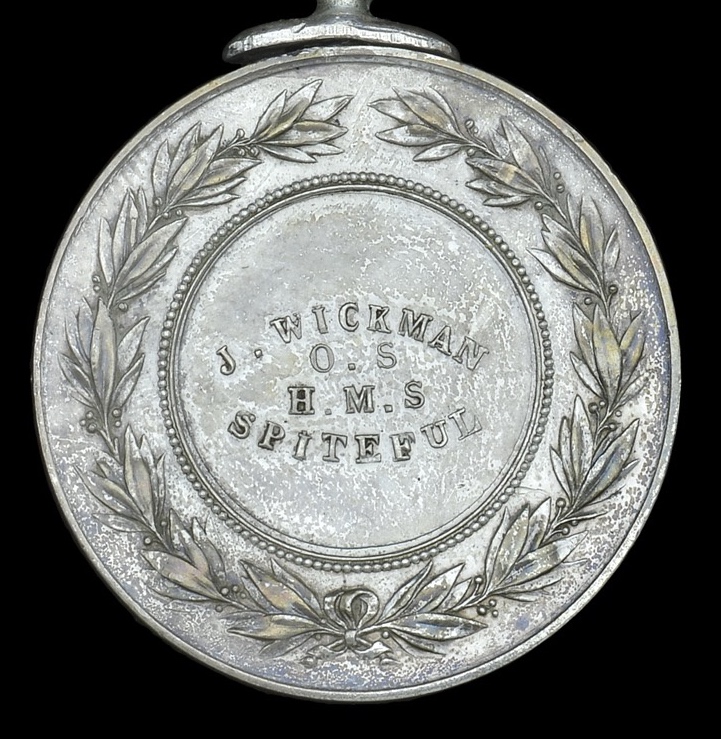 After acquiring a couple of Abyssinian medal and since the number issued to naval personnel was fairly modest, I decided to begin a “provenance list”. This list will be updated regularly and is located here

The campaign was essentially a rescue mission to return 53 European hostages held  prisoner by the King in Magdala more than 300 miles inland. Although two VCs were awarded (to the two men who were first to enter Magdala), the campaign itself was relatively bloodless with only 2 men Killed and another 27 wounded.(these statistics applying to the Army). With respects to medals to the Navy, all but 100 men remained at Annesley Bay below Massowah. Many Victorian medals have been described as “hard earned” but in this case perhaps this comment can only apply to about 5% of the Abyssinian medals.

The 100 men formed what was known as the Naval Rocket Brigade with the majority of the men coming from HMS Octavia. They formed part of the 1st Brigade and the march to Magdala was long and arduous over inhospitable terrain and supplies quickly ran out. Perhaps the most telling comment in a sailor’s note to his shipmates besides the comment as to the state of his feet and his boots, was that the Rum supply had run out by the end of March.

The use of rockets may have shortened this brief campaign since thy may have had a psychological impact on the King’s men and the ability to offer much resistance to the relievers. Utilization of the rockets used in the battle of Arogi plateau on April 10, 1868 had astonished King Theodore himself. After one rocket coming close to the King which he afterwards picked up, he stated that it was impossible to fight against people who used such things.

Magdala was taken within 3 days and the King shot himself (ironically with a revolver presented to him by Queen Victoria) thus ending a brief  episode in this rugged North African landscape, for which this rather uncommonly designed medal was awarded