The 1815 Reorganization of the Order of the Bath – Part 1

In my previous blog entitled Knight Companions of the Bath (K.B.), I described how the establishment of this order in 1725 helped create a whole new class of “political favors” available to the Crown, thus an expedient solution in staving off of an increased demand for limited Garter Knight vacancies.

After the cessation of hostilities with France in 1814, a significant shakeup of the Order the Bath was announced in the London Gazette on January 3rd, 1815. Thereafter, the Order of the Bath was to be divided into the three classes as we know it today. This was primarily done in response to the overwhelming demand to reward the vast numbers of Army and Navy Officers who distinguished themselves throughout the hostilities with France from 1793 to 1814.

Origins of the Extension of the Order

Notification of the creation of three new classes of the Order appeared in the London Gazette on January 3rd, 1815 with an excerpt of an official Warrant as follows (1):

Whereas his Royal Highness the Prince Regent, acting in the name and on the behalf of His Majesty, Sovereign of the Most Honourable Military Order of the Bath, is desirous of commemorating the auspicious termination of the long and arduous contests in which this empire has been engaged, and in an especial manner his gracious sense of the valour, perseverance, and devotion, manifested by the Officers of His Majesty’s Forces by Sea and Land: – And whereas his Royal Highness has thought it fit, by virtue of the Royal Prerogative, and of the powers reserved to the Sovereign in the statutes of the said Most Honourable Military Order of the Bath, to advance the splendor and extend the limits of the said Order, to the end that those Officers who have had the opportunities of signalizing themselves by eminent services during the late war, may share in the honours of the said Order, and that their names may be delivered down to remote posterity, accompanied by the marks of distinction which they have so nobly earned…….

This Warrant was very significant in that it had not been previously possible to reward lower level Army and Naval Officers through the few available British Orders of Knighthood. Russia (Order of St. George), Austria (Order of Maria Theresa) and France (The Legion of Honor) all had the ability to reward even junior officers for their bravery in action against an enemy. The Warrant would also effectively terminate the further issuance of British Naval Gold Medals, Army Gold Medals & Army Gold Crosses in any future conflict. Thus, the Order of the Bath would become the primary means to rewards those Army Officers who distinguished themselves in the Waterloo Campaign some six months later from June 16 -18, 1815.

Within the above Warrant, published on January 2nd, 1815, were further details regarding the three new classes of the Order. Regarding the Knights Grand Cross, those details are summarized as follows (1):

♦  His Royal Highness the Duke of Clarence

♦  His Royal Highness the Duke of Kent

♦  His Royal Highness the Duke of Cumberland

♦  His Royal Highness the Duke of Cambridge

♦  His Highness the Duke of Gloucester

Special consideration was also later given by His Royal Highness the Prince Regent to Senior Foreign Officers of Allied Nations as Honorary Members of the Bath. In an announcement in the London Gazette dated September 9, 1815, the following Senior Allied Officers received the G.C.B. to be invested by the Duke of Wellington (2):

♦  General His Highness the Prince Royal of Wirtemberg

It is not uncommon to see portraits or medal groups of Senior British Army and Naval Officers, veterans of the Napoleonic Wars, awarded with a Knights Grand Cross (G.C.B.) of the Order of the Bath. After all, that is the purpose for the extension of this order. There are (3) possible situations for this to have occurred:

One such Seringapatam & Peninsular War hero who benefited from the Order of the Bath reorganization was Lieutenant General Sir Archibald Campbell, G.C.B, shown in Figure 1. Sir Campbell assisted Marshal Beresford in the reorganization of the Peninsular Portuguese Army for which he was made a Knight Commander of the Order of the Tower and Sword as worn in Figure 1. He would also receive the Army Gold Cross for Albuhera, Vittoria, Pyrennes, Nivelle with bar Nive (also shown in Figure 1). For his distinguished services, he was nominated a Knight Commander of the Bath (K.C.B) on January 2, 1815 (3). As he rose up on the seniority list, he was finally nominated a G.C.B. on the 26th of December, 1826. Sir Campbell is an example of an officer under the (3rd) condition for the award of a G.C.B outlined above. 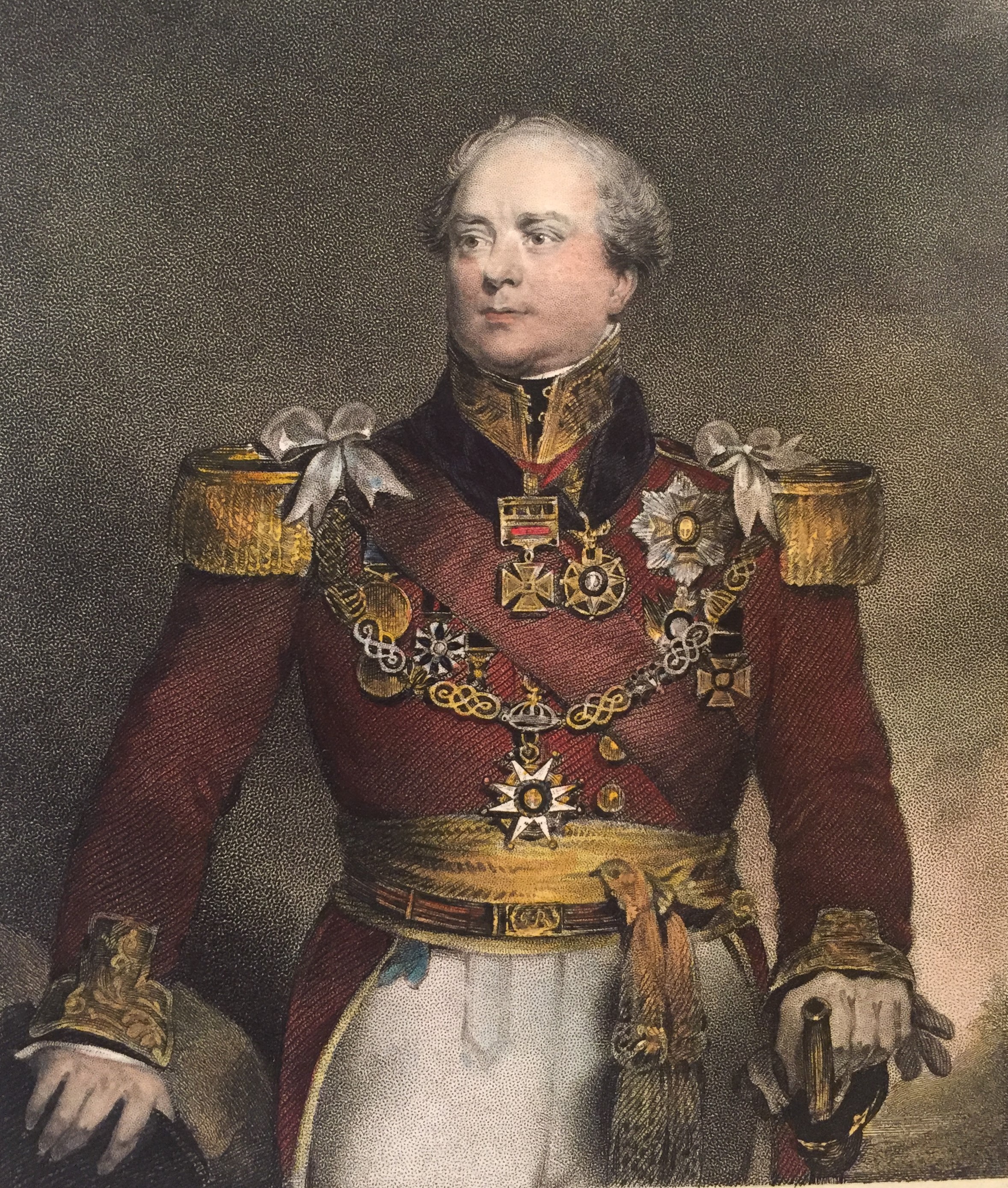 The design of the Knights Grand Cross (G.C.B.) Collar consisted of nine “Imperial Crowns of Gold” and eight “Rose & Thistles”, all connected by seventeen white enameled gold knots representing the the White Laces mentioned in the Ancient Ceremonials of Conferring Knighthood of the Bath. The White Lace is the equivalent of the Investment Garter in terms of old symbols of Knighthood. The reorganization of the Order of the Bath in 1815 made no changes to the G.C.B. Collar other than a new, smaller G.C.B. Collar Badge was to be suspended from one of the Imperial Crowns (see Figure 2) instead of from a white enameled gold knot as with the previous K.B. badges (4).

I do not have an illustration of a G.C.B. Collar Badge, but it is similar in design to the G.C.B. Sash Badge described below and shown in Figure 3, only smaller in size. James C. Risk give an example of the size differential in his book; a Collar Badge 2 7/8″ inch square and 3 oz. verses a Sash Badge at 3 3/4″ square and 3 oz. 19 dwts (4). This will vary by the jewelers who made them, but gives an idea of the size of scale differences.

Sash Badge Obverse –  The sash badge obverse in Figure 3 is a large white enameled and gold-tipped Maltese cross with British Lions between the arms of the cross. The center of the sash badge contains a thistle, shamrock and rose which symbolizes Scotland, Ireland and England. These are in turn radiating from a scepter and surrounded by three crowns. Surrounding this is a band with the motto “TRIA JUNCTA IN UNO”, which translates as “Three in One”. This is turn is surrounded by a green enameled laurel wreath. Underneath the laurel wreath is a blue enameled scroll with the inscription “ICH DIEN”, which translates as “I Serve”.

Sash Badge Reverse –  The reverse of the sash badge in Figure 3 is identical to the obverse with the exception that the British Lions between the arms of the Maltese Cross are facing towards the obverse as they are 3-dimensional representations. 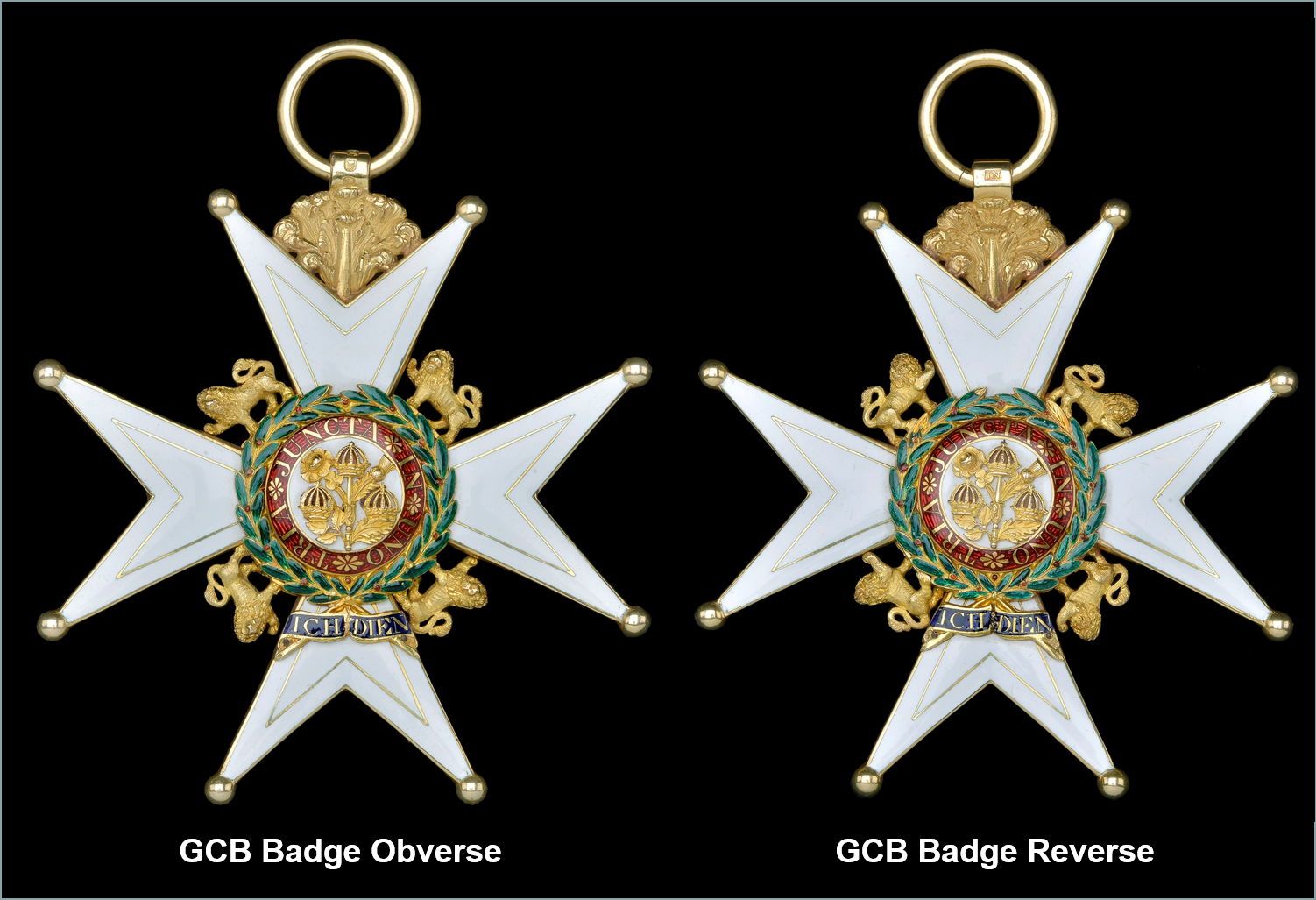 Sash Badge Size/Alloy – From the onset of the order, the sash badges were made of 22 Karat gold. The Lord Chamberlain commissioned some of the finest jewelers in England to manufacture these sash badges. The overall quality of goldsmiths in England at the time was quite high, but since there were multiple manufacturers, there are variations in the execution of the badge fabrication. In 1887, statutes were changed to make all classes of the order out of silver-gilt. This was motivated by cost savings. The particular sash badge example in Figure 5 measures approximately 3.54” square across the arms of the cross and 0.54” thick at the center.

Sash Badge Hallmarks –   During the 1815 time frame when the order was constituted, the London goldsmiths making these sash badges hallmarked their creations. Hallmarks typically show a code letter indicating the year of manufacture, a lion passant-guardant indicating gold content, the Sovereign’s head assay mark, and the maker’s initials. Hallmarks disappeared on the sash badge insignia upon the conversion to silver-gilt alloy.

Hallmarks on the upper suspension ring of the sash badge are shown in Figure 4 (obverse & reverse view). They include the Sovereign’s head (George III) for the London Mint, the lion passant-guardant (identifying this badge as 22 Karat) and the London hallmark letter for the year of manufacture, (e is for 1820). The reverse of this example in Figure 4 shows the maker’s mark of “IN”, which may be the jeweler Jonathan Neale. Early London hallmark letters for years of manufacture are: 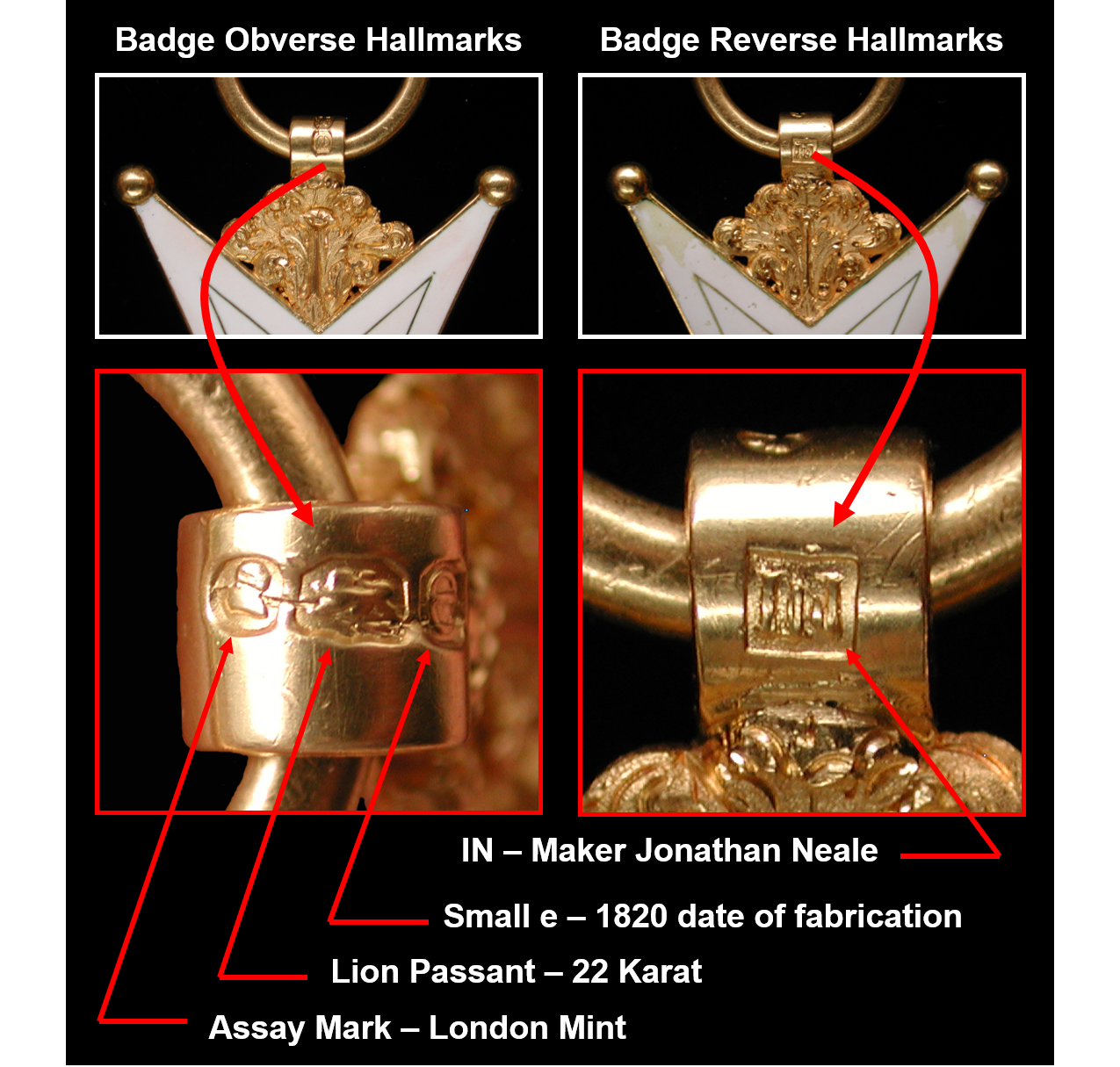 Sash Badge Suspension – The upper suspension ring attached to the top of the sash badge has a heavy plain gold ring passing through this ring. On earlier gold badges, this heavy plain gold ring is then in turn suspended from a split gold ring held in check by a knurled nut. This split gold ring/knurled nut combination is then sewn below the bow of the sash. In this way, the sash badge can be removed from the sash ribbon by unscrewing the nut and removing the badge. Later silver gilt badges were suspended from the sash with a simpler spring clip design.

Sash Badge Ribbon – The sash badge is suspended from a 4-inch crimson sash draped over the right shoulder and crossing the chest with the badge hanging from the left side.

Star Obverse – The obverse of the G.C.B. star is formed of silver rays on which is placed a gold Maltese Cross. Within the center of the cross is wreath of green enameled laurel leaves surrounding a red enameled band containing the motto “TRIA JUNCTA IN UNO” (Three in One). Inside the red enameled band are three Imperial Crowns. Underneath the laurel wreath is a blue enameled scroll with the inscription “ICH DIEN”, which translates as “I Serve”. Since these G.C.B. stars were privately made by jewelers, there are subtle variations in the size and execution of the design depending on the maker.

An early embroidered G.C.B. Investment Star made by Lewis, Gold Laceman, Embroiderer and Sword Cutler (circa 1820-1830) is shown in Figure 5. This 93mm diameter embroidered star is a bit unusual in that the Center of the star is not embroidered as with most stars of this type, but enamel and gold giving it a bit more flair than most. The maker’s paper roundel is shown on the right of Figure 5. The Lord Chamberlain supplied embroidered G.C.B Stars to the newly invested G.C.B. Knights. 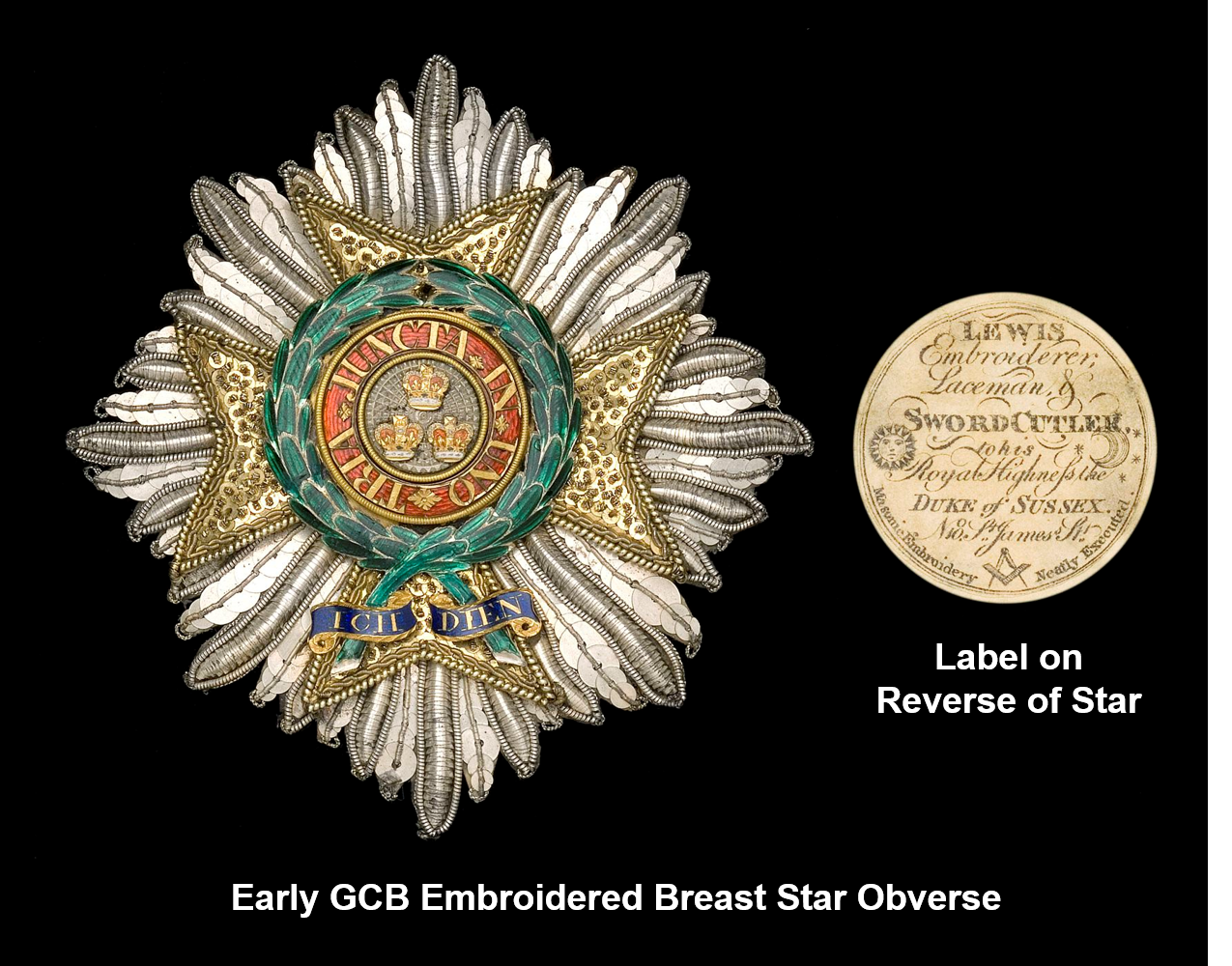 An early silver, gold and enamel G.C.B. Star (circa 1815) made by Rundell Bridge & Rundell is shown on the left side of Figure 6. This example at 116mm in diameter, is quite large and typical of those metal stars made right after the reorganization of the Order of the Bath in 1815. The smaller G.C.B. star (97mm), on the right of Figure 6, is also made by Rundell Bridge & Rundell, and typical of early stars made in the 1815-1820 time frame. We can assume that the smaller size stars became more popular to accommodate other stars and medals on the left chest of seniors officers. Since these G.C.B. stars were privately made by jewelers, there are subtle variations in the size and execution of the design depending on the maker. 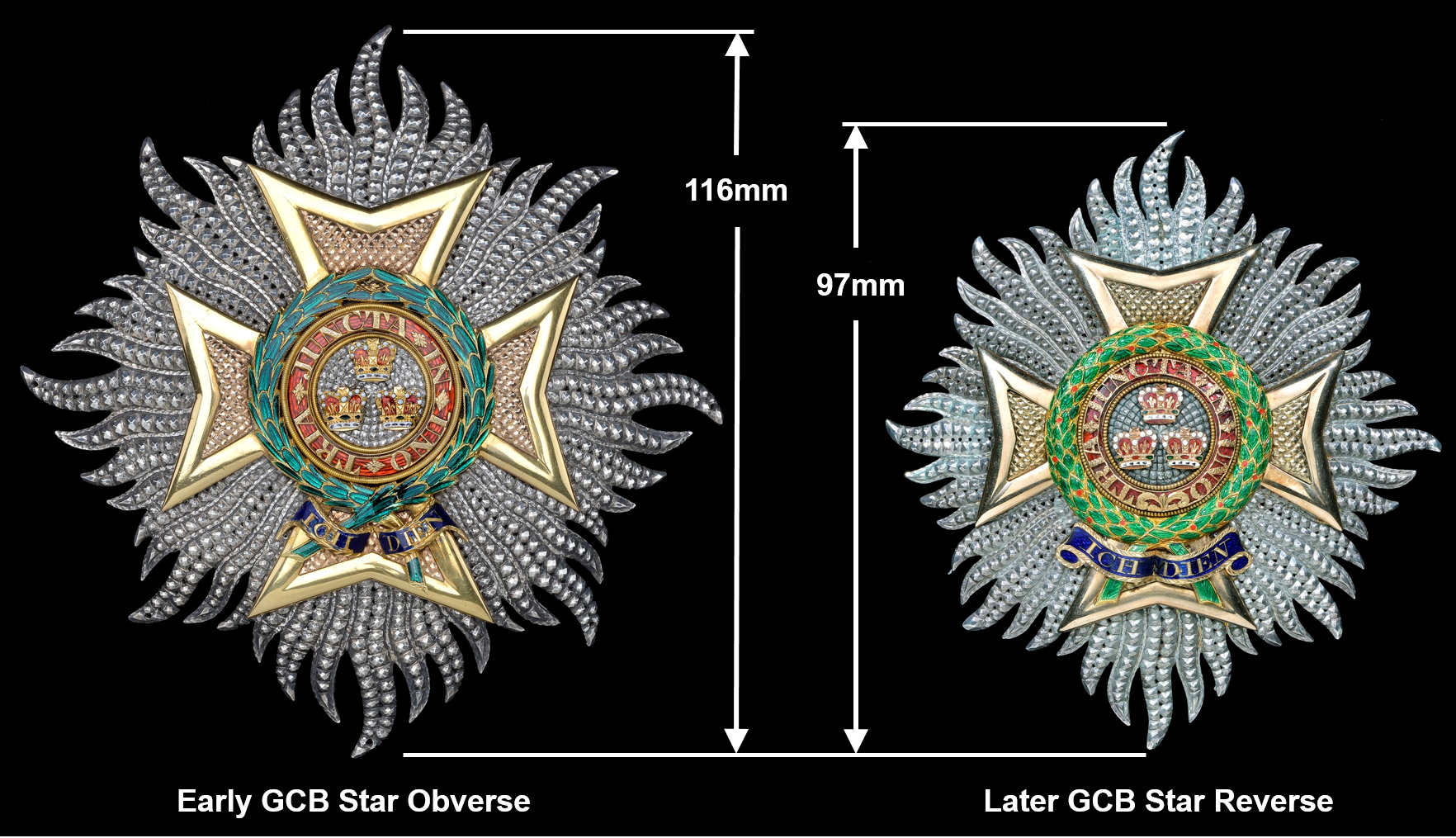 Star Reverse –  The reverse of the G.C.B. metal stars are very plain, typically with a round circular back plate in the center of the rays formed from silver. It is not unusual to have the maker’s name engraved on the reverse. Examples are also known where the name of the individual has been privately engraved on the reverse. G.C.B. stars were typically suspended from a hinged pin soldered to the back of the star. G.C.B. stars privately made in England were not typically hallmarked anywhere on the obverse or reverse.