Russian 50th Anniversary of Victory Medal to an American Nurse

In 1995, the Russian Federation decided to award medals to about 9,000 Americans who had supported the Russian war effort in World War II. Many of the recipients were merchant seamen and Maritime Service personnel who had brought in millions of tons of supplies, equipment and food in the Murmansk Run.  Others were involved in the Army Air Forces shuttle bombing missions in and out of Russia.

The medal came with a forwarding letter signed by Yuli M. Vorontsov, Ambassador of the Russian Federation to the United States, which said:

“On behalf of President Boris Yeltsin, the Russian Government and the entire Russian people, I am pleased to inform you that you have been awarded the Commemorative Medal “The 50th Anniversary of the Victory in the Great Patriotic War” (World War II).

This medal is awarded to you in recognition of your courage and personal contribution to the Allied support of Russia during her fight for freedom against Nazi Germany.  Please accept my heartfelt congratulations and wishes for your good health, well-being and every success.”

The medal was also accompanied by a small cardstock numbered award booklet bearing the name of the recipient and illustrating the medal. In this case, the recipient was Lieutenant Audrey C. Pratt, Army Nurse Corps. Lt Pratt served in Eastern Command, US Strategic Air Forces in Europe, being recommended for promotion to first lieutenant in August 1944.  She entered active duty in October 1942 and went overseas in August 1943. 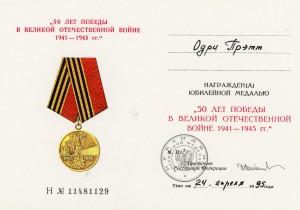 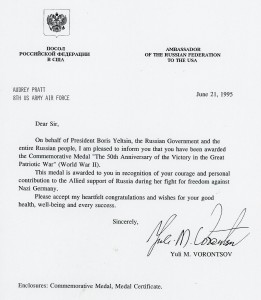 Here’s a photo of four US Army nurses in Russia, including Lt Audrey Pratt. 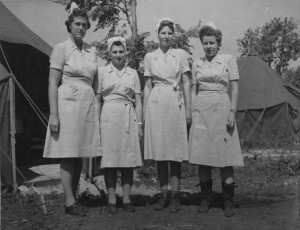