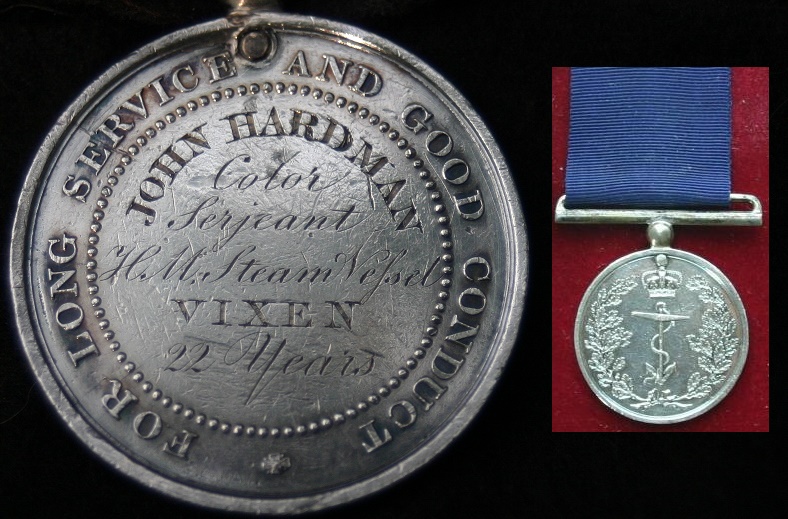 Since my last blogs, where I announced the Royal Navy WIDE suspender Long Service and Good Conduct medal roll and extant list,  I have now added all the Royal Marines from the Douglas Morris roll, along with some more known extant medals.  So please use this roll that will be a work in progress.

Douglas Morris also published a Royal Navy and Royal Marine Anchor roll, which is now included within this same roll. They are simply notated ANCHOR in the DIE TYPE. The Anchor LS&GC medal was awarded between 1830-1847 and Douglas-Morris concluded that 739 medals were minted. These generally had double ring suspenders but were often replaced with a variety of hand crafted suspenders as can be seen on Color Sergeant John Hardman’s medal. It was awarded with a solid blue ribbon.  Each medal was hand engraved with the man’s name engraved in a circular pattern at the top, his rank or rate went in the semi-circle created under the name, followed by the ship (generally H.M.S.), and finally the number of years served.

Below are two additional Anchor LS&GC medals showing the subtle differences in the engraving of HMS.  One has cross-hatches and the other doesn’t.  Is this indicative of two different engravers and their individual styles, or one engraver who was hurried that day?  It would appear whoever did engrave these kept within a certain set of rules and pattern although may have exhibited individual styles.  The first letters of Iohn and Bradley are larger than the rest, the Years appear to be of the same hand and yet the “2” is different. 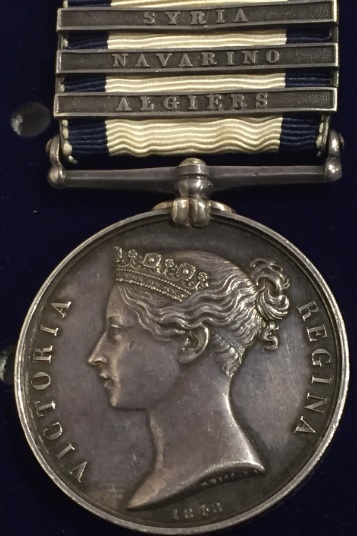 These medals represent three tremendous and historical careers.  John Bradley was one of three men to receive a Naval General Service medal with the three bars Algiers (1819), Navarino (1827), and Syria (1840) while serving aboard HMS Albion, HMS Asia, and HMS Pique respectively.  His Anchor and NGS medal were recently reunited.

John Remfry (aka Fore Topman Rensfry or Renfry) served under Captain Fitzroy aboard HMS Beagle when Charles Darwin made the now famous voyage of discovery.  He goes on to serve a total of 38 years and 192 days!  See his partial ADM29 below. 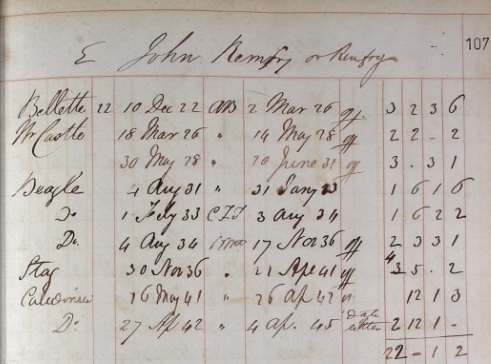 John Hardman served in the Carlist Wars (1835-1839) and was one of 123 Royal Marines to receive the Order of Maria Isabella Louisa.  He went on to serve with HMS Vixen during the 1842 campaign in China, and then proceeded on to Borneo, and was involved against Borneo Pirates and the attack on Matloodoo August 19th 1845.  A force of 530 seamen and marines in 24 boats attacked stockades and guns, which were blocked by a boom across the river.  The British lost 6 killed and 15 wounded, with HMS Vixen suffered three wounded seamen. 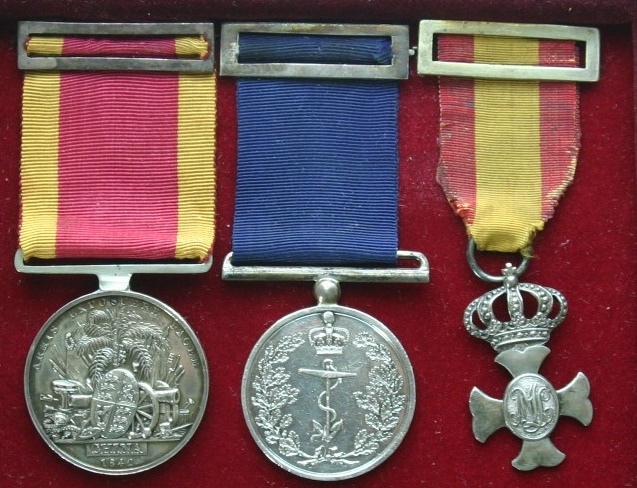 My next task is to introduce the NARROW suspender Victorian RN/RM LS&GC medal.  After the last WIDEs were made, the NARROW suspender was introduced in March 1875.  These continued to be engraved but “generally” without the years of service noted on the rim.  I plan to add to the ANCHOR/WIDE roll the few engraved NARROW with years, and the impressed NARROW with years, that are known to be extant. I will then move into all Victorian RN/RM LS&GC medals to 1902.  So that the OMSA roll and extant list will cover the period 1830-1902.  It is an exciting project which will never be concluded!