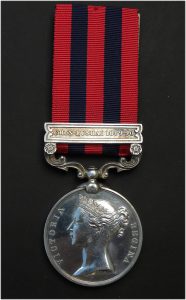 While it is easy to look at the medals and the campaigns in which they were earned, research into the man behind the medal can be some of the most fascinating parts about our hobby. But where to start? With a Victorian soldier, one of the first places to start should be the WO (War Office) 100 files . The WO 100 files, located in the British National Archives (and now searchable on Ancestry.com), are the surviving rolls of men issued medals by the British Army.  It should be noted that not all medal rolls have survived.  Some of these rolls are also in delicate condition and may even be missing pages.  What has survived is, for the most part, searchable and downloadable on the internet either through the UK National Archives or Ancestry.com.  As a general rule, only British soldiers are recorded in the WO 100 files; you can find information on a number of African soldiers in the King’s African Rifles and, even more rarely, soldiers in the Indian Army (but that is for another entry!) 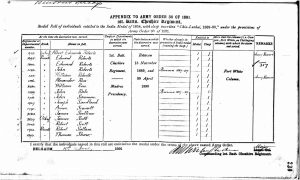 page of WO 100 roll for Chin-Lushai campaign

In the case of this medal, here is the entry for Sandland’s medal.  You will note (hover over the image and you will see a zoomed in aspect of the image)  that the roll lists the soldiers in the Cheshire Regiment alphabetically.  A few of the soldiers are also shown to have previously received the India Medal with the clasp Burma 1887-89; in their case they would only receive the Chin-Lushai clasp to their existing medal.  From the medal roll, we now know Sandland’s first name is Joseph and that he was not entitled to the previous clasp this medal.  I could go through each existing medal roll and look for entries of the Cheshire Regiment to see if he was awarded any other medals but an easier method exists.

When every soldier enlisted in the British Army, an attestation form was completed.  This form took some basic information that he gave when he enlisted.  This information is not always accurate as men enlisted for a variety of reasons, occasionally to escape their past.  The attestation papers were added to during the man’s career until he was discharged from the services.  These papers were retained after the soldier completed his service in case he re-enlisted and to prove he earned a pension; for that reason, these papers are referred to as the Royal Hospital Chelsea papers.  If the soldier died while on duty, these papers were destroyed.  The attestation papers are held in UK National Archives under the WO 97 series.  In addition to basic information on name and age, the papers tell where and when he enlisted, where he served and some medical information.  The papers can also have information on next of kin and, in some cases, tell a soldier’s alias. 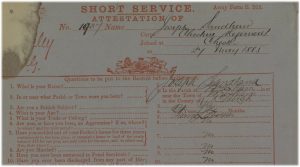 A section of Sandland’s attestation papers

Among the WO 97 files are the papers to Joseph Sandland who enlisted in the Cheshire Regiment on May 17, 1885. At the time of his enlistment, he was 21 years and 4 months old and his previous employment was as a farm laborer; remember this is what is given on the form and may not be accurate. In this case, he stated that he was born in Wrexham in Denbigh County (also known as Denbighshire), Wales.  The form also gives some rough information on next of kin and what medals he was awarded. In Sandland’s case, he was  only awarded the India Medal with clasp Chin-Lushai 1889-90. There is also a section that shows his deployments. In Sandland’s case, he initially spent 230 days in Britain, followed by a brief 27 days in the Mediterranean (most likely in transit), almost 2 years in Egypt and a further 5 years in India.

It can also be interesting to note the medal records of a soldier.  In Sandland’s case, India was not a healthy post.  Soon after the Chin-Lushai Expedition, he was admitted to the hospital with a case of “ague”.  At the time, Ague was a general term associated with high fevers and sweats; in modern terms he most likely suffered from malaria or some other tropical sickness. In his case, ague soon became associated with “melancholia”.  While it is impossible to really know what he suffered from it clearly affected his ability to perform his duties.  Perhaps his superiors felt he was shirking his duty or perhaps this was just the return of his malaria-like disease.  In any case, his inability to perform his duty led to his discharge from the Army.

Clearly, not every soldier was a shining example of courage and devotion to duty.  That is not to say that Sandland was a bad soldier, just that his career was unremarkable.  Even so, he left a mark in the files and a medal for a collector to research.  Researching even the mediocre soldiers can be intriguing and can show you how people lived in the Victorian era.