Date Issued:  The Red Cross Officer Decoration, Officer Cross was authorized on July 22, 1915 and was issued until 1918.

Classes:  The Red Cross decoration was originally issued in three classes with the Officer Class being added in 1915 to make the decoration a 4 class award. 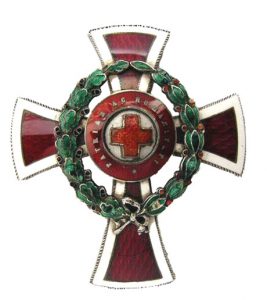 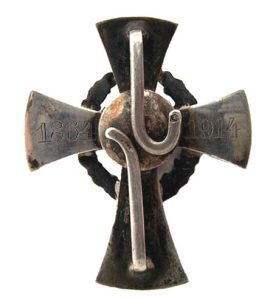 Red Cross Decoration, Officer Cross (Figure 2): A plain silver Latin cross with the dates 1864 and 1914 engraved on the transverse arms.  The vertical arms of the cross have a curved attachment clasp attached to each.  The reverse center is a 17 mm round silver button. The reveres of the attached wreath is plain silver.

Type of Material: Silver and enamel 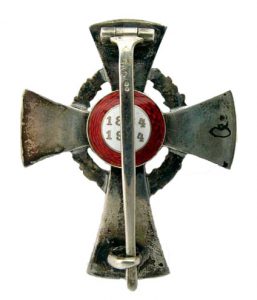 Number Issued: Unknown to the author

Case (Figure 4-5): Case for the officer cross is rectangular red simulated leather or red cloth covered on the top and sepia on the bottom. They are fitted inside with a plush simulated velvet interior which may be either black or white. The interior of the lid is white satin and often has the maker’s logo. They have an inscription on the top: (Patriae/ ac /Humanitati/ 1864-1914). Translation: Patriotism and humanity 1864-1914. Those for badges with the war decoration also have the letters K.D. in below the inscription. 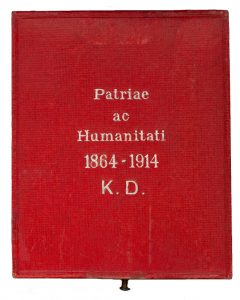 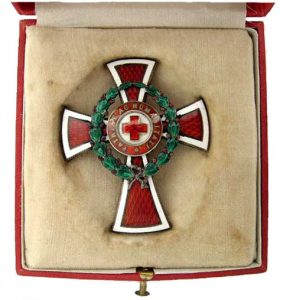 Ribbon: The Red Cross Decoration, Officer Cross was a pin back award and thus did not have a ribbon. However a small rectangular ribbon for this decoration which could be  issued with a small attachment to indicate the award of the Officer Cross  was introduced in October 27,1917. 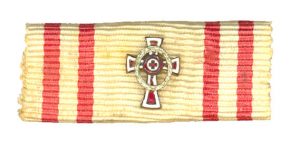 Some notable recipients of the Red Cross Decoration,  Officer Cross: 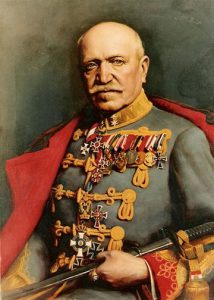 I hope you enjoyed this discussion. Soon I will describe the Red Cross Decoration, second class