By then, many of the old army veterans participating in these celebrated Napoleonic victories were deceased and the medal was only awarded to those still alive and had formally applied for the medal. So why did sanctioning the Military General Service Medal awarded for services in Napoleonic campaigns from Egypt (1801) to Toulouse (1814) have to wait until 1849? The back story on the Military General Service Medal that almost never was is quite fascinating.

The saga begins with the issuance of the Waterloo Medal in 1816, approximately one year after the great battle. In my previous blog on the Origins of the British Waterloo Medal, I noted that national sentiment ran high after the Battle of Waterloo and an overwhelming majority in the House of Commons voted that this medal be struck for presentation to all of those participating in the Waterloo Campaign. The Duke of Wellington was enthusiastic in his support and his recommendation was adopted that the same medal be given to both officers and soldiers alike.

It is therefore entirely understandable that less senior British Army Officers (and soldiers) that were not present at Waterloo, yet still gallantly served their country elsewhere would feel much resentment for not receiving similar medallic recognition for their services. Further fueling this resentment was the proactive practice of the Honorable East India Company (HEIC) rewarding their officers and soldiers with medals for many of the early Indian campaigns.

This controversy would continue to boil well into the 1840’s. A petition was presented in the House of Lords on July 21st, 1845 by the 5th Duke of Richmond on behalf of the veteran officers of the Peninsular War for consideration of a decoration for their war services. Strangely enough, the Duke of Wellington (Figure 1) would be a vocal opponent to sanctioning such a decoration, taking the position that having awarded the principal Senior British Army Officers with Army Gold Medals/Crosses and brevets, it was unnecessary to recognize the services of the remainder (1). 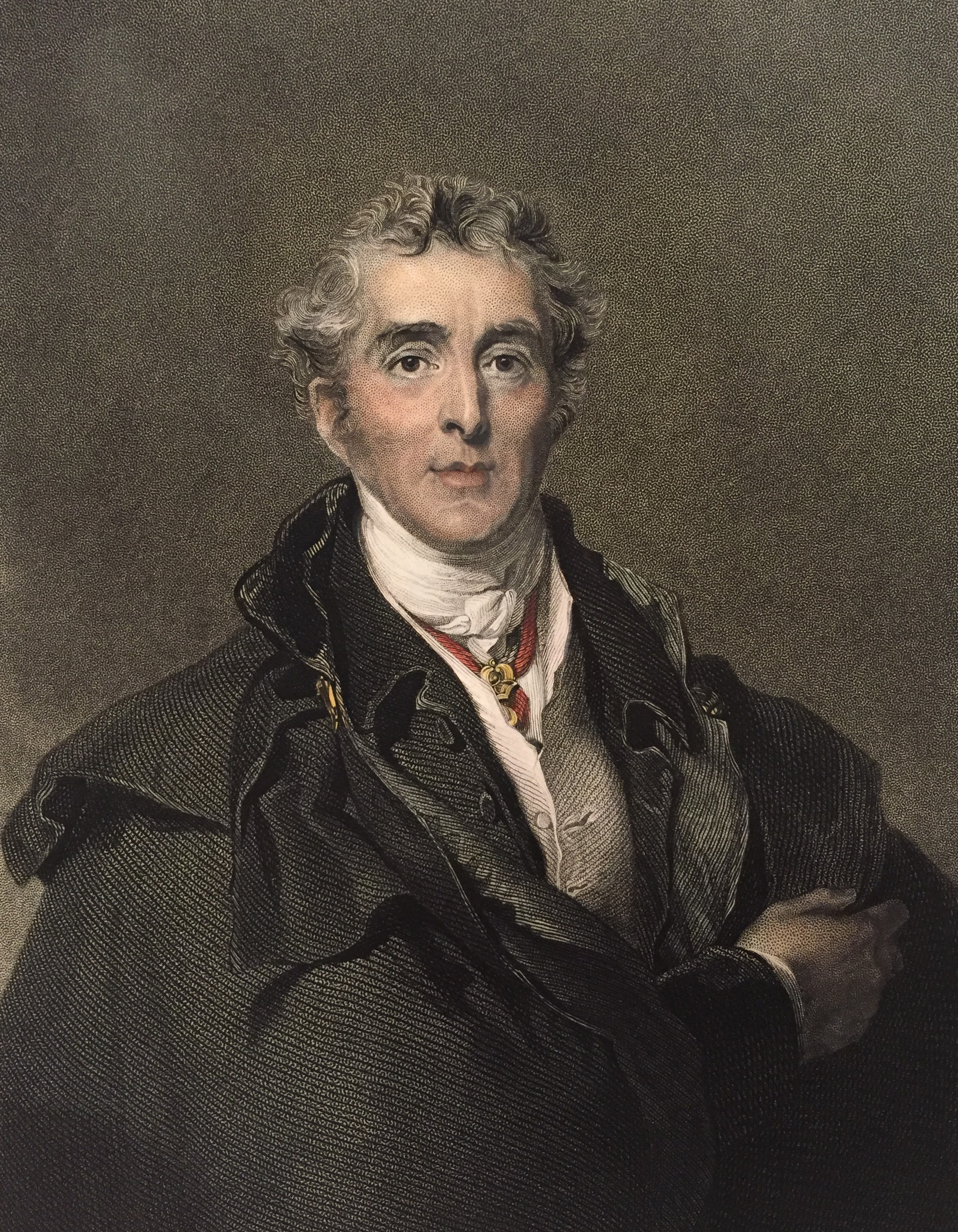 Figure 1 – The Duke of Wellington, an opponent of issuing the Military General Service Medal. Image from author’s archive.

Two years later, Colonel Sir De Lacy Evans, a Peninsular and Waterloo Veteran, would again raise the motion in the House of Commons that consideration be given by the Crown to grant commemorative medals to the survivors of Trafalgar and the Peninsular Wars. While the motion was withdrawn, the discussion had finally reached critical momentum (2).

In the end, it would be the offices of Queen Victoria (Figure 2) and her “expressed desire” that would overrule the conservative nature of the War Office in awarding a medal to honor the services of many of these veterans. Communication from Queen Victoria to the Duke of Wellington shows the conviction in her beliefs (3)

Queen Victoria to the Duke of Wellington.
Osborne, 25th November, 1846

The Queen has learned from various quarters that there still exists a great anxiety amongst the officers and men who served under the Duke of Wellington’s orders in the Peninsula to receive and wear a medal as a testimony that they assisted the Duke in his undertaking.”
The Queen not only thinks this wish very reasonable, considering that for recent exploits of infinitely inferior importance such distinctions have been granted by her, but she would feel personally a great satisfaction in being enabled publicly to mark in this way her sense of the great services the Duke of Wellington has rendered to his country, and to empower many a brave soldier to wear this token in remembrance of the Duke. 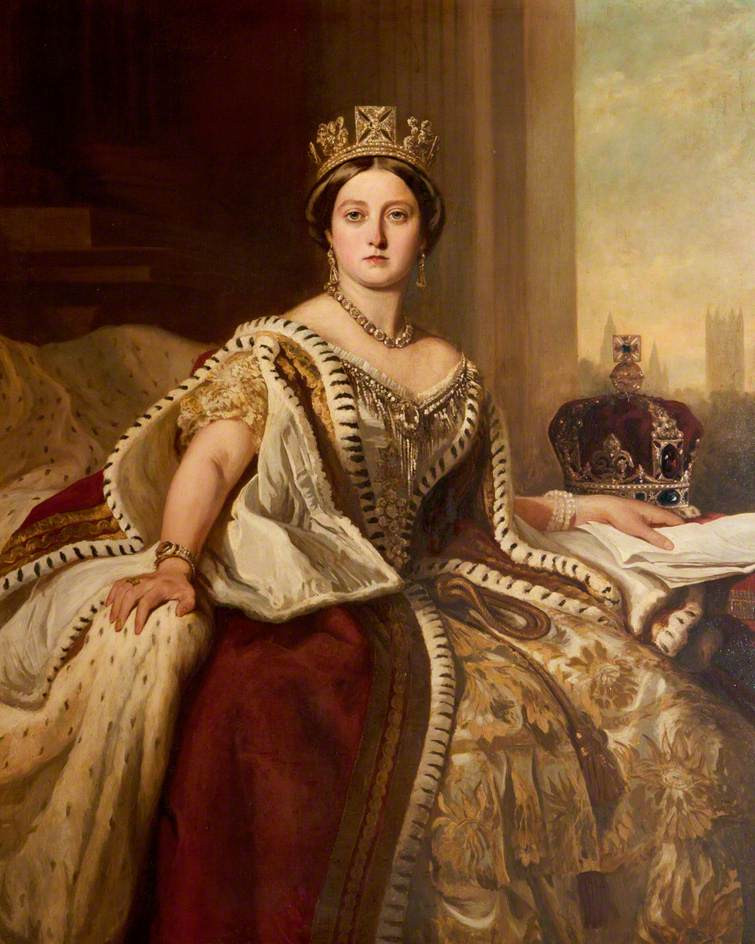 Within just six months, a General Order was issued awarding commemorative medals to both soldiers and sailors  to commemorate various actions between 1793 and 1814. Part of that general order is quoted here for background (1):

Her Majesty having been graciously pleased to command that a medal should be struck to record the services of her fleets and Armies during the wars commencing in 1793, and ending in 1814, and that one should be conferred upon every officer, non-commissioned officer and soldier of the army, who was present in any battle or siege, to commemorate which medals had been struck by command of Her Majesty’s Royal Predecessors, and had been distributed to the general or superior officers of the several armies and corps of troops engaged, in conformity with the regulations of the service at that time in force; general and other officers, non-commissioned officers and soldiers, who consider that they have claims to receive this mark of their Sovereign’s gracious recollection of their services, and of her desire to record the same, are each to apply to the Secretary of the Board of General Officers, Whitehall, London, and to send, in writing, to the same officer a statement of his claim, for what action, at what period of time, and the names of the persons, or the titles of the documents by which the claim can be proved……

An example of the issued Military General Service Medal is shown in Figure 3. The obverse is the diademed portrait of Queen Victoria that would adorn postage stamps, coinage of the realm and various campaign and service medals, including this Military General Service Medal. The reverse portrays the Duke of Wellington kneeing before Queen Victoria while she places a laurel wreath on his head, an oddity in that many of the clasps authorized for actions had no connection with Wellington’s Peninsular War campaigns. Attached to the suspender were clasps for authorized actions in which the individuals qualified. 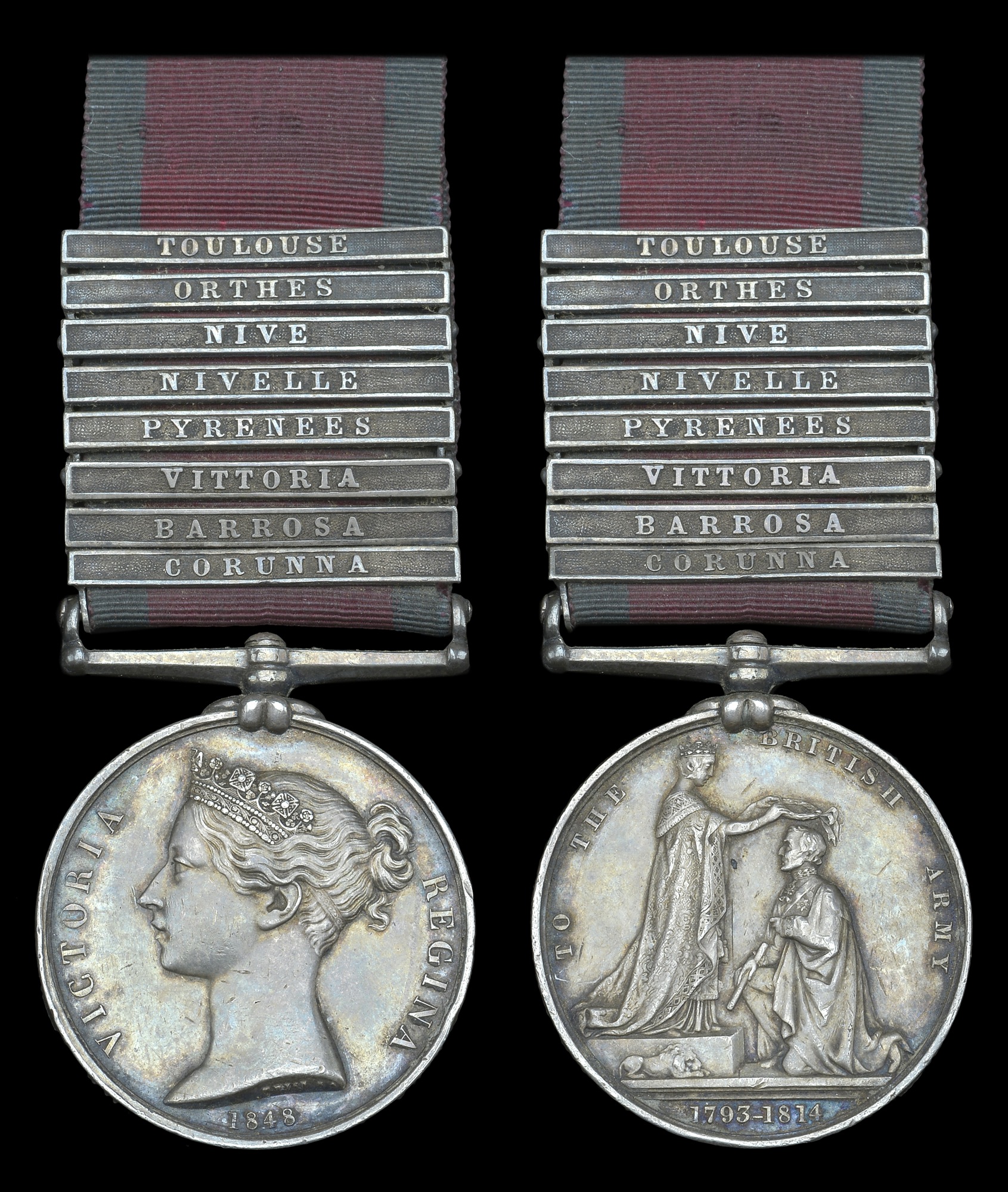 Clasps to the Military General Service Medal for actions outside of the Peninsular War with battle locations on a global map are shown in Figure 4. All these clasps (with the exception of the Egypt clasp) were authorized in the original General Orders where Army Gold Medals/Crosses were awarded for actions to British Army Field Officers and above. The Egypt clasp was later authorized in 1850 to celebrate this great British victory in 1801, largely again through the unrelenting efforts of the 5th Duke of Richmond. 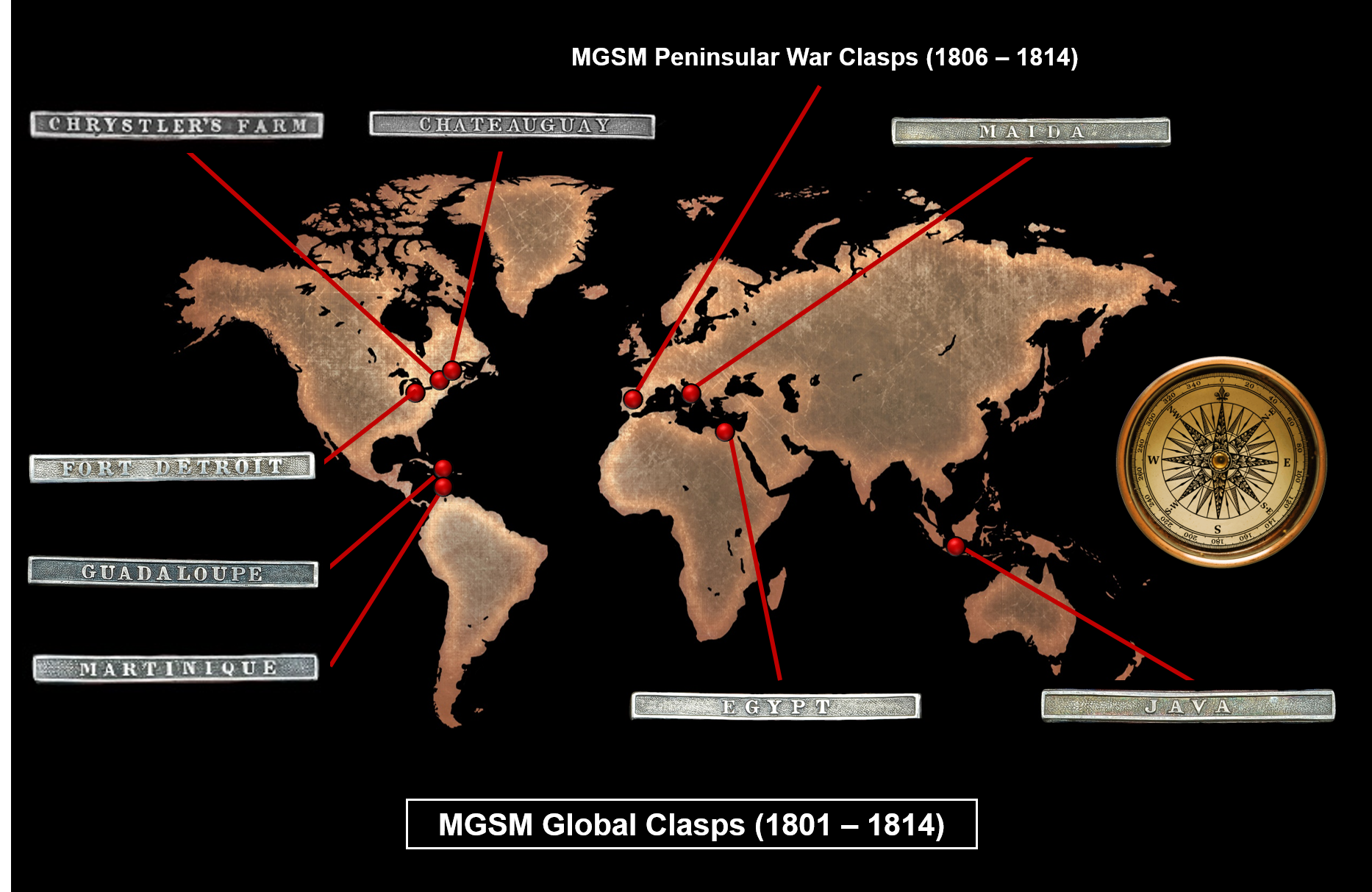 Clasps to the Military General Service Medal for Peninsular War actions with battle locations transposed on a map of Spain and Portugal are shown in Figure 5. The actions represented span eight years, from the Battle of Roleia on the 17th of August, 1808 to the Battle of Toulouse on the 10th of April, 1814. These clasps also correspond to actions where Army Gold Medals/Crosses were awarded. 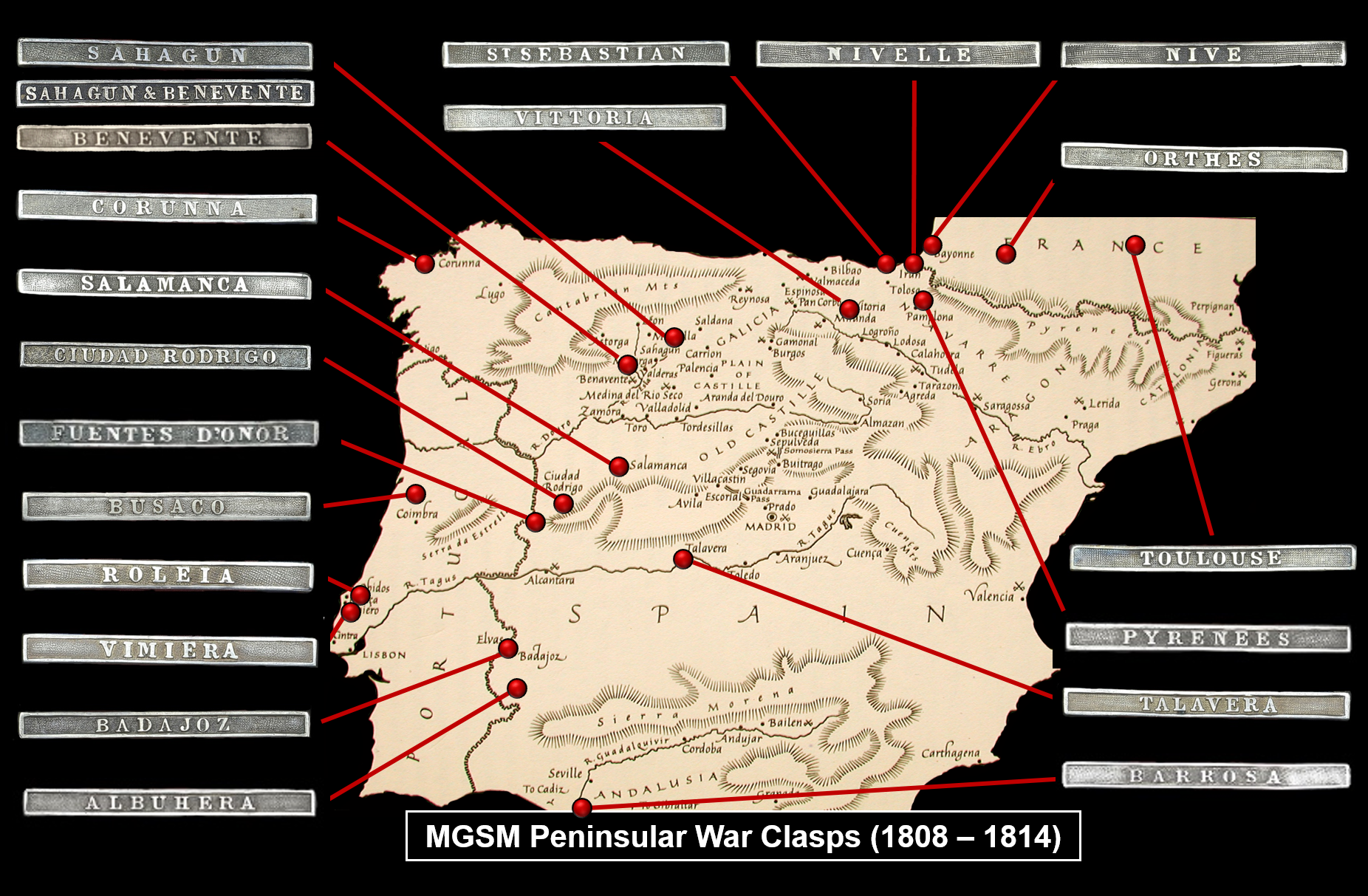 In closing, a final tribute to Charles Gordon-Lennox, the 5th Duke of Richmond (Figure 6) seems appropriate as it was largely his efforts that led to the very existence of the Military General Service Medal. Charles Gordon-Lennox (then known as the Earl of March) served on Wellington’s Staff in the Peninsular War. He showed early promise as an officer when he volunteered to be a part of the 52 Foot storming party at the Siege of Ciudad Rodrigo in 1812.  He requested to join the 1st Battalion, 52nd Foot in 1813 and commanded their lead company at the Battle of Orthes in 1814 where he was severely wounded. The musket ball from this wound was never extracted. During the Battle of Waterloo, Charles Gordon-Lennox was an Aide-de-Camp (ADC) to the Duke of Wellington and again showed his zeal in executing his duties.  He himself received the Military General Service Medal with eight clasps together with a Waterloo Medal for his services. 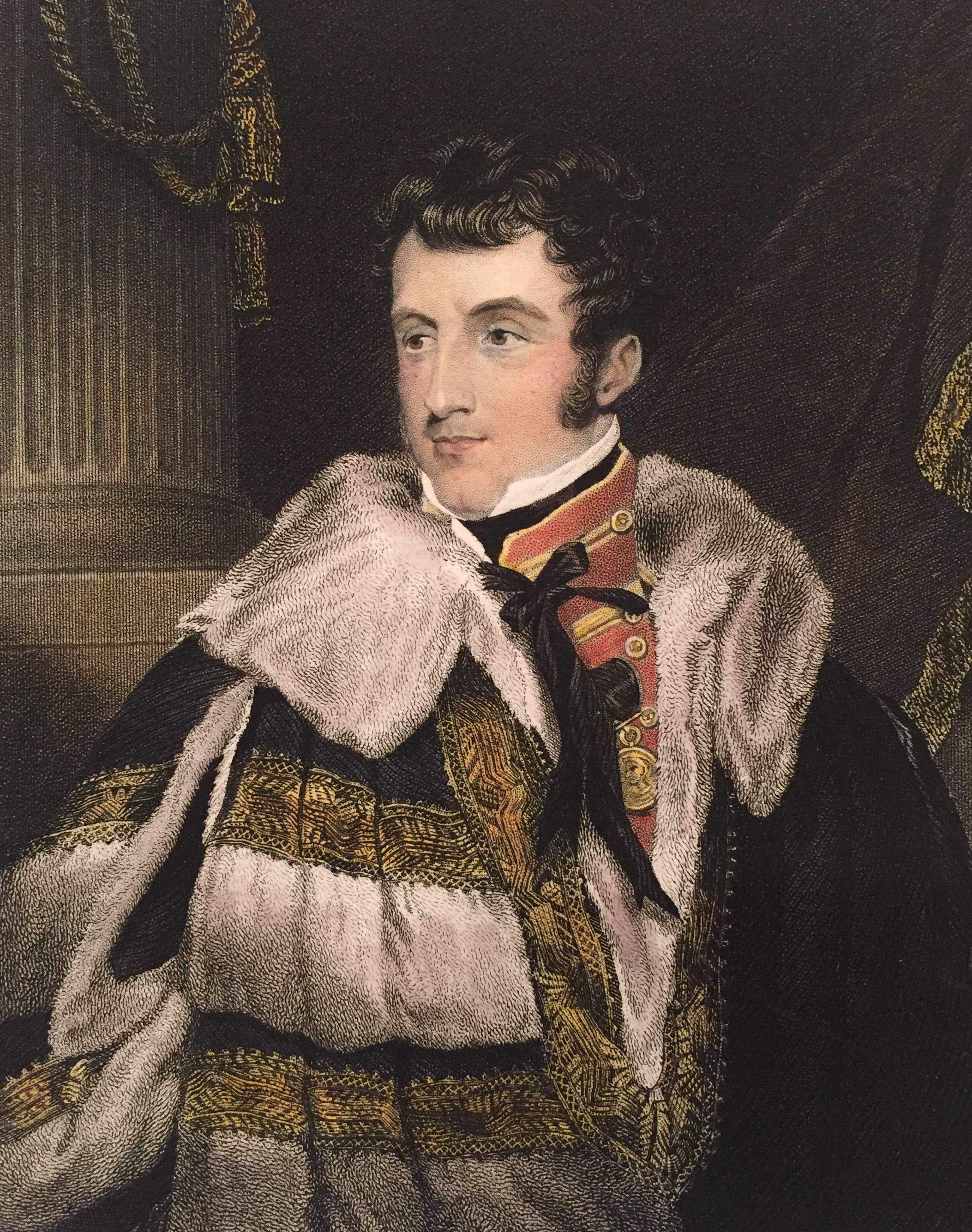 Fellow British Army Officers serving in the Peninsular War campaigns came together in tribute to the exertions of the 5th Duke of Richmond. Their testimonial was in the form of solid silver plate worth fifteen hundred guineas executed by the famous jewelers Messrs. Hunt & Roskell. This was presented to the Duke at a grand dinner at the Willis Rooms on the 21st of June, 1851. The inscription was as follows (5):

Presented on June 21st., 1851, 38th. Anniversary of the Battle of Vittoria, to His Grace the Duke of Richmond, Lennox, and Aubigny, K.G., by the Recipients of the War Medal, in grateful remembrance of his long and unwearied exertion in their behalf, as token of the Admiration, Respect, and Esteem, from his humbler brethren in Arms, who successfully aided in defending their Island H ome throughout long and sanguinary war, in which they gained series of resplendent victories, that led to the capture of Madrid, Paris, Washington, and finally to an honourable and lasting peace.