Origins of the British Waterloo Medal

Eleven days after the Duke of Wellington’s triumph at Waterloo, the British Parliament debated what steps should be taken to commemorate the great victory. Parliament had previously been opposed to granting any award to the common soldier. In this case, national sentiment ran high and an overwhelming majority in the House of Commons voted that a medal be struck for presentation to all of those participating in the Waterloo Campaign.

I would likewise beg leave to suggest to your Royal Highness the expediency of giving to the non-commissioned officers and soldiers engaged in the Battle of Waterloo a medal. I am convinced it would have the best effect in the army, and if the battle should settle our concerns, they will well deserve it.

In a further dispatch dated September 17, 1815 to Earl Bathurst, Secretary of State for the War Department, the Duke states:

I have long intended to write you about the medal for Waterloo. I recommend that we should all have the same medal, hung to the same ribbon as that now used with the medals.

In the London Gazette dated 23rd of April 1816, the following official notification was published (1):

The Prince Regent has been graciously pleased, in the name and on behalf of His Majesty, to command, that in commemoration of the brilliant and decisive victory of Waterloo, a medal should be conferred on every officer, non-commissioned officer, and soldier of the British Army, present upon that memorable occasion.
His Royal Highness has further been pleased to command, that the ribbon issued with the medal, shall never be worn but with the medal suspended to it.
By command of His Royal Highness the Prince Regent;
Frederick, Commander-in-Chief.

As a result, the Waterloo Medal was authorized by the British Government on April 23, 1816 to be given to all officers and men of the British Army (including the King’s German Legion) for participating in the battles of Quatre Bras and Waterloo from June 16 through June 18, 1815. Thus, the Waterloo Medal became the first award issued by the British Government to all ranks of soldiers present. This was a radical departure from the practice in England at the time of only rewarding officers with medallic recognition for service, thereafter establishing a trend that continues to this day.

William Wellesley, the Master of the Mint, was commanded to manufacture the Waterloo Medal and planned to strike approximately 40,000 medals in bronze to supply the demand. Work commenced almost immediately on rolling the copper, cutting the blanks and preparing the dies (2). The task for engraving the medal dies fell upon Thomas Wyon, Jr., who had just been appointed Chief Engraver to the British Royal Mint in 1815 at the remarkable age of 23. Thomas Wyon, Jr. was from the famous Wyon family of engravers that faithfully served the Royal Mint and gave us such beautiful coins and medals throughout the 1800’s.

Wyon’s proposed design for the reverse of the Waterloo Medal was a beautiful winged figure of Victory seated on a pedestal, holding a palm in her right hand and an olive branch in the other. The word “Waterloo” is encapsulated below Victory and above her the name of the commander, “Wellington.” Thomas Wyon’s design was modeled after an ancient Greek coin of Elis, circa 450 B.C., now in the collection of the British Museum (1).

An early rejected trial pattern of a bronze Waterloo Medal is shown in Figure 1. This particular trial striking also features the name *John Martin 6th Inniskilling Drag.* impressed on the rim in the later correct naming style. Noted medallic author George Tancred mentions another such trial striking named to “John Shaw, Mint” (2). Several other similar trial striking specimens are known to exist, two of which are in the British Museum. 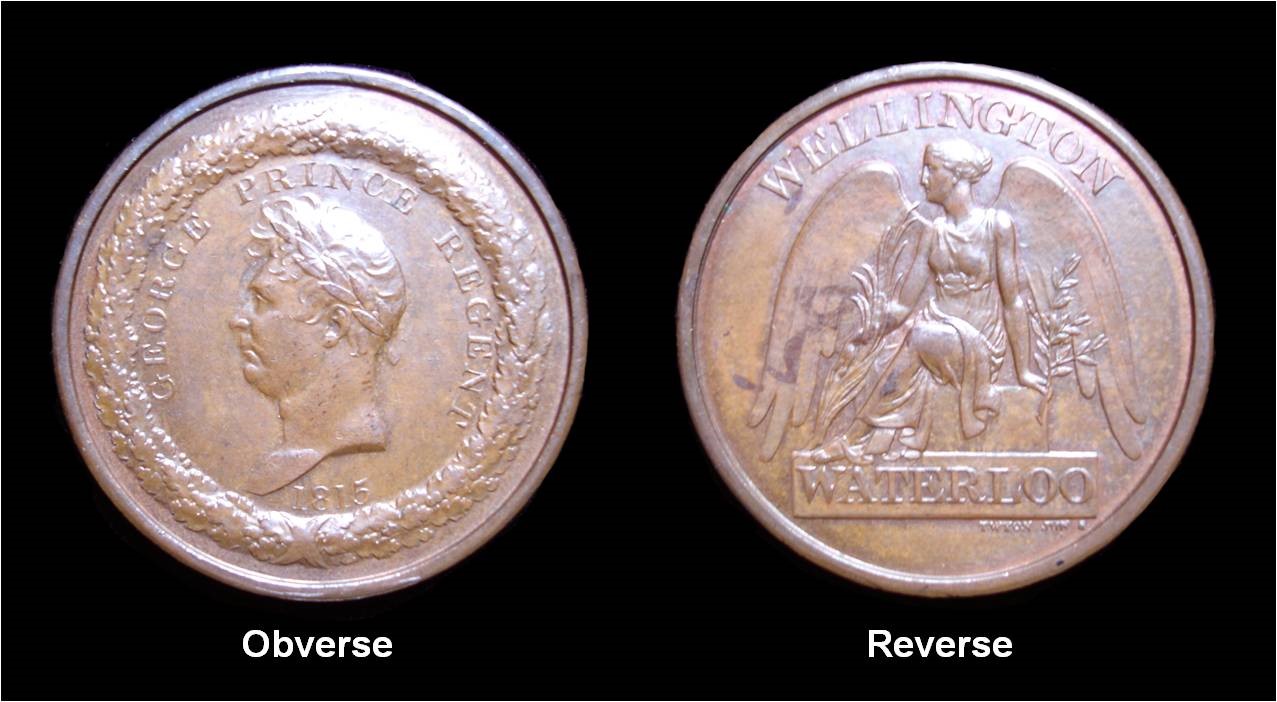 Another rejected larger size Waterloo Medal (41mm verses 36mm as issued) was struck in silver and was intended to be given to British Officers as shown in Figure 2. This obverse design differs from the as-issued Waterloo Medal in that it featured a draped bust of the Prince Regent. Tancred makes note of this particular prototype in saying it was rejected for being too large to wear (3). There is another identical specimen noted in the Ashmolean Museum and one in the Royal Collection (4). 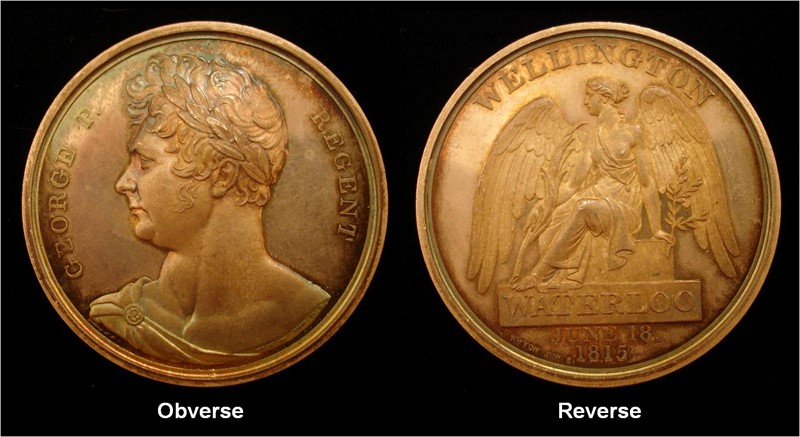 An unnamed trial striking of Wyon’s Waterloo Medal design in bronze is shown in Figure 3. This pattern would be the final accepted die configuration used for producing the required 40,000 medals. 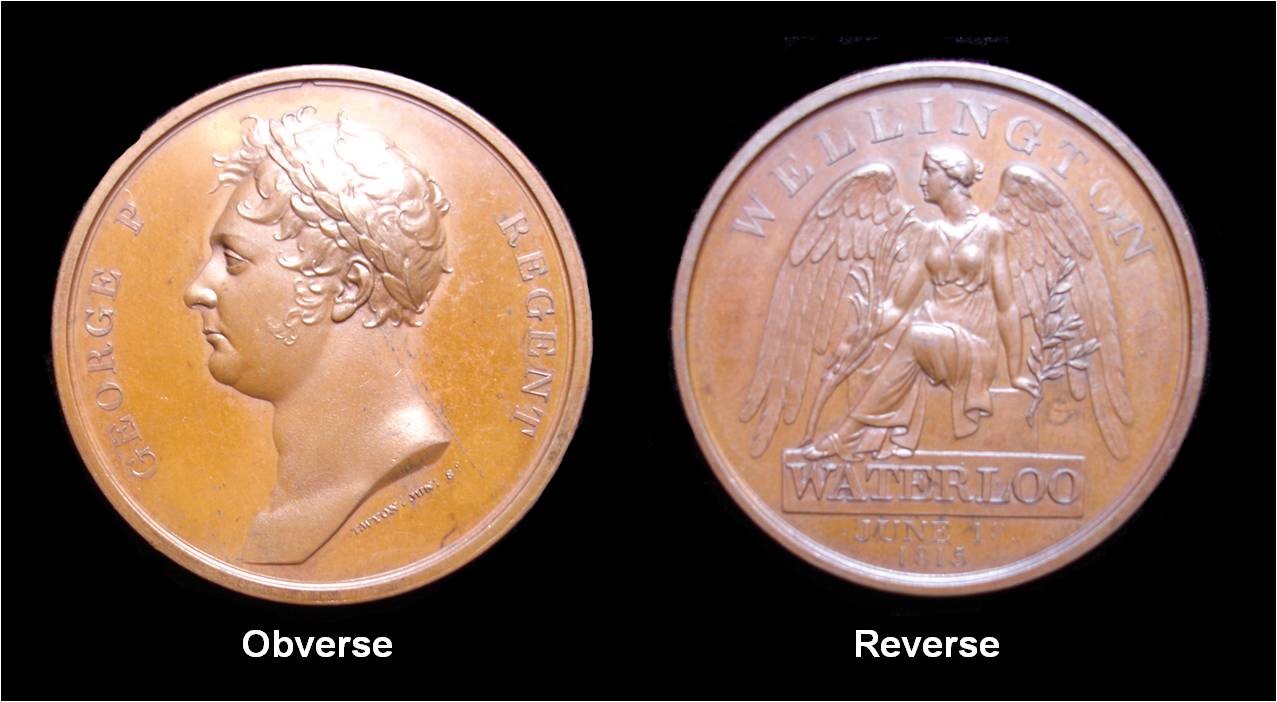 At the 11th hour, the Prince Regent signified his pleasure that the Waterloo Medal be struck from fine silver for distribution to all Officers and men present. Weight of the medal was intended to be approximately one ounce with a worth of about 6 shillings per medal (2).

An example of the final as-issued Waterloo Medal configuration in fine silver is shown in Figure 4. The name of the engraver, “T. WYON: JUN” appears on the obverse in small letters underneath the Prince Regent’s bust. On the reverse, “T. WYON” also appears next to the battle date of June 18, 1815. 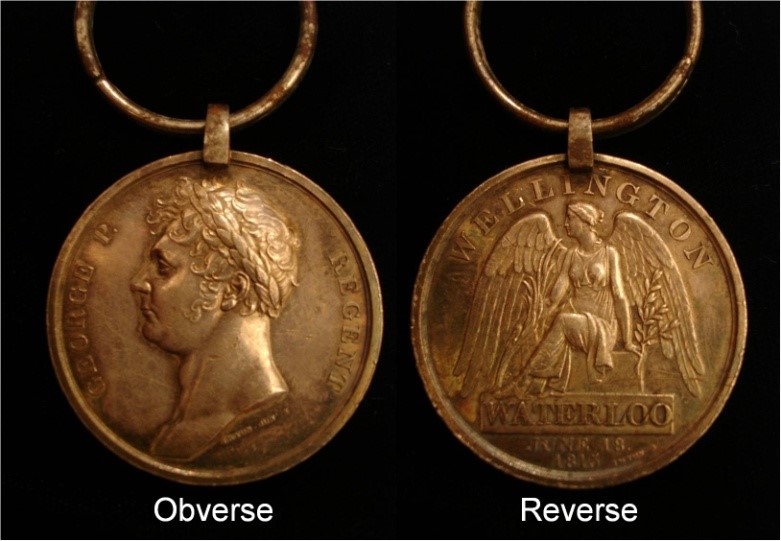 More to come on the origins of the Military General Service Medal 1793-1814.
-Chris C

1. Carter, Thomas, Medals of the British Army and How They Were Won, Groombridge & Sons, London, 1861