One of the things I enjoy most in conducting my research on the awards of the Austro-Hungarian Empire is discovering a small fragment of information that leads me on a wonderful intellectual adventure. In this blog I am going to provide an example of a fascinating fact that leads to some really interesting information. You may have noticed in my last blog regarding the awarding of the Military Merit Cross during WWI, that with one exception all of the issued awards incorporated the war decoration. Thus, of the sixteen types of Military Merit Crosses that were issued in WWI, fifteen were issued with war decoration and one without. When I first encountered this interesting fact I wondered why this was so. It was not hard to understand that the Military Merit Crosses issued during war time would have the war decoration which denotes war related service. But what circumstances could have led to the issuance of the one award without war decoration?

The breakthrough in answering this question came when I set out to write a brief biography of every Austro-Hungarian Feldmarschall and general officer, a project that I started 5 years ago and which is still ongoing, although I have collected the photos and synthesized biographies of 721 of these men to date. In compiling the biography of Feldmarschall-Leutnant Karl Adler von Strasser I discovered that he was the person who had received the Military Merit Cross second class ( see Figure 1) and who had been authorized to wear the Military Merit Cross second class with war decoration third class (see Figure 2). Both of these decorations were awarded only once. 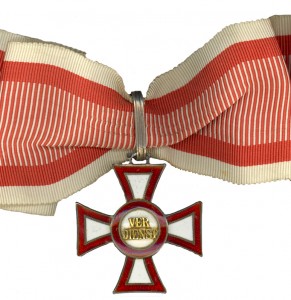 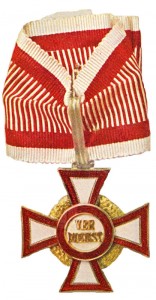 Karl Strasser (see Figure 3 below) was born on the 12th of May 1856 in Vienna. After attending the cadet institute at Eisenstadt he studied at the Theresia Military Academy from 1871 to 1875 from which he was commissioned into the 61st Infantry Regiment. As a component the 20th Infantry Division the 61st Infantry Regiment participated in the occupation of Bosnia in 1878. Strasser as a battalion adjutant took part in all the major engagements of his regiment. For his outstanding bravery at Stanic he was awarded the Military Merit cross with war decoration on October 20th 1878 (This was one of 393 such crosses awarded that year). Promoted to Oberleutnant on the 1st of November 1880 he was attached to the General Staff on the 1st of May 1883. Initially assigned to the 24th Infantry Brigade at Craców he was then transferred to the General Staff Department of the Headquarters of the 15th Corps in Sarajevo in October 1886. He was assigned to the Military Mapping Bureau in the Tyrol on the 1st of May 1888, having in the meantime been promoted to Hauptmann (1st class) in the General Staff. From May 1889 until October 1890 he was on field service with 49th Infantry Regiment as the commander of the 12th company and following that was assigned to further General Staff service with the 5th Corps Headquarters in Pressburg. He was then appointed the Chief of Staff of the 35th Infantry Division in 1892 in which post he was promoted to Major on the 1st of November of that year.

There followed service with 10th Infantry Regiment and promotion to Oberst in May 1898 while serving in the 80th Infantry Regiment, which he commanded, from April 1900 to July 1904. He was awarded the Order of the Iron Crown 3rd class and commanded the 24th Infantry Brigade as a Generalmajor from July 1904 until October 1908. After 30 years’ service Strasser was ennobled and took the predicate “Edler von” which was granted on the 29th of January 1907.  From October 1908 until April 1910 he held the post of Inspector of Fortresses in the Tyrol and was at the same time Fortress Commandant in Trient.  While in this position he was promoted to Feldmarschall-Leutnant on the 5th of November 1908 and was awarded the Knights Cross of the Order of Leopold on the 25th of February 1910. In April 1910 he assumed the command of the 18th Infantry Division but on the 8th of March 1911 he was relieved of his post on health grounds and on the 19th of May he was placed on half-pay status. 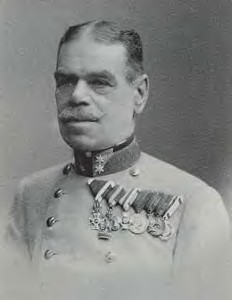 At the outbreak of World War I he volunteered for service and was placed in command of the Theresia Military Academy from the 1st of October 1914 until the 31st of December 1915. While serving in this capacity he was awarded the Officers’ Service Cross 2nd class on the first of September 1915 and by imperial decree of the 19th of December 1915 he was awarded the newly created Military Merit Cross 2nd class. This is particularly noteworthy as Karl Edler von Strasser was the sole recipient of this award without the war decoration. Furthermore Strasser would have been justified as the recipient of the military merit cross with war decoration from the campaign of 1878 to wear the Military Merit Cross second class with war decoration of the 3rd class.

Poor health forced him to leave his position at the Theresia Military Academy in 1915. He died on the 26th November 1918.

Since Strasser is not wearing either award in the picture I have of him I am not sure which award he chose to wear. I can say with confidence however that if he followed normal protocol he would have worn the second class award with war decoration of the lower class since this was the higher of the two awards and would have taken precedence. If anyone has a picture of him wearing the second class award in any form or knows where one can be accessed please let me know so we can further refine this interesting story.

On last point regarding the second class award, if you encounter an example of this award realize that there are only three possibilities. First that it is Strasser’s award. Highly unlikely as his award has to the best of my knowledge never appeared with any proper attribution in the market place. Second it is a copy. This often occurs when someone wishing to take advantage of collectors will either strike a copy of the original without war decoration or remove the war decoration from a genuine cross and sell it as being without war decoration. Lastly one may encounter a genuine cross that was never issued. In this case it would be the correct size and weight and by fully hallmarked. However even in this best of all scenarios it would not be an issued award. Lastly crosses represented as being a second class without war decoration have been sold in the last 5 years for an average price of $1,300 dollars. Is that a price you want to pay for a cross that is at best unissued and at worse a copy?

I hope you found this story and the remarks related to it interesting. As for me I find these kinds of intellectual side trips extremely interesting.

In concluding let me say that I have about 600 pictures of Austro-Hungarian Feldmarschalls and general officers and as noted before have compiled biographies of 721 of them including whenever possible a listing of the awards they have received so if you are looking for information on any specific General officer I may be able to help.