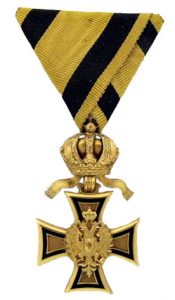 With this blog I am going to continue my discussion of the Austrian and Austro-Hungarian officer service crosses. Let me remind you that while we are discussing the officers crosses at this time that before I conclude I will provide information on the full range of service crosses issued from 1849 – 1918. In this bog I will commence this discussion of the officer service crosses issued from 1890-1918 with the Officer’s Military Service Decoration, first class (Militärdienstzeichen I Klasse für Offiziere ).

Reason Issued: To reward officers of the Austrian army and navy who had served fifty years of active service in a faithful and honorable manner.

Classes or Types: This cross was issued in one type.

Design: A clawed cross in the Leopold style with arms that widen toward the ends. The cross has a stylized wedge shaped eye at the top to which the crown suspension is attached. The crown suspension which featured long flowing banderols has a hole drilled through the orb at its top through which passes a ring for attaching the badge to the ribbon and round extension at the bottom for attaching the cross to the crown. 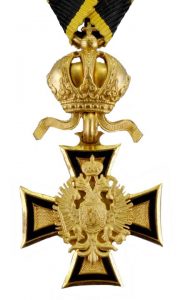 Obverse: A cross with a finely granulated surface and raised edges. The edges of the arms of the cross are tapered.  The arms of the cross have a 2 mm raised smooth edge.  The inner portion of the raised edge is of black enamel, which also follows the contour of the cross.  In the center of the cross is a gilt double-headed imperial eagle. Above the eagle heads is the imperial crown.  In the right talon is a sword and in the left an orb.  On the breast of the eagle is the Habsburg coat of arms.  Below the coat of arms is the chain of the Order of the Golden Fleece.  Above the cross is a 20 X 30 mm crown.  The crown is gilt. 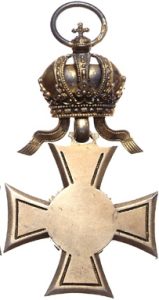 Hope you enjoyed this blog. Until next time when I will complete my description of the Officer’s Military Service Decoration, first class 1890-1918, I hope you find joy in our shared interest