NZ Medals to the RN Part I

I intend to write about each in a separate blog and although this first blog will focus on the medals for the first war, an overview of this rather unusual, numismatically speaking, medal is appropriate. What makes this interesting besides the unusual suspender and an interesting obverse, is the fact that there are multiple reverses, each with embossed dates (or in some cases undated) that refer to the dates of the recipient’s services. Very few medals to the senior service were awarded, the number issued spread over 9 ships, was less than 300 including 50 to the Royal Marines, but in spite of that, there are 5 different dated reverses. This offers opportunities for a collector looking for different examples of this rather scarce medal.

The focus of the blog is naval medals but in the case of the first war with one or two exceptions, any army medals had undated reverses.

The medal was granted to the Royal Navy and Royal Marines by Admiralty Order June 3, 1869. It was awarded to men who had been under fire and was not given to next of kin. The 20 year gap between the time under fire and the granting of the medal to survivors explains why so few of the medals were issued.

A summary of the numbers of medals issued together with the ships engaged, follows although it should be noted that some late issues had undated or wrong dated reverses owing to the fact that insufficient dated medals were struck:

Of interest to me, is the survival rates of Victorian campaign medals and this series of medals has a particularly high rate of survival. Provenance details for more than 45% of the medals is detailed here along with a complete roll of medals issued to the RN and RM. My sense of the reason for the high “survival” rate is based on the fact that it was a rather scarce medal to begin with and therefore more likely to escape the melting pot. Additionally, the fact that there were 5 dated reverses may have made the medal more collectible at a time when “type” collectors were less interested in the man behind the medal and instead focused on the numismatic variances of medals. 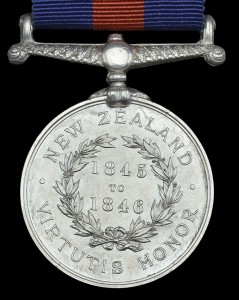 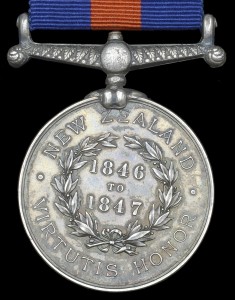 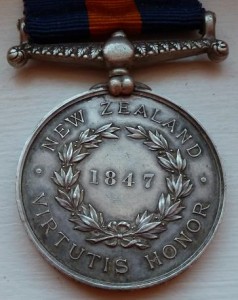 from the author’s collection

NZ Medal Naming Example. The naming style of the medals is IMPRESSED in serif capitals

Medals for the first war were awarded for a number of separate small localized conflicts all occurring on the North Island. The purchase of land from the Māori tribes by the New Zealand Company, missionaries and others and the resentment caused by failure to comprehend and to live up to the treaty of Waitangi in 1840, resulted in a build up of violent incidents. This led to the first major conflict being the sacking of Kororareka on March 11, 1845 which involved a force of 600 Māoris and left 20 Europeans dead and a similar number wounded.

Two weeks later, the British in an attempt to reestablish its authority over the region attacked and destroyed Pomares’s pā and the guerrilla war began.   The word pā can refer to any Māori village or defensive settlement, but usually refers to hill forts with palisades and defensive terraces.

Marianne Williams , one of the missionaries commented on the ingenuity of the construction of the war pā:

“It is quite astonishing how they seem to defy the British in their fortifications. They have double fences, ditches, and loop holes, their houses sunk underground; and as the great guns of the British are fired through their pa with so little loss to the rebels, it is supposed that they have large holes, in which they secure themselves. The fence round the pa is covered between every paling with loose bunches of flax, against which the bullets fall and drop; in the night they repair every hole made by the guns”

Some of them were very difficult to attack and often the Māori would defend them then make a tactical withdrawal to another pā to entrap the Europeans, thus making this a hard fought campaign over unfamiliar territory; sometimes through steep and dense bush land, with an enemy who used guerilla tactics to their advantage.

Not all of these conflicts were in the bush; various settlements were fortified by the military to guard against attack. As an example, at the Wanganui settlement in April 1847 an accidental shooting of a minor Wanganui Māori chief by Henry Crozier who was a naval cadet from HMS Calliope led to an attack on a settler family; when the perpetrators were captured and hanged, Māori besieged the town before mounting a frontal attack in July 1847.

A peace settlement was reached in early 1848. These early small conflicts occurred when the number of settlers was still small and the Māori dominated. In a future blog I will address the second war which began a dozen years later and by that time, the settlers had increased in number and they outnumbered the Māori and the conflicts were larger. 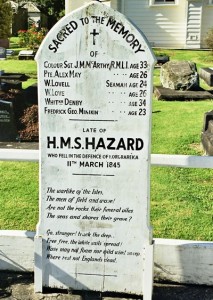