The recent sale at DNW in London of the John Goddard Collection of Important Naval Medals, was a fantastic event for any collector interested in medals of the Napoleonic period – of course, particularly for those interested in the British Naval General Service medal 1793-1840 (NGS). I was able to attend the sale, and it was a most entertaining event. Even in this age of internet bidding it was impressive to see the live auction – in the viewing room on the top floor of the DNW building, completely packed with potential bidders.

There were many extremely rare NGS medals being sold, several new to the market, most having not been seen since the mid 1980s, the majority selling at record breaking prices. In my view there has not been a public NGS sale of this quality and breath since the naval part of the Hamilton-Smith Collection sold in 1927. I’m told the 50 NGS medals and the unique ‘28 May 1794‘ Small Naval Gold Medal combined brought in ~£1.2M (hammer).

I will not attempt to review all the important lots here, the catalog is available at the DNW site for review. But I would like to draw attention to one small,  but to me interesting aspect that may have been missed by some naval collectors. Among many others, John Goddard had succeeded in acquairing two very important medals, both of which in the finest possible way exemplifies the success of the two most common types of vessles in the Royal Navy at the time. These are the namesake medals for the Cruizer (lot 16) and Cherokee (lot 42) classes of brig-sloops of the Royal Navy (RN). 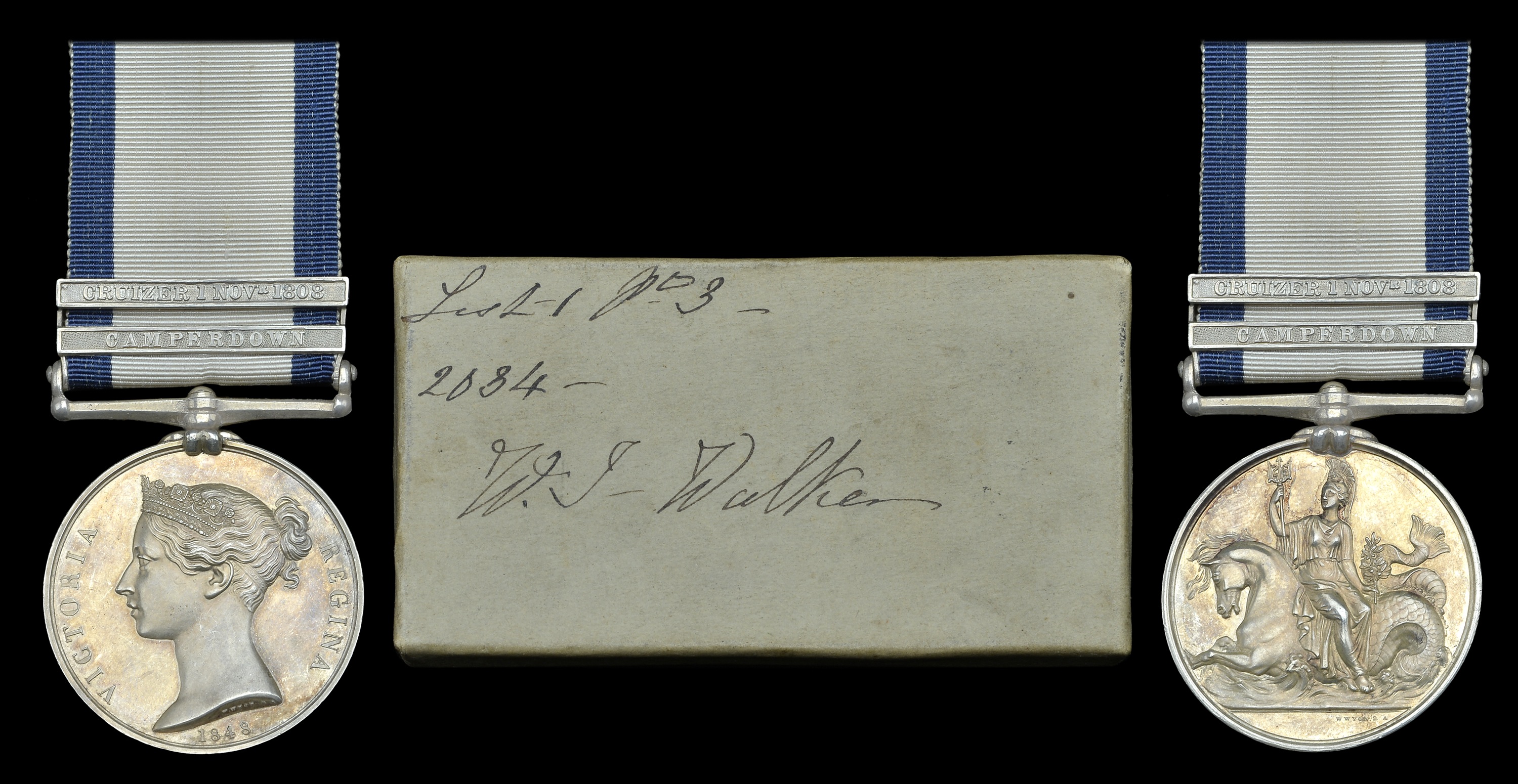 In this, my first post in the 1793-1815 Blog category, I will talk about the Cruizer-class brig-sloops and how they – and their crews, manifested themselves and were responsible for creating 12 distinct NGS clasps – named after each of 9 vessels in this class.

The Cruizer-class takes it name, as is customary, from the first ship in the class, the 18 gun brig-sloop, HMS Cruizer, built in 1796 by Stephen Teague of Ipswich. Eventually ~106 ships of this design would be built during the Napoleonic period. It was the most common class of ship in the Royal Navy during 1793-1815 wars, only the smaller Cherokee-class was built in total larger numbers, but this extended into the late 1820s (covered in a future blog post.) The brig-sloops of the Cruizer-class proved to be sleek and fast sailors, being narrow (~30 ft) compared to their length (~100 ft), and very seaworthy. However, they seem not have been overly loved by the ratings, the space below deck being especially cramped.

They had a nominal crew of 120-130, and was not a rated ship in the Royal Navy, being just below the 20 guns of the sixth-rated smallest frigates. This meant that typically only a mid level commissioned officer (Commander) would be in charge, – sometimes a senior Lieutenant, but never a post-Captain, – for this the ship was too small. In addition to the Captain, the complement would typically be: two Lieutenants, a few midshipmen, the Master, the Surgeon, the Purser, and the ships’s standing warrant officers, the Carpenter, the Gunner, and the Boatswain. Plus about 15-20 Royal Marines (RM), commanded by a Sergeant RM.  Adding the ratings brings the crew up in 120-130 count range.

The armament was typicall 16 × 32 pound carronades, and 2 × 6 pound guns as stern chasers. The 32 pound carronades gave the ship a very healty fire power at close range, comparable to the firepower of much bigger 32 gun frigates with 18 pounder guns. In this way, these smaller ships of the Cruizer-class brig-sloops gave the Royal Navy plenty of firepower delivered from a platform needing a much smaller crew. The Navy was in constant need of men and vessels, so this explains the popularity of these small efficient ships.

The fact that these ships were very frequently on the sharp end of enemy encounters is evident from the NGS clasp list. As  seen in the table above, 12 clasps are named after Cruizer-class vessels, indicating it was most likely the only RN ship present.  Many others of the Cruizer-class earned additional NGS clasps in company with other ships. A clear work-horse for the Royal Navy, one can be certain that all hands on-board these small brig-sloops were actively engaged during action. More details can be found on the Wikipedia links in the table above (or here). In Danish waters and the Baltic, between 1807-1810 alone – HMS Cruizer captured or assisted in the capture of more than 40 vessels. The NGS clasp was awarded for the promotion of Lieut. Thomas Wells, in command of HMS Cruizer when she engage a Danish flotilla in 1808 (click the officer’s name for more details). 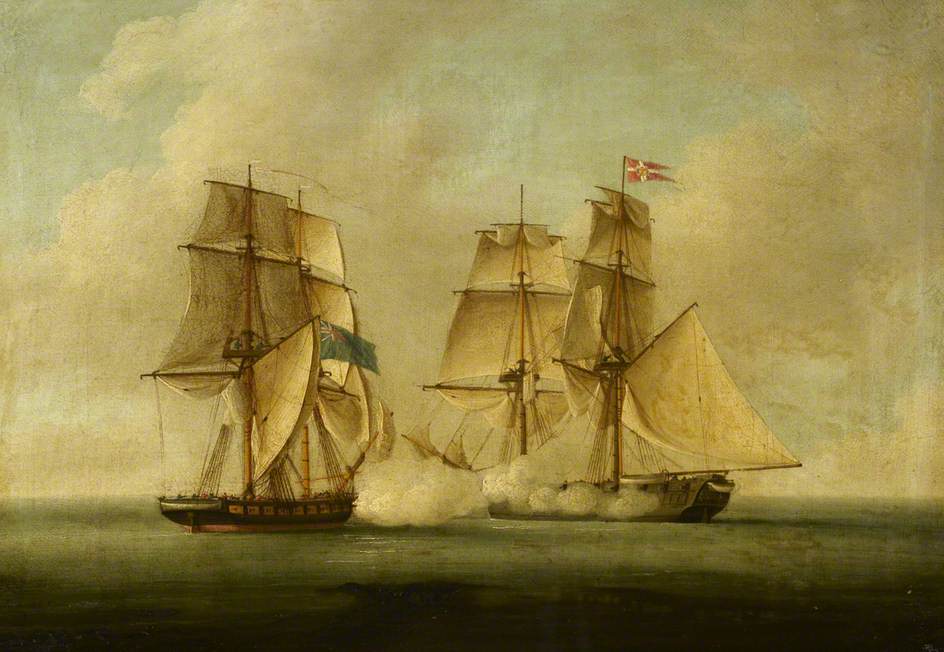 This painting  shows another Cruizer-class brig-sloop, HMS Sappho (18), engaging and capturing the Danish ship Admiral Juel (often incorrectly named Admiral Yawl in the English litterature) during an action in the North Sea March 1808, resulting in the promotion of Commander George Langford to post-Captain and thus ultimately the creation of the clasp Sappho 2 March 1808 to the NGS medal. Also for this clasp, only 4 medals were issued. Courtesy and (c) National Maritime Museum (Image: BHC0582) ; Supplied by The Public Catalogue Foundation.

During the wars, 8 Cruiser-Class vessels were lost to the enemy. HMS Frolic was taken by USS Wasp in October 1812, but was recaptured later the same day. In February 1813, USS Hornet sunk HMS Peacock , and in March 1815 she stung again by taking  HMS Penguin. However, that score had been partially evened out when HMS Pelican took USS Argus in August 1813 (see also table above).

John Goddard should be complimented for securing the namesake Cruizer-class medal, one of only four issued with this rare ‘Cruizer 8 March 1808‘ clasp. Most unusually, all have survived. One each is in the Royal Naval Museum and National Maritime Museum (NMM). And the fourth medal, to Lieut. John Allen, is known to be in a large private collection. The medal in the Goddard sale is named to W. J. Walker (an Able Seaman), is in EF/Mint condition and came with original ribbon and box of issue,  also relatively scarce for a medal this age, all combined making it a very visually attractive combination.

An interesting paper on an old Cruizer-class model in the NMM, is available here. Showing many great photos of the model’s fine details, well worth a study. 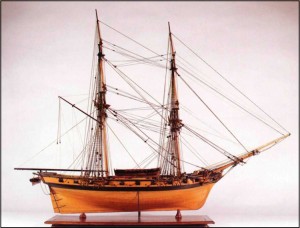 More to come about NGS medals to the Cherokee-class sloops.