Narrow Suspender LS&GC Medal with years on the edge 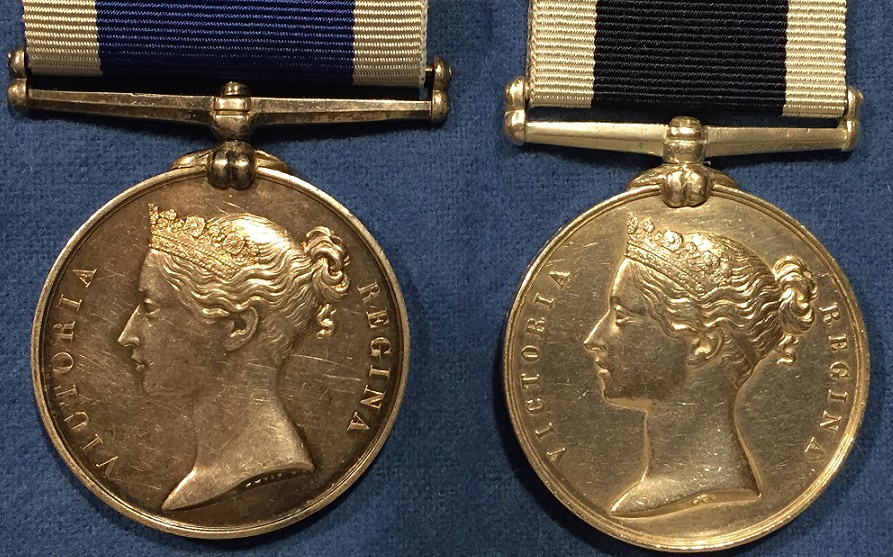 In early 1875 the Admiralty decided to discontinue the WIDE suspender LS & GC medal and introduce the Narrow suspender.  This took the suspender width from 1½ to 1¼ inches.  This doesn’t sound like much, but results in an significant visual reduction when compared side by side.  Simultaneous to this, the old “quota” system, which limited the number of medals issued, was abolished.  Now only the man’s record could prevent him from receiving a medal.  It was decided that men could qualify for the medal after only 10 years service (over the age of 18) as long as he had signed on for another 10 years.  These changes resulted in huge numbers of medals being awarded to men who were serving and had anywhere between 10 and 19 years of service.  In the two years from 1875 t0 1877 more medals were awarded than over the entire 28 year life of the WIDE suspender medal 1847-1875. Certainly the old salts who had to serve 20+ years of impeccable service to receive a medal may have indeed felt slighted, so it may be understandable that the WIDE suspender medal can be considered “majestic” when compared to its Narrow replacement!

The WIDE suspender medal was being hand engraved by Hunt & Roskill at the rate of maybe 20 per month and charged the Admiralty a shilling per medal. With the new rules, the demand for engraved medals was more likely 300 per month.  This may have put an undue burden on Hunt & Roskill, although they had previously handled thousands of Crimean medals 1855-1856, but in truth the Admiralty was looking to lower costs for the naming of the medals, and Hunt and Roskell were undercut by Medalist Mr. John Pinches of Haymarket, London who offered to machine impressed medals at half the price – sixpence each.  So in mid-March 1877 the last hand engraved medal was issued and all medals from that time forward were machine impressed.

But the story is a little more complex than that!  A unknown number of Narrow and Impressed medals continued the WIDE suspender medal’s practice of showing the number of pensionable years of service on the rim.  Douglas-Morris recorded 38 engraved medals with years (8 March 1875 – 14 March 1877) and 26 impressed medals with years (23 March 1877 – 17 October 1878).  These medals, and additional medals with years on the edge, have been added the the extant database here.  They are annotated by NARR YRS and IMP YRS in the die type column.  Aside from the obvious fact that all these medals have 20 or more years on the edge, it is unclear why some men got years and some did not.  There were plenty of 20 years and above men who got engraved or impressed medals without the years being shown on the edge.  It is the hope that as the database grows with additional sightings of medals with years on the edge, that this mystery can be resolved.  Below are two examples of impressed and engraved years.  Francis Skinner’s medal was awarded 3 May 1878 and Edward Ward’s medal was awarded July 1875.  It may be no coincidence that since medals to the Coast Guard were not authorized until 1874 that many of these medals were issued to the Coast Guard after the 10 year rule came about.