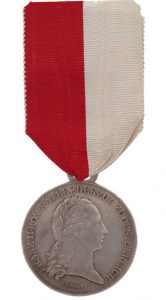 This decoration was issued by Emperor Franz II in 1797 to reward those persons who responded to the call to the leaders of Lower Austrian cities in 1797 to mobilize volunteer units to repel the French Invasion.  The medal was issued in four classes.

Reason Issued:  Issued by Emperor Franz II in 1797 to reward those persons who responded to Chancellor Count Saurau’s call to the leaders of Lower Austrian cities in 1797 to mobilize volunteer units to repel the French Invasion.  As a result of this appeal the cities of Lower Austria sent 17 battalions of infantry, 1 battalion of Jaegers, 2 Squadrons of cavalry and 450 other troops to the battlefield.

· The gold medal was awarded to Count Saurau, Duke of Wurttemberg who commanded the mobilized troops, some district chiefs and high level government officials

· Cast Iron examples of this medal are reputed to have been struck, however, no examples of the cast iron medals are known to exist

· The Lower Austrian contingent consisted of 17 battalions of infantry, 1 Jager battalion and 2 squadrons of cavalry, as well as the Standkorps of 450 persons.

Design:  A round medal with a raised rim and a large flat attached circular suspension eye at the top 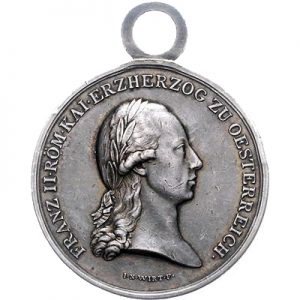 Obverse: The bust of Emperor Franz II, facing to the right, with long flowing hair and a laurel wreath on his head. Around the edge of the medal is an inscription which reads: FRANZ. II. ROM. KAI. ERZHERZOG. ZU. OESTERREICH. Translation: Franz II Roman Emperor, Archduke of Austria. Below the bust is inscribed the name of the medalist I.N. Wirt F. Wirt (Johann Nepomuk Wirth, Wurth),  (The F following the name stands for fabrikat ,(fabricated). 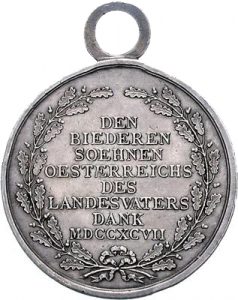 Reverse: An oak wreath tied at the bottom with a bow. Inside the wreath in eight lines is inscribed: DEN/ BIEDEREN/ SOEHNEN/ OESTERREICHS/ DES/ LANDESVATERS/ DANK/ MDCCXCVII. Translation: The nation’s founders give thanks to its loyal sons 1797.

Type of Material: Gold and Silver

Variations: Medals of blackened Steel that are 39-40 mm in diameter have been noted in the literature, however no known copies exist

Ribbon: There are two ribbons reported for this medal