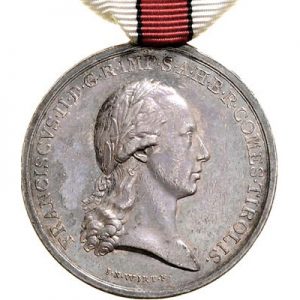 In this blog I am going to discuss the Military Merit Medal for the Tyrolean Mobilization (Militärverdienstmedaille für das Tiroler Aufgebot). This medal was issued in 1796 by the authority of Emperor Franz II to reward the Tyrolean’s who participated in the defense of the Tirol against the French during the war of the 1st coalition.

Reason Issued:  Issued by Emperor Franz II in 1796 to reward those Tyrolean’s who took up arms and defended the Tirol against the French when the emperor announced a mobilization on August 12, 1796

Interesting Facts: The larger silver medals were awarded to officers and the smaller to all other military personnel

Design:  A round medal with a raised rim and a large flat attached circular suspension eye at the top (see Figure 2 below) 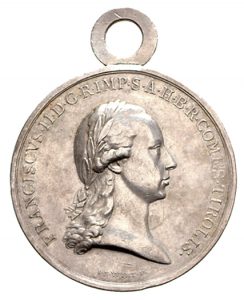 Obverse (Figure 2): The bust of Emperor Franz II, Facing to the viewers right, with long flowing hair and a laurel wreath on his head. Around the edge of the medal is an inscription which reads: FRANCISCVS. II. D. G. R. IMP. S. A.H.B.R.COMES.TIROLIS. Below the bust is inscribed the name of the medalist I.N.Wirt F. (The F is not part of the signature of the medalist but stands for Fabrikat: manufactured) 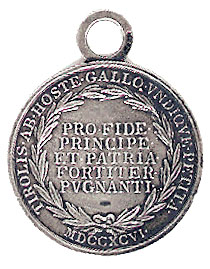 Reverse (Figure 3):  On a plain field is a laurel wreath tied at the bottom with a bow. Inside the wreath in five lines is inscribed: PRO. FIDE./ PRINCIPE./ ET. PATRIA/ FORTITER./ PVGNANTI. Translation: To the heroic fighter for faith prince and fatherland. Between the outer edge of the wreath and the edge of the medal is inscribed TIROLIS. AB. HOSTE. GALLO. VNDIQUE. PETITA. Translation, Tirol threatened on all sides by the French.   At the bottom of the medal is the date MDCCXCVI (1796)

I hope you have enjoyed reading this description. I look forward to sharing with you in the near future.
Rick