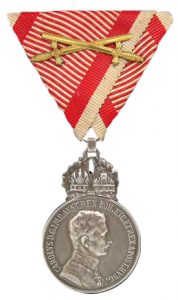 The Military Merit Medal (Militärverdienstmedaille), 1911-1917 is not at first glance a very important looking decoration. However to the Austrian officer corps and to the empire it was a decoration of substantial significance. This can be recognized when one considers that in the order of precedence of Austrian awards it preceded the Gold Bravery Medal. In fact this decoration was roughly the equivalent to the American Distinguished Service Medal in regard to the esteem with which its recipients were held within the empire. What follows is part 1 of the discussion of this significant award in which I will cover the medal numismatics including date of issue, reason for the award of this decoration, classes and types, interesting facts, hallmarks, design weight, size, type of material and variations.

Reason Issued:  To recognize extraordinary service in time of war by officers and military officials of a rank equivalent to an officer and after April 28, 1917 by civilians and civil servants who’s service had aided in the war effort..

Classes or Types:  This decoration was issued in two classes and two types.

Design: A round medal with a raised rim and attached crowns at the top with a loop for attaching the medal to the suspension ring at the top of the crowns 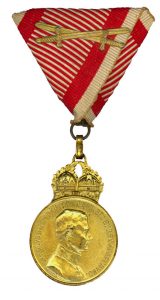 Obverse: A bust of King Karl in high relief facing right in a Field Marshals uniform and wearing the Order of the Golden Fleece and a grand cross ribbon.  Below his shoulder is the name of the maker, KAUTSCH (Heinrich Kautsch).  Around the bust is inscribed: CAROLVS. D. G. IMP. AVST. REX. BOH. ETC. ET. REX. APOST. HVNG.  The attached crowns represent the Austrian imperial crown on the viewers left and the Hungarian king’s crown on the right. A wreath composed of laurel on the right and oak on the left which is tied at the bottom with a ribbon is placed behind the crowns.  The crowns are struck with the medal. 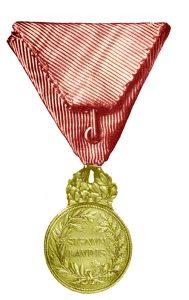 Reverse: Within a wreath of laurel on the left and oak on the right, which is tied at the bottom with a bow, is inscribed, SIGNVM LAVDIS (A token of esteem).  The reverse of the crown is completely covered by the wreath.

Size:  The decoration without crown is 31 mm in diameter.  The crown is 15 mm high and 18 mm wide. Thus the overall height of the medal is 46 mm.

Hope you enjoyed this blog. Next time I will complete the description of the Military Merit Medal (Militärverdienstmedaille), 1917-1920