On this occasion, I thought I would continue our discussion of the Military Merit Cross by describing the first issue of the cross in detail. This is another example of the kinds of discussions we can have and will provide a chance to share information on this beautiful and historically significant award.

The Military Merit Cross was established on October 24, 1849 and continued to be issued in this, its original form, until January 23, 1860. Before I describe this award let me provide some background information on its creation and some interesting facts about the award.

There were between March 1848 and November 1849 a series of uprisings and revolts within the Austro-Hungarian Empire. These events resulted in the Habsburgs fleeing Vienna and the Abdication of Emperor Ferdinand I in favor of his nephew Franz Joseph, who then became Emperor Franz Joseph I. The Habsburgs owed the survival of their empire to two men. Alfred I Prince Windisch-Grätz (Figure 1) and General Joseph Wenzel Graf Radetzky von Radetz (Figure 2)

Figure I, Alfred I Prince Windisch-Grätz. Image from author’s archive. 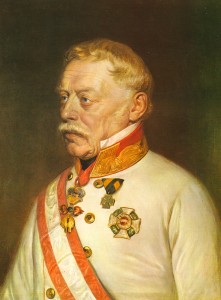 Once the revolt had been put down Radetzky proposed that a decoration be created as an award for the officers who remained loyal to the Habsburgs and who had served with him at Custozza and Novara in 1848 and 1849.  This initial proposal was modified to recommend that an award be created to reward officers who had performed heroically in suppressing the revolution of 1848/49 or who had been personally commended by Feldmarschall Radetzky during the revolution. When the cross was established on October 22, 1849, the official award criteria was further modified so that the Merit Cross was to be awarded to recognize officers of the Austrian armed forces who have accomplished especially meritorious services during time of war by high intelligence, courage and resoluteness, or in time of piece, by outstanding zeal. All officers who had participated in the campaigns of 1848/49 were awarded this decoration.  Thus 2,382 awards of this cross were issued between 1849 and 1859.  2,334 were issued for combat and services which was recognized with the addition of the war decoration in the form of a wreath that was added retroactively to the decoration after 1860.  45 crosses were issued for non-combatant service and thus did not qualify in 1860 for the addition of the war decoration. Three crosses were issued to foreigners. What follows is a summary of the crosses conferred by year. Please note that the decoration was not awarded for any service after 1849 until after the death of Radetzky in 1857. After his death the decoration began to be issued in 1859 for service subsequent to 1849, which is why the number issued in that year is so large:

1859 = 862 crosses issued, 841 with war decoration after 1860. (14 of these crosses were issued posthumously, one retroactively and 3 to foreigners. This is the point in time when crosses could be issued for services rendered after 1849. Thus the large number of crosses issued in this year.

All crosses issued prior to 1874 (thus all of the crosses issued from 1849-1860) were to be returned to the War Ministry and later to the Privy Treasurer upon the death of the recipient. After 1874 the recipient’s family was allowed to keep the decoration. This practice is a major reason why these crosses are rare. Recipients of the cross, all of whom were officers were allowed to add “recipient of the MVK” to their names. Some Notable recipients were: Feldmarschall Radetzky, Feldmarschall Archduke Albrecht, General of Cavalry Johann Freiherr von Appel, General of Cavalry Ludwig Prinz zu Windischgratz, Ludwig Ritter von Benedek.

One last point before I commence describing the cross in detail and that is that the cross design was considered to be so attractive that it was the inspiration for the design of several later awards.

Now I will describe the Military Merit Cross in an orderly fashion as I propose to do for other awards in the future.

Name of the Decoration:

The decoration which was, at this time, issued in one class and type was issued to recognize officers of the Austrian armed forces who have accomplished especially meritorious services during time of war by high intelligence, courage and resoluteness, or in time of piece, by outstanding zeal.

These badges are generally not hallmarked as the Austro-Hungarian regulations requiring hallmarks were not implemented until 1872.

The overall design of the decoration was in the form of clawed cross suspended from a flat ornamental eye through which passes a 15 mm oval grooved ring which is 1.5 mm wide.

A clawed cross the arms of which are slightly curved and taper towards the center medallion.  The upper arm has a flat suspension eye which has a suspension ring passing through it.  The suspension ring is grooved in the center.  The arms of the cross have a 2 mm-Garnet red enameled border. Inside of the border is a fine silver line and inside the line is a depression, which has a granulated finish. The 13 mm center medallion also has a Garnet red enameled border inside of which is a fine silver line and a granulated silver center medallion.  On the center medallion in two lines is the inscription VER DIENST (For Merit). Below the inscription is a broken French rule ornament composed of two lines with a dot in the middle (Figure 3) 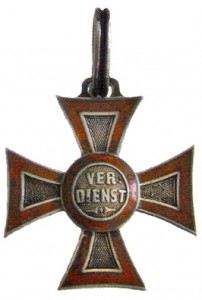 The reverse is plain silver for the official issued crosses and white enamel for privately made examples that were produced after 1855 (Figures 4&5). 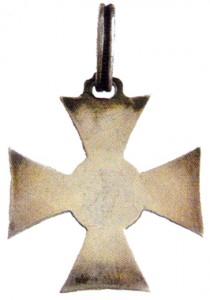 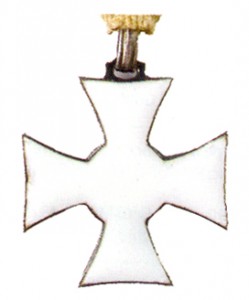 Note: The weight of the crosses may vary slightly based on the manufacturer.

Note: The size of the crosses will vary slightly based on the manufacturers

The crosses are composed of silver and enamel.

The crosses come in three variations which are:

Type I:  A cross as described above.

Type II:  Similar to the Type I cross except the reverse is in white enamel. These crosses were privately produced and not Government Issue. They were made after 1855 (Figure 5)

Type III:  Similar to the Type I cross except the reverse of the cross has an inscription. These are presentation pieces.  The inscriptions are privately added (Figure 6). 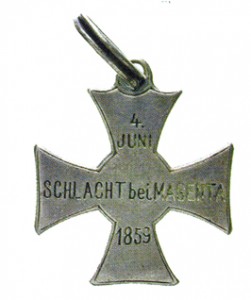 The designer of the crosses is unknown to the author.

The known manufacturers of the Merit Cross are: Christian Friedrich Rothe, Rothe and Neffe and Alexander E. Kochert

Case: Since decorations were produced by more than one medalist there are probably more than one style case. One case used for these decorations is illustrated below in Figures 7 and 8. This case was used for crosses believed to have been produced by Rothe. The exterior is in black leather or leatherette with trim on the edges and an inscription: Militär Verdienstkreuz, in Gold. The inside of the lid is in yellow silk. The inner portion of the lower part of the case is black velvet and fitted. 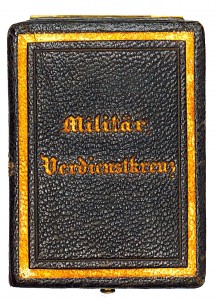 Figure 7: Case for decorations made by ROthe 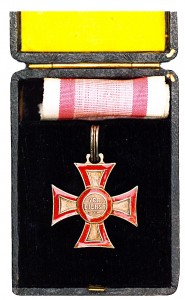 There were no attachments issued for this award.

Miniatures of this decoration exist. for an example please see Figure 10. 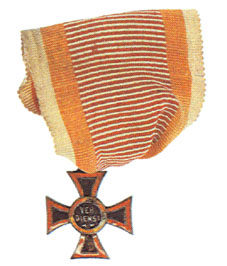 If anyone knows who designed the Military Merit Cross I would love to hear from you.