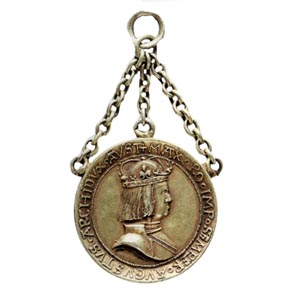 The Maximilian Golden Honor Medal, Type I (Mazimillian I Goldener Gnadenpfenning) was apparently issued as a reward for special merit in support of the emperor and his dynastic goals.

Interesting Facts: The word “grace” as used in the title of this medal had a different meaning when it was issued than it does today. Thus “grace” should be interpreted as “honor” thus this medal’s title is in today’s terms the Maximillian I Gold Honor Medal.

Design:  A Round medal with loop suspension eyes at the top.

Obverse: A bust of Maximilian I in armor facing to the viewers right and wearing a crown. Around the edge of the medal is inscribed MAX. RO. IMP. SEMPER. AVGVSTVS. ARCHIDV. AVST.   (Maximillian I Roman Emperor and Archduke of Austria). 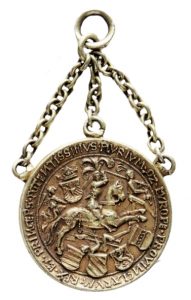 Reverse: In the center of the medal is a mounted knight, around which are shields and images of soldiers. Around the edge of the medal is inscribed: PURIVM. OZ. EVROPE. PROVINCIARVM. REX. ET. PRINCEPS. POTENTISSIVS

Ribbon: None, The medal is suspended from a three stranded gold chain which connects to the eyes at the top of the medal