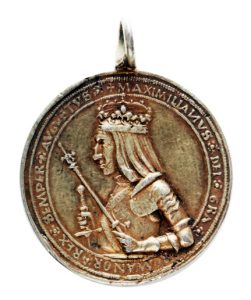 Introduction: The Maximilian Honor Medal, Type II (Mazimillian Gnadenpfenning) was apparently issued as a reward for special merit in support of the emperor and his dynastic goals.

Design:  A Round medal with a loop suspension eye at the top.

Obverse: A bust of Maximilian I in armor facing to the viewers left and holding a sword in his right hand and a scepter in his left. He is wearing a crown. Around the edge of the medal is inscribed MAXIMILIANVS. DEI. GRA. ROMANOR. REX. SEMPER. AVGUSTVS.   (Maximillian with God’s grace of Roman King and Emperor) 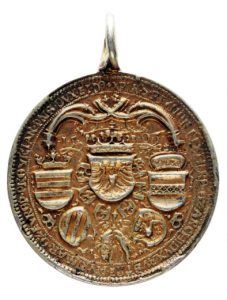 Reverse: In the center of the medal is the crowned Tyrol coat of arms within the collar of the Order of the Golden Fleece. Around this are shields with coat of arms of Hungary, Austria, Burgundy and the House of Habsburg. All of this is below a Gothic decorative element. Around the edge of the medal is the inscription: XPIA·REGNOR·REX·HERS QZ ARCHIDVX· AVSTRE· PLVRIMAR·QZ ·EVROP· PROVICIAR· PNS·DVX·ET·DO. Translation: The Hereditary King of Christian as well as other Realms, Archduke of Austria and of very many lands Prince, Duke and Lord.