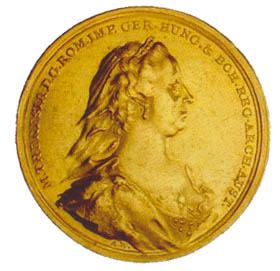 Reason Issued:  Issued by Maria Theresia to reward those who had rendered meritorious service to her and to the empire.

Classes or Types:  Two classes: gold and silver, with three subdivisions within each

Design:  A round medal with raised rim and with an attached suspension eyes at the top.

Obverse:  A bust of the Archduchess Maria Theresia, facing to the viewers right and wearing a gown clasped at the shoulder. The bust of the empress is also wearing a widow’s vail and a diadem and has long flowing curly hair. The medal has a raised rim. Paralleling the rim around the upper two thirds of the medal is the inscription:  THERESIA D.G. ROM. IMP. GER. HUNG. & BOH. REG. ARCH. AUST. Below the shoulder of the bust is the makers name: medals are known with three different makers marks. They are: A.W. (Anton Wideman) or I Wurth F (Franz Xaver Wurth) or I. Vinazer.F (Christian Vinazer). 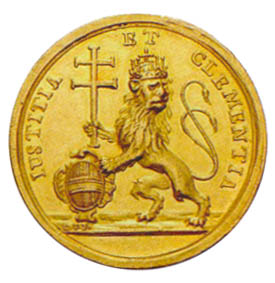 Reverse:  The Lion of Bohemia with St. Wenzel’s crown on his head standing on a stylized platform. The lion holds in its right paw the Hungarian Patriarchs cross. Its left paw rests on the Austrian Herald’s shield. Paralleling the top edge of the medal is an inscription: IUSTITIA ET CLEMENTIA (Justice and Clemency)

I hope you enjoyed this blog post. Next time I will discuss the Franz Joseph Bravery medal as issued from 1866-1915.