Joseph Steiner was born on November 24, 1895 at Langenreichen, Schwaben to master-cooper, farmer, and Mayor of Langenreichen Josef and his wife Josefa.  He was one of ten (10) children.  He later completed his studies to become a teacher at the Teacher Education Institution at Lauingen/Donau, and then on October 1, 1913 enlisted as a “One Year Volunteer” in the Royal Bavarian 3rd Infantry Regiment “Prinz Karl von Bayern” in Augsburg.  With songs and fanfare, and with soldiers with flowers stuck in their helmets, tunics, and rifles, on August 2, 1914 the 3rd Infantry Regiment mobilized and departed from the Augsburg Central Railway Station.  Gefreiter Josef Steiner was off to war.  Steiner’s brothers Martin and Johann were also mobilized.  In October of 1914 Steiner was promoted to Unteroffizier.  Steiner fought at the Battle at Lothringren, before Nancy-Epinal, at the Battle on the Somme, and at St. Quentin among others.  For his outstanding bravery at Foucaucourt, Steiner was awarded the Prussian Iron Cross 2nd Class.  On March 18, 1915 Josef Steiner was promoted to Leutnant der Reserve after completing an Officer Aspirant Course.  Steiner later joined the 11. bayerische Infanterie-Division under General von Kneußl. 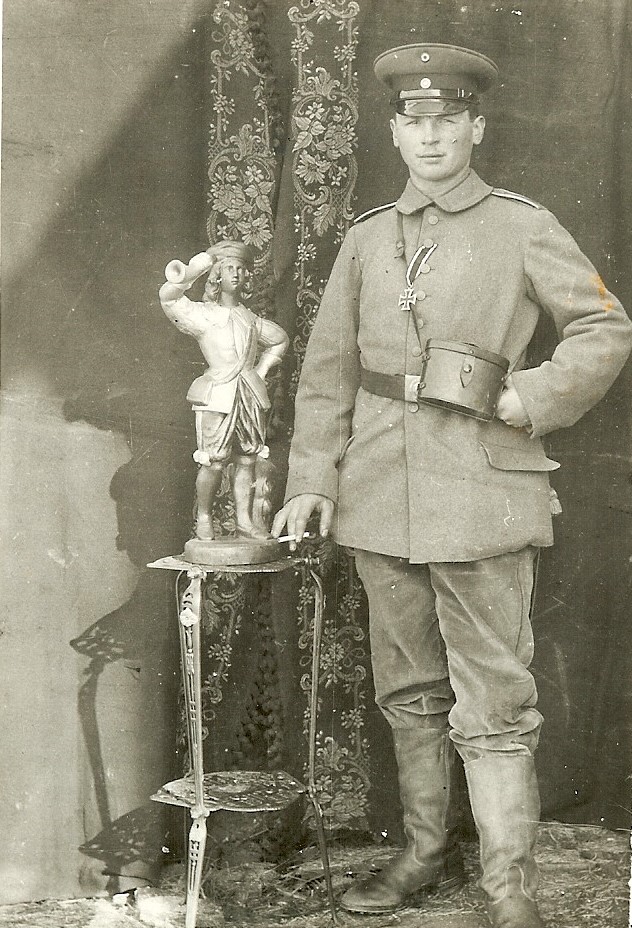 In 1915 Steiner fought against Russian troops in the east and fought at the Battle of Cholm, and at the Attack on Brest-Litowsk.  During this action, Steiner received a rifle-bullet wound to his left upper-arm and his left shoulder. 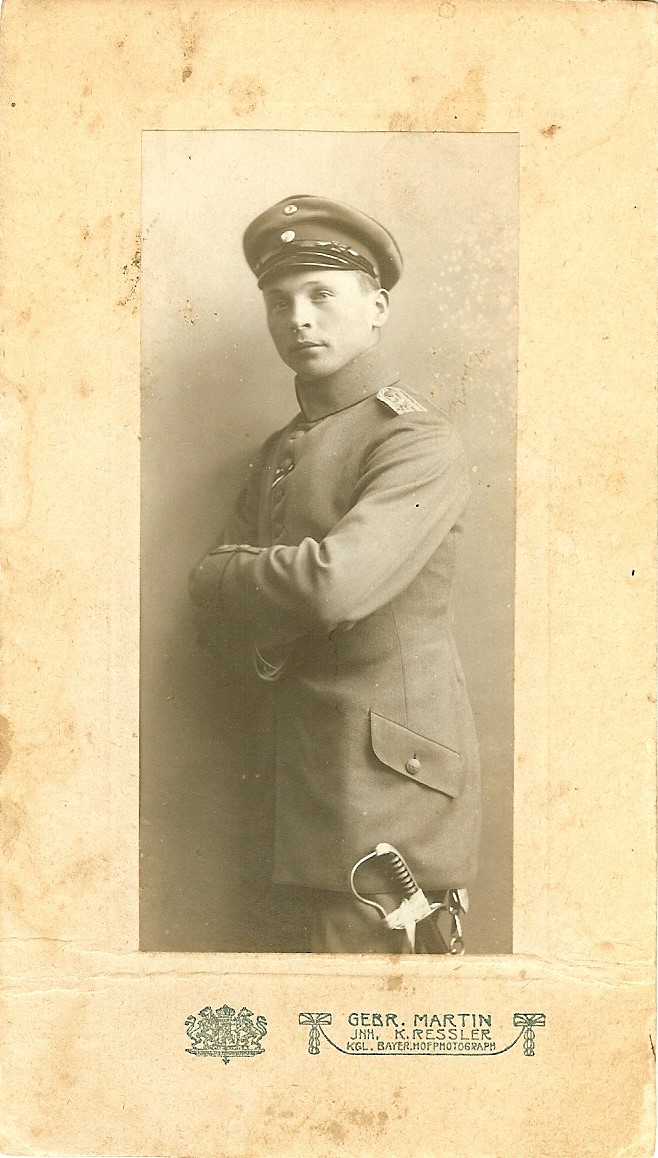 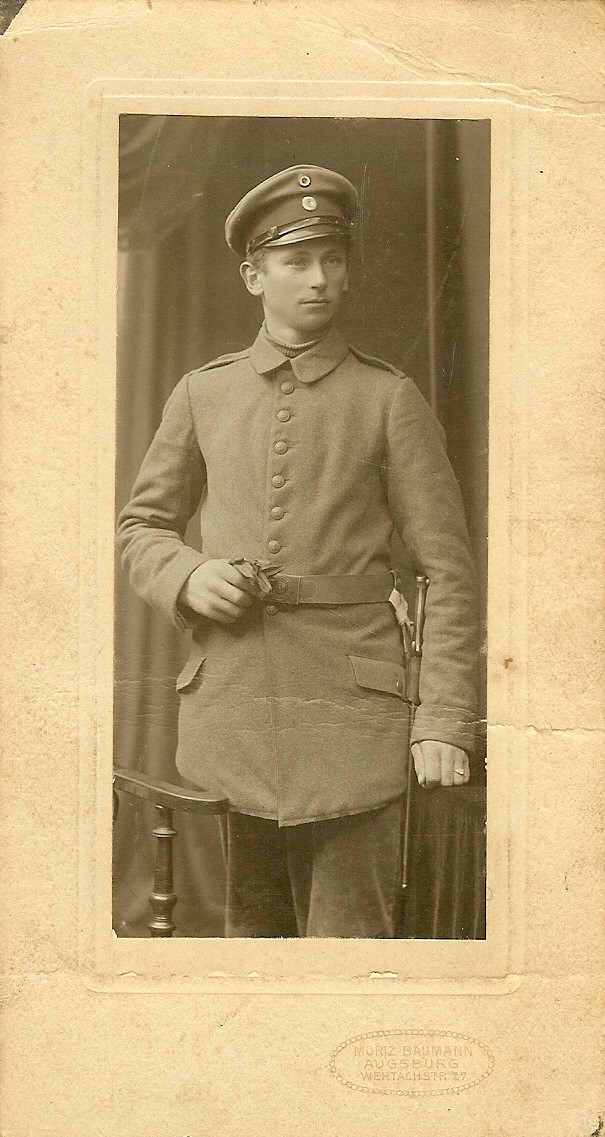 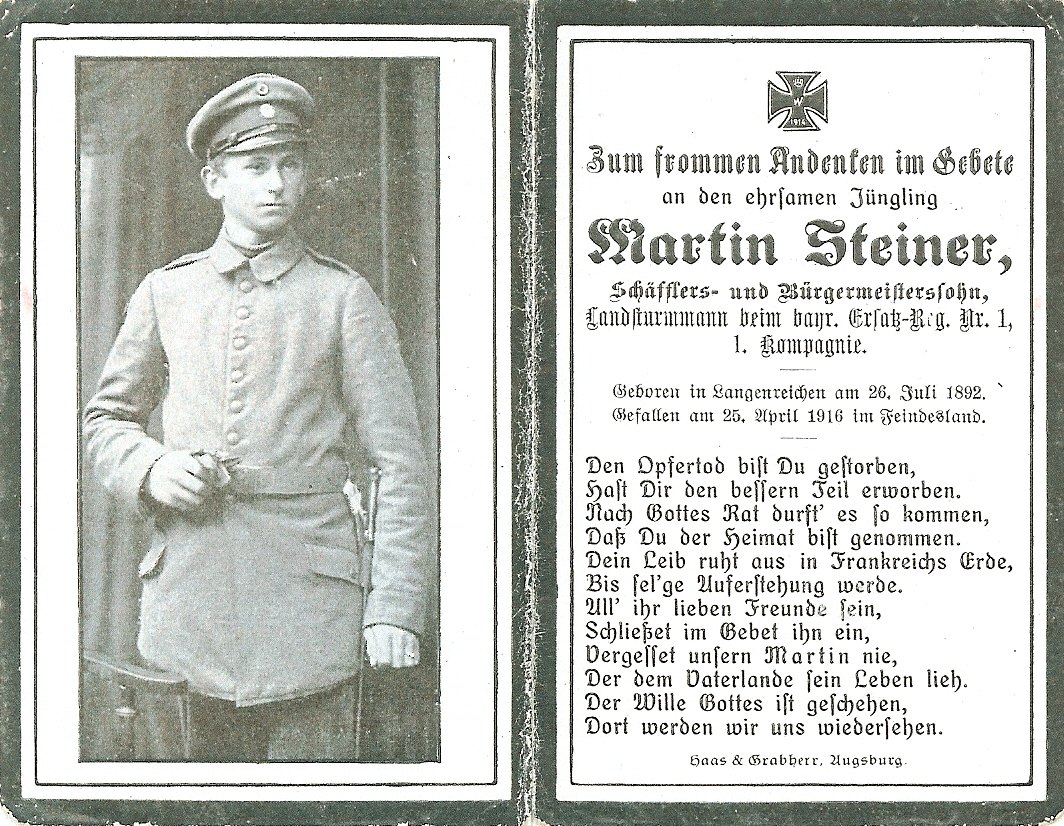 In 1916 Steiner fought at Verdun and at the Battle in the Forest before Avocourt.  His unit then moved back to the east, and on June 25, 1916, Leutnant der Reserve Steiner led his troops, as the Commander of the 8th Company, in an attack against a Russian position as part of the Brussilow-Offensive by Kolonie Emilin south of Linewka.

“The trench was 250 meters away, and under heavy fire Leutnant der Reserve Steiner organized his soldiers, and led them with a “Hurra”.  He was the first to reach the edge of the Russian trench.  With twenty-five (25) men of his Company in a hard and close battle, the enemy retreated.  Counter-attack after counter-attack by the Russians against this captured trench occurred, but the trench stayed in the hands of the 11th Bavarian Infantry Division”.

For this action, Leutnant der Reserve Steiner was later posthumously recommended for the Bavarian Military Max Joseph Order Knight’s Cross.  His day of appointment for the Knight’s Cross was not until February 4, 1920.  A Knight’s Cross with the Matrikel Nummer (matriculation number) “296” engraved in the ribbon ring was designated as Ritter von Steiner’s Cross.  An entry was made in the “Adelsmatrikel” (Nobility Registry) and he posthumously became “Ritter von” Steiner. 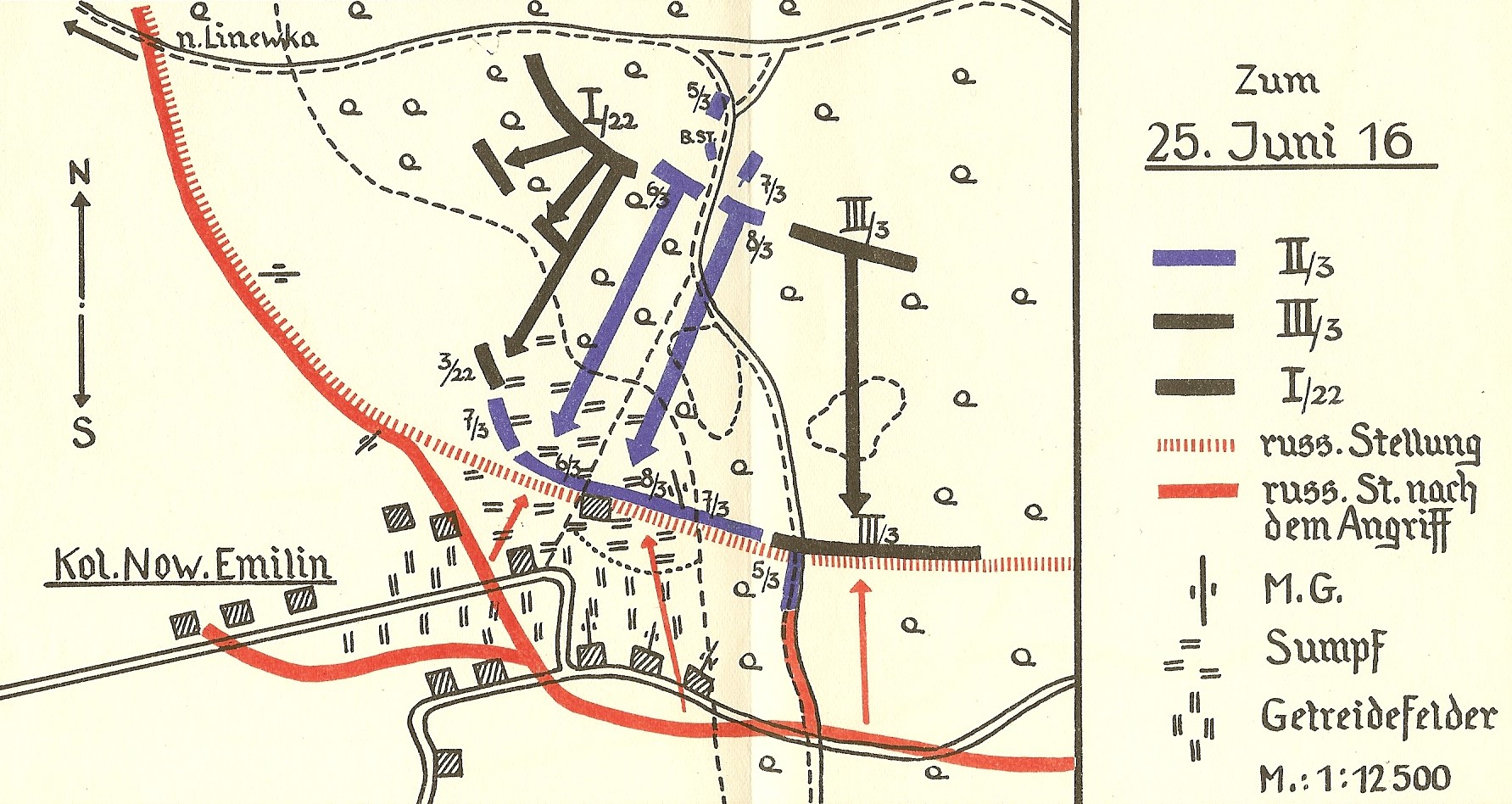 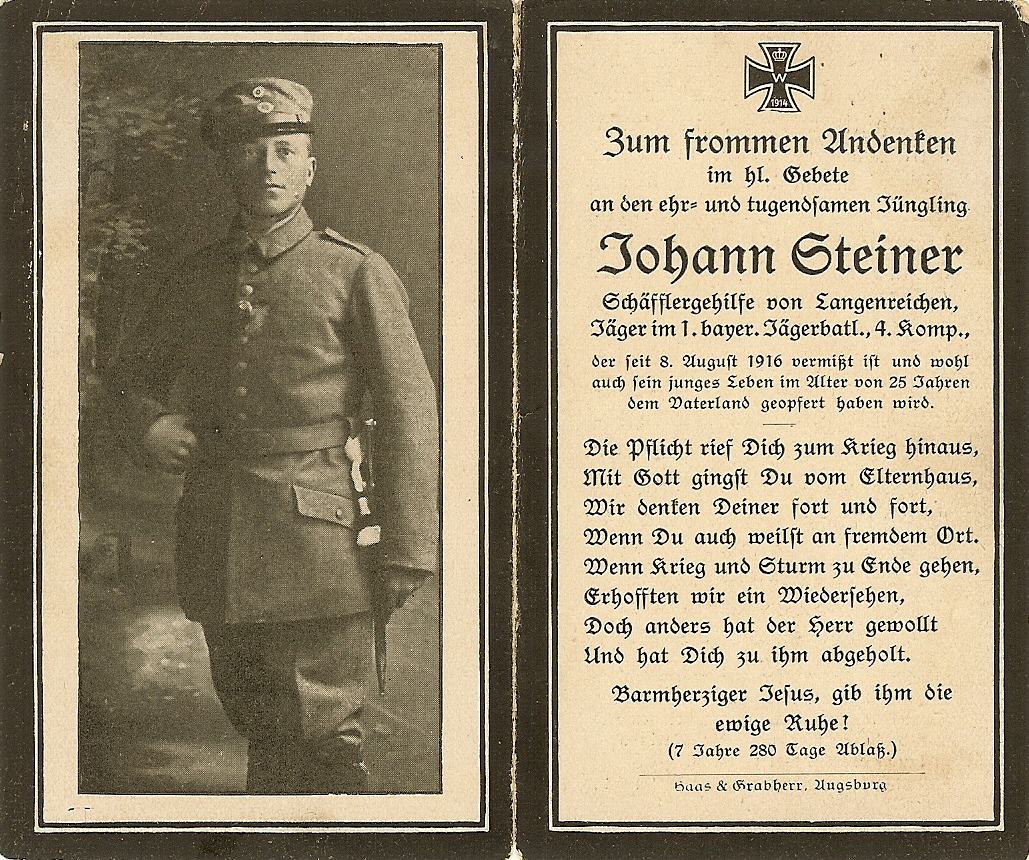 Leutnant Joseph Steiner died a hero’s death in action at the Battle of Kemmel while acting as the Commander of the 8th Company of the 3rd Infantry Regiment on April 15, 1918.

“On April 15, 1918 artillery behind the 11th Bavarian Division hammered the enemy positions at Zwartemolenhoek for two hours.  Then two battalions of the 3rd Infantry Regiment and one of the Bavarian Reserve Regiment 13 attacked when the artillery barrage ceased.  All attacked the English machine-gun positions with Leutnant des Reserve Steiner and his 8th Company at the lead.  The atmospheric pressure of a bursting shell threw him to the ground.  However, he quickly jumped up again and rushed the next machine-gun nest and neutralized it.  In the shortest time, the first position was taken.  When Steiner noticed that the main attack of the positions on the height was faltering, he went forward without waiting for his machine-guns, and with some quickly-assembled men, attacked the west slope of the height.  After a violent fire-fight involving heavy losses, he forced the enemy to withdraw.  Then the three Storm Battalions successfully rolled-up the position and won territory further to the North.  Steiner could not experience the victory over the enemy.  An infantry-shot had stretched-out the brave man on the ground”. 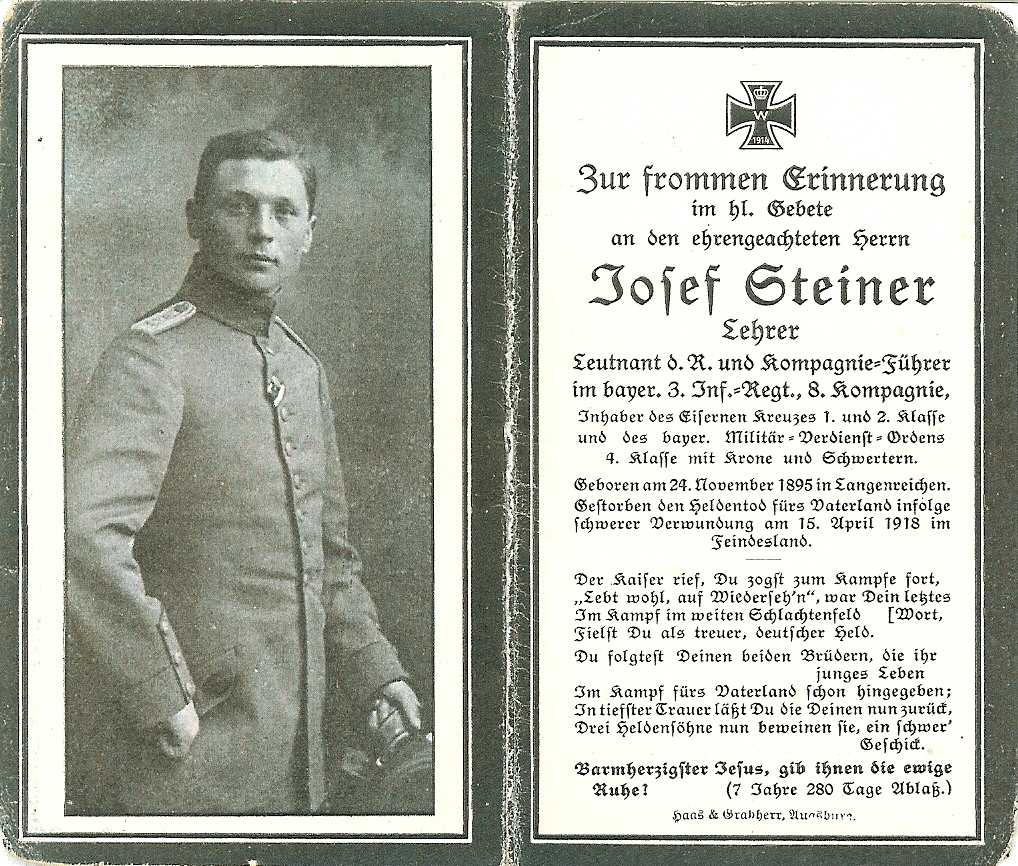 For his action at Kemmel, Leutnant der Reserve Steiner was later recommended for the Bavarian Military Max Joseph Order Commander’s Cross.  His day of appointment for the Commander’s Cross was not until February 4, 1920 however (the same date as his Knight’s Cross appointment).  A Commander’s Cross with the Matrikel Nummer (matriculation number) “58” engraved in the ribbon ring was designated as Ritter von Steiner’s Cross. An entry was made in the “Adelsmatrikel” (Nobility Registry) and he posthumously became “Ritter von” Steiner.  His Coat of Arms can be seen below.  Leutnant der Reserve Steiner was the only Leutnant since the founding of the Military Max Joseph Order in 1806 to be awarded the Knight’s Cross and the Commander’s Cross of the Order. 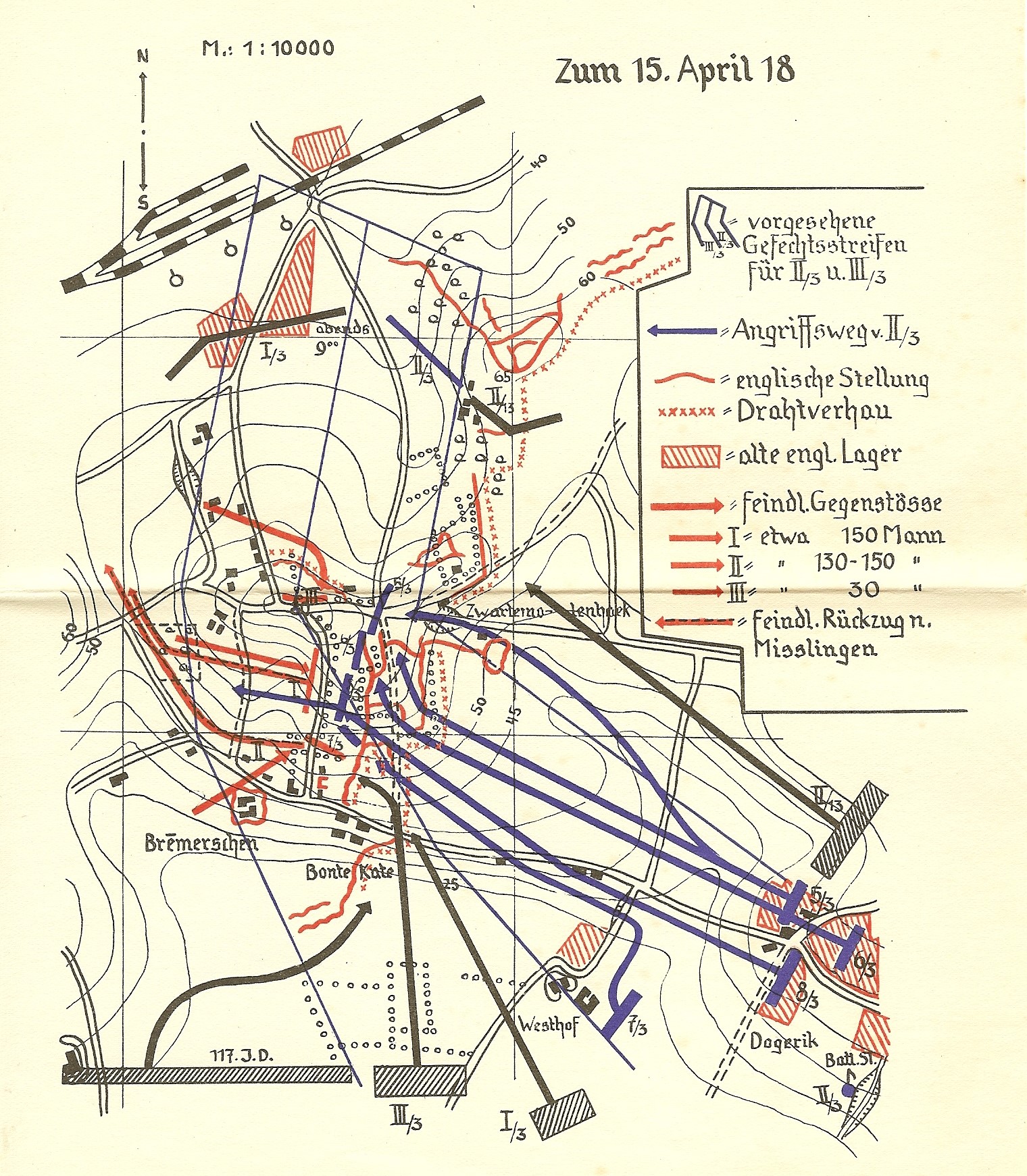 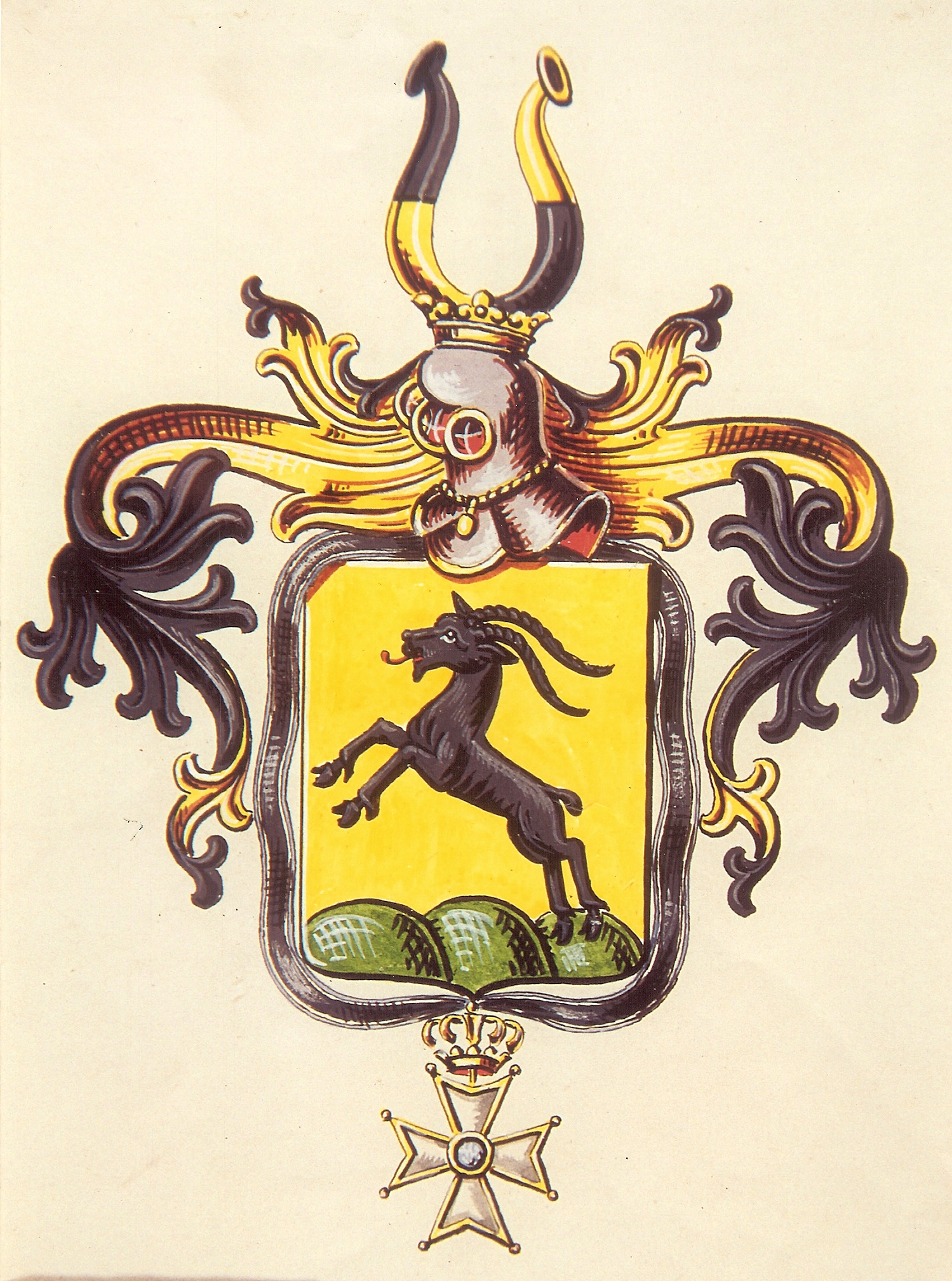 This painting of Ritter von Steiner was made by artist Ludwig Kochhanau (1882-1963) of München.  It shows Ritter von Steiner wearing his Military Max Joseph Commander’s Cross and his Knight’s Cross.  Of course, he never got to wear these awards as his appointments to the Orders were posthumous. 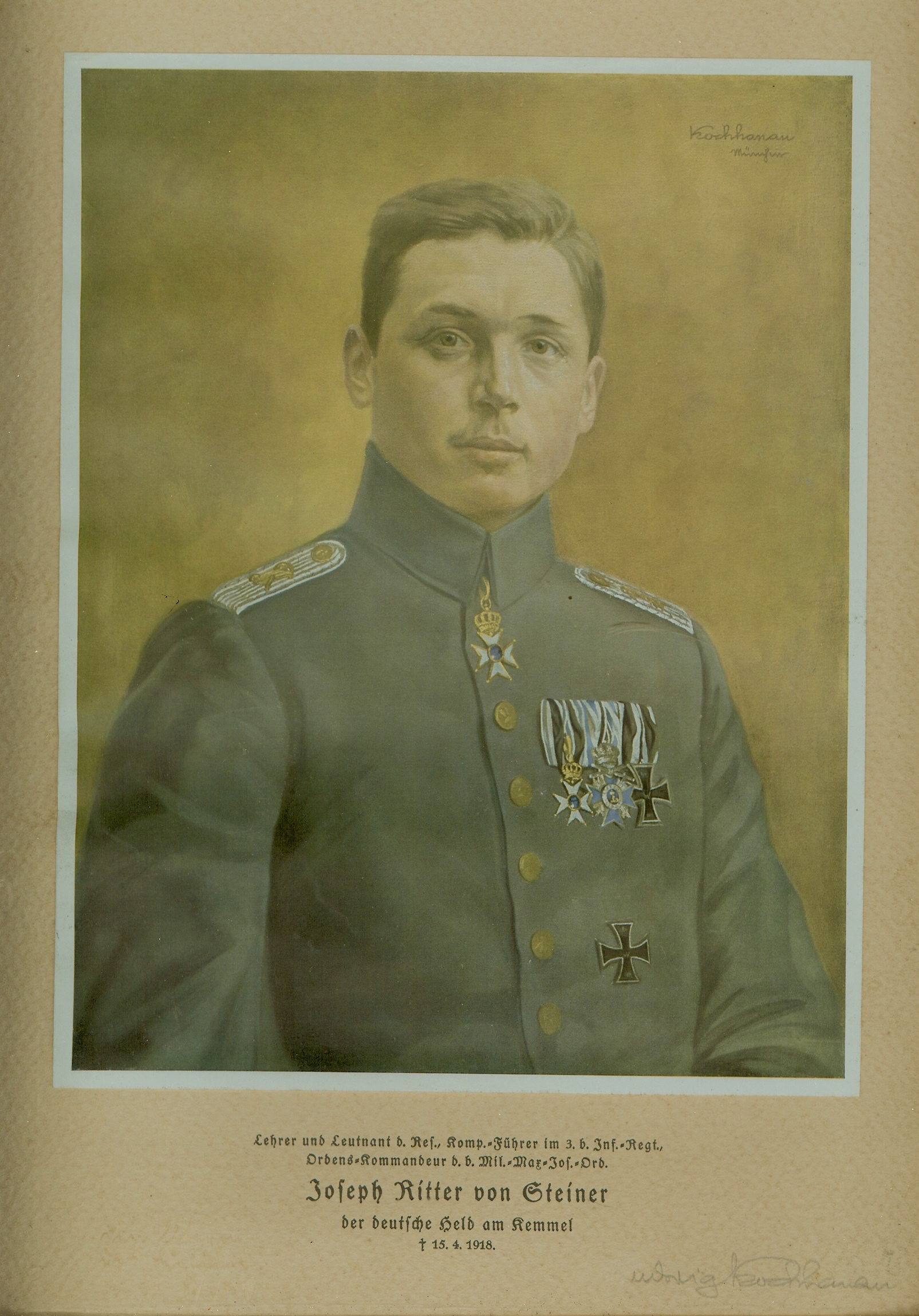 Image 10: Print of painting of Ritter von Steiner by Ludwig Kochhanau (signed by artist in pencil).  Image from author’s archive.

Leutnant der Reserve Steiner was buried in Grave No. 161 in Ploegstreet Bizet Cemetary No. 1 north of Armentieres (Belgium).  A field cross made of Belgian Mirabelle Plum wood was crafted for the grave by his men.  The remains of Ritter von Steiner were later returned to Germany in 1931.  On March 28, 1931 a funeral service and a procession were held.  In attendance at the funeral service were Wilhelm Ritter von Kollmann, and General-Major Freiherr von Stengel, among others.  Ritter von Steiner was then re-interred at the Westfriedhof in Augsburg.1 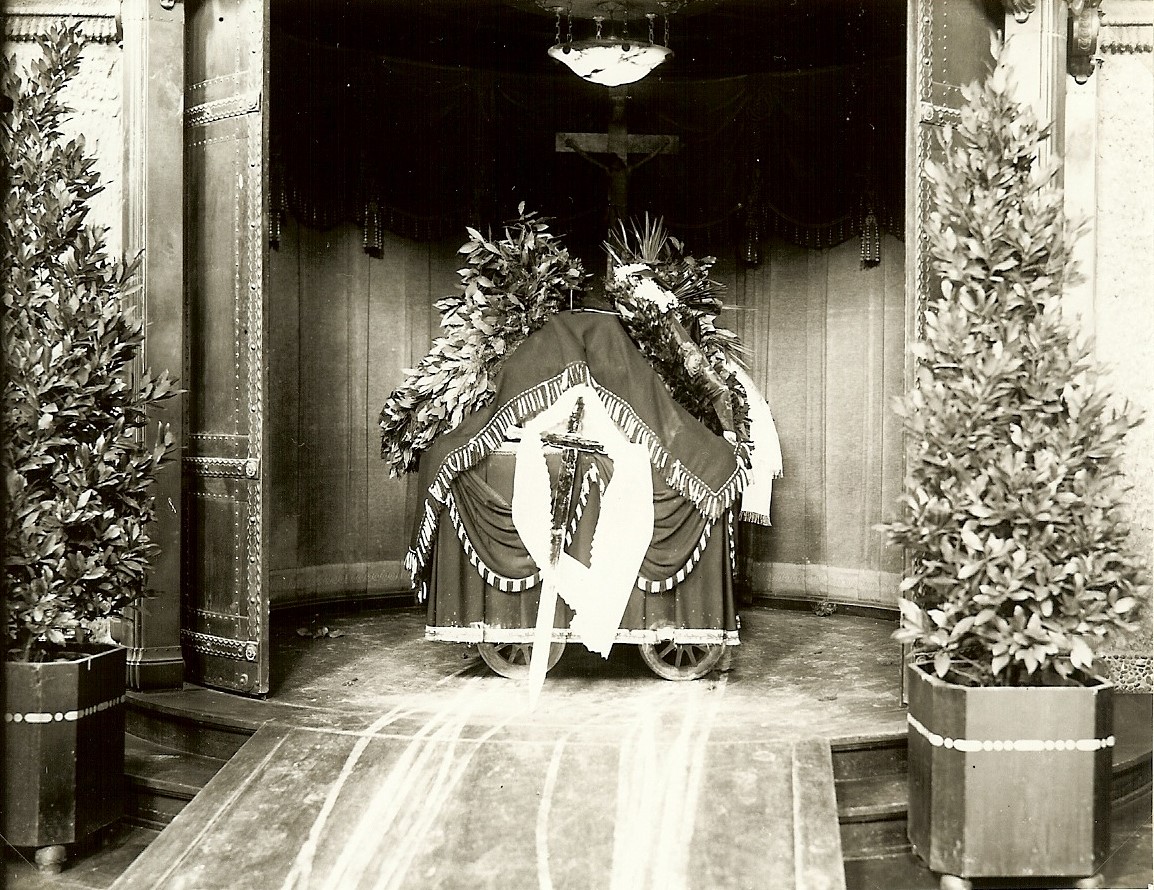 Image 11: The remains of Ritter von Steiner and the cross from his grave in Belgium in 1931.  Image from author’s archive.

In 1936 a new school was built in Augsburg and named the “Ritter-von-Steiner-Schule”.  On April 15, 1938, the Military Max Joseph Knight’s Cross (Number “58”) designated for Ritter von Steiner was forwarded to the “Ritter-von-Steiner-Schule”3 from the Bavarian Military Max Joseph Order Grand-Chancellory (Bayerischer Militär-Max-Joseph-Orden Großkanzleramt) and is believed to have been displayed there in a glass case.  It is also believed that the school was later damaged at the end of World War 2 due to aerial bombing.  This school was later re-named the “Volksschule am Bärenkeller” in 1947.  Today, the school is known as the “Grund-und Mittelschule Augsburg-Bärenkeller”.4  The Commander’s Cross (Number “58”) was last seen by the descendants of Ritter von Steiner in the late 1940’s.  The Knight’s Cross (Number “296”) designated for Ritter von Steiner is believed to possibly have remained in the Grand-Chancellory of the Order and may have later been awarded to another recipient after 1920.  It is very interesting to see the recent offering of Hermann Historica, Internationale Auktionen, München3 in the context of this history. 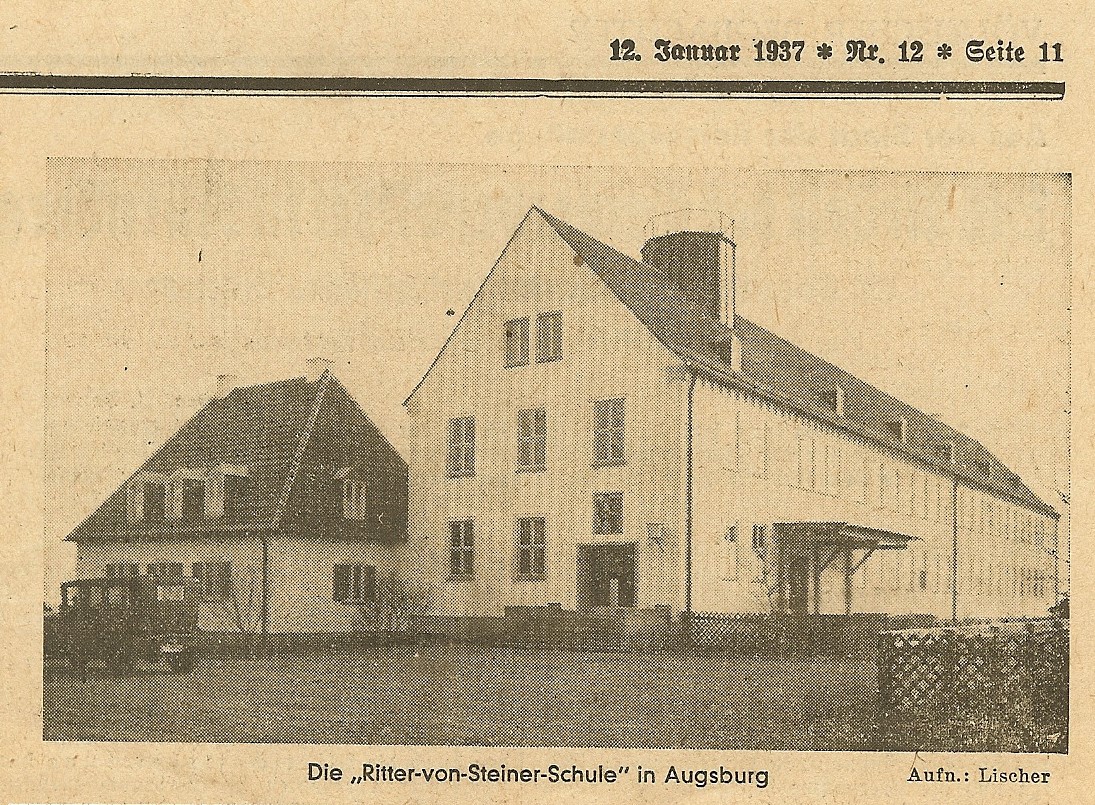 There is a street in Augsburg named “Ritter von Steiner Straße”.  Sadly, many people today may not know the significance of the name associated with the street.