When Maria Theresia was ruling the Austrian Empire with her husband Franz Stephan von Lothringian as Empress Consort, Archduchess of Austria and Queen of Hungary medals were typically issued with her image and that of her husband on the obverse. In this case however a medal was issued in 1766 with the image of her son as Joseph II to recognize his election as the Holy Roman Emperor. The medal was intended as a reward for those members of the Austrian armed forces who had served with special distinction under the command of Joseph II.

Reason Issued:  Issued by Joseph II on the occasion of his election as the Holy Roman Emperor as a reward for the outstanding merit by Austrian military commanders and other soldiers of the Austrian armed forces, which Maria Theresia had placed under his command, in war.

Design:  A round medal with an attached flat round stylized suspension eye at the top. 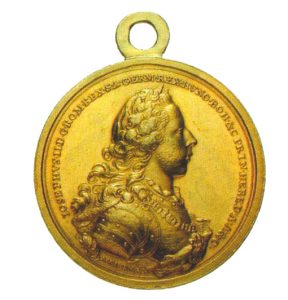 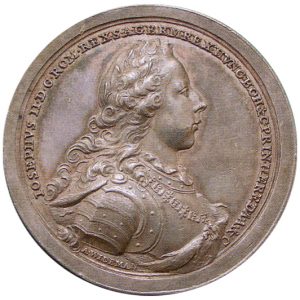 Obverse (Figure 1, above):  A youthful bust of Joseph II, facing to the viewers right. He is portrayed with long flowing hair in which is a laurel wreath near the temples. He is dressed in an armor breastplate with and an ermine mantel and wears the collar of the Order of the Golden Fleece. Paralleling the rim around the upper two-thirds of the medal is the inscription: IOSEPHVS II . D.G. ROM. REX. S.A.GERM.REX HVNG.BOH. &C. PRIN. HERED. A. A. &C.  Near the lower edge of the medal is the signature of the medalist: A. Wideman (Anton Wideman). 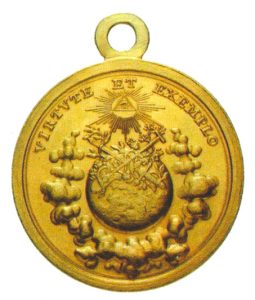 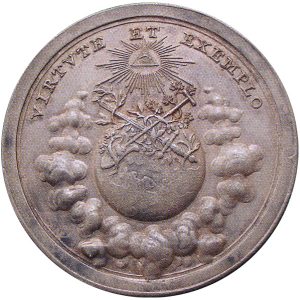 Reverse: The eye of God (a triangle with eye surrounded by a wreath of rays) overlooking a globe surrounded by clouds. Superimposed on the globe are a sword and a rudder which are crossed. Both are interwoven with boughs of oak and laurel. Along the top margin of the medal, above the eye of God is the inscription: VIRTVTE ET EXEMPLO (by virtue and example

Variations:  E. Holzmair reports that there were 14 variations of this medal issued from 1764 to 1790

I hope you enjoyed this blog post. Next time I will continue my discussion of jeweled awards.