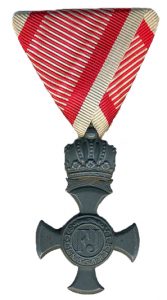 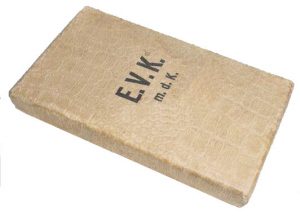 Case: The award came in several type cases. The regular issue case was two-piece and of white cardboard. It measured 100 mm by 60 mm. Privately manufactured boxes in red, brown and yellow are known to exist. These cases came with a smooth finish and with a simulated crocodile skin finish. On the cover of these cases appeared the letters E.V.K. or E.V.K./m.d.k in two lines in black. On the exterior of the bottom of these cases is often found the name of the manufacturer. Crosses were also issued in boxes of better construction. These boxes resembled the boxes for the Gold and Silver Merit Crosses but were made of red cardboard or simulated leather. Some boxes had no inscription on the outer lid while others had the following inscriptions E.V.K. or in two lines: E.V.K./m.d.k. embossed in gold. The inside of the lid is white. The inside of the case is also white. The bottom of the case is off-white. The inner liner of the lid of the cases was in white silk and often marked with the makers logo in gold. The inner portion of the bottom of the case was fawn colored simulated velvet and was fitted. 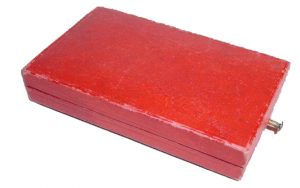 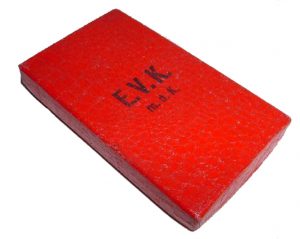 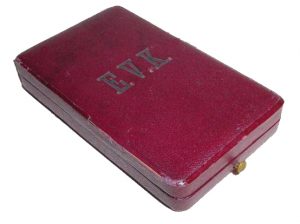 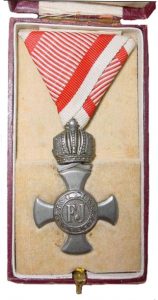 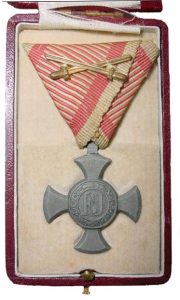 Figure 8: Ribbon issued for civil merit by military personnel. issued in a small rectangular form on October 27, 1917. Image from the author’s archive.

Figure 9: War ribbon issued for combatant service, issued in a small rectangular form on October 27, 1917. Image from the author’s archive.

Ribbon: The ribbon came in two variations. They are:

Figure 10: A small rectangular ribbon for this decoration sometimes issued with small attachments to indicate specific awards was introduced in October 27, 1917. Image form the author’s archive.

Hope you enjoyed this blog. Until next time when I will complete my description of the Iron Merit Cross I hope you find joy in our shared interest