How NOT to Display a Veteran’s Medals 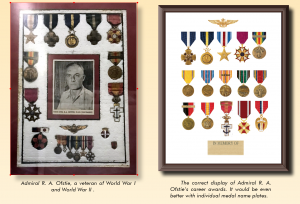 A few months ago I was visiting the USS Yorktown and while walking below decks saw a medal display that  is an example of someone who went to a lot of work to do a poor job of displaying a naval hero’s medals. The display in question is of Vice Admiral R. A. Ofstie, a veteran of World War I and World War II whose final assignment was commanding the American Sixth Fleet. Admiral Ofstie was a distinguished naval commander in World War II who was awarded the Navy Cross and Silver Star for valor as well as the Navy Distinguished Service Medal and the Legion of Merit.

This haphazard public display of the Admiral’s medals shown above is a perfect example of why anyone displaying a veteran’s awards needs to know the order precedence of the medals and an understanding of the campaign medals that accompany military service during different conflicts. In this case someone went to a great deal of trouble to take a box of some of the admiral’s medals and carefully cut out a form for each medal in a piece of styrofoam (unfortunately a very bad material to preserve the medals). The medals are displayed in such a haphazard manner that they certainly confuses Navy veterans, family members or historians who view the display.

The admiral was awarded the Navy Cross, our country second highest award for valor, but for some reason two of the medals are displayed and inserted haphazardly in the line of other medals. In actuality the admiral was awarded the Navy Cross only once as well as a Distinguished Service Medal, the Silver Star and the Legion of Merit as his prominent decorations. Two World War I Victory Medals are displayed as well as the Spanish Order of Military Merit and the Polish Cross of Military Merit but no campaign medals of World War II.

His naval aviator wings are displayed at the bottom of the case over a group of miniature medals which are mounted in reverse order showing the foreign decorations first. The display leaves out his World War II campaign medals in addition to the World War II Victory Medal and National Defense Service Medal. Based on his World War II service he would’ve also received the Philippine Liberation Medal.

A correctly assembled display above shows his full military honors. This is the attention to detail we owe every American veteran.