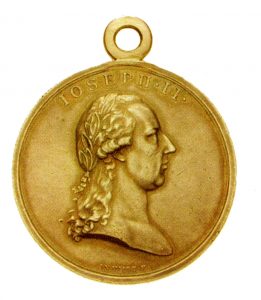 Reason Issued:  As a reward for acts of bravery or gallantry in time of war by non-commissioned officers and soldiers who were not otherwise eligible for the Order of Maria Theresia

Design:  A round medal with an attached round flat suspension eye at the top. 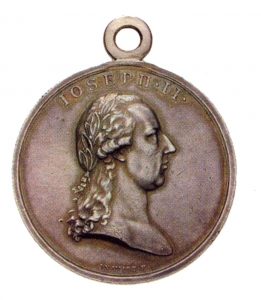 Obverse (Figure 1&2):  Inside a raised rim is a youthful bust of Joseph II, facing to the right. He is portrayed with long flowing hair in which is a laurel wreath near the temples.  Paralleling the rim around the upper half of the medal is the inscription: IOSEPH II. Near the lower edge of the medal is the signature of the medalist: I. N. WIRT F. (Johann Nepomuk Wirt (note the F is for the German word fabrikat (fabricated) and is not a part of the signature). 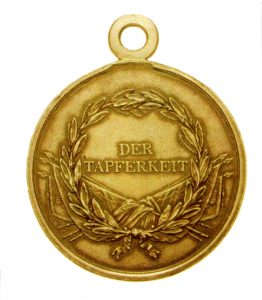 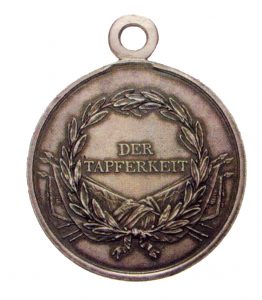 Reverse (Figure 3&4): The reverse of the medal has four crossed flags and two crossed standards at the bottom.  The two front flags can be seen through the leaves of the laurel wreath and appear to have the Austrian Coat of Arms (the barred shield), with an archdukes hat above it, the latter is also recognizable on the standard over which is superimposed a laurel wreath which is tied at the bottom with a bow. Within the wreath and above the flags are the words DER TAPFERKEIT (for bravery).

Number Issued:  For bravery in the war with Turkey in 1791, 74 gold medals and 611 silver medals were awarded

I hope you have enjoyed this discussion.
Rick