At a current membership of over 1500 members, OMSA is the largest society in America devoted to the collection, preservation, research, and dissemination of information on world-wide orders, decorations, and medals. As with many societies and organizations, OMSA’s origins are humble and started as just an idea in the mind of one individual.

In April of 1949, S. G. “Yash” Yasinitsky, our founder, issued a mimeographed sheet that he called “The Medal Collectors’ Cooperative”.  This two-page type written memo appealed for other collectors to join with him and each other in sharing information about our hobby (click on image to the right to enlarge):

This is an introduction to our initial attempt to bring together medal collectors all over the world.  The purpose of our cooperative is that medal collectors may ask questions and others answer them.  We are sorry that we shall not be able to untangle all the problems by ourselves, so we’ll greatly appreciated all answers to questions that are sent to us by collectors, We shall also try to help fellow collectors to get items that they need by giving them the opportunity to swap with others…

We are going to keep the cooperative a one happy family and we shall maintain friendly relations with all collectors. Information that is of aid to other collectors will be published without cost . . .

We tried to figure out a way to make this a free coopertive, but it seems that we must impose a small fee of 25 cents for 12 issues in order to cover mailing costs . . .

We are happy to let you know that our first attempt to bring together medal collectors from all over the world met with a very favorable reaction. We received many letters, some of which praised the COOPERATIVE and some criticized it. However, we feel like they say, that criticism is proof one has done something worth attracting attention. We do appreciate constructive criticism and we shall do our best to publish a sheet that will satisfy all medal collectors.

In March 1950, the “Medal Collectors’ Cooperative” announced formation of the Orders and Medals Society of America.  Yash again wrote about the great enthusiasm he was receiving:

We are happy to report that collectors everywhere were stirred by our latest issue and the proposed organization under the title of ORDERS AND MEDALS SOCIETY OF AMERICA is rapidly taking shape. The suggestion to form this organization (COOP., December, 1949) was enthusiastically accepted and now the organizing is enjoying a successful progress. . .

In November 1950, the “Medal Collector” was issued in its first 6″ by 8-3/4″ format.  This was more or less adhered to through December 1953. On May 4, 1951, another milestone was achieved when OMSA was incorporated under the laws of the State of California as a not-for-profit corporation.

In January 1954, a new publication format was presented, called “The Medal Collector Bulletin”.  This new journal was printed by offset and the size was increased to 7″ x 9-1/2″.  In April 1955, the word “Bulletin” was dropped from the title.  April 1956 saw the adoption of the older small-size format, which was retained until December 1997. The title of the publication was changed to “JOMSA” starting with the May 1990 issue.  Today the “JOMSA” is published in the 8-1/2” by 11” format. 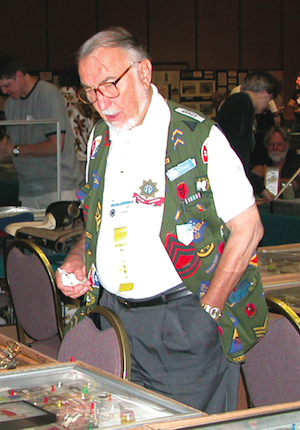 Another major milestone was achieved when OMSA held its first OMSA Convention in Gloversville, New York in the summer of 1960.  Since that time, OMSA has held conventions in 28 different cities and recently celebrated its 50th Anniversary OMSA Convention in Grand Rapids, MI. The OMSA Conventions have also attracted attendance from many countries around the world.

Sadly, “Yash” Yasinitsky, OMSA’s founder and member #0001, passed away peacefully on Wednesday, May 27, 2009. For those who were lucky to know him, he was an energetic, funny and interesting individual. Born April 1927 in Harbin, China to Russian émigrés. Yash’s given name was Sviatoslav Gregoriyevich Yasinitsky. The family moved to the United States in 1941. He served in the United States Army as a military policeman in wartime Europe and during the early United States occupation of Germany. Yash went on to serve in law enforcement and public safety.

Yash Yasinitsky in his familiar regalia at an OMSA Convention

Fortunately, OMSA has had many volunteers step up to the plate since Yash first published “The Medal Collectors’ Cooperative” to continue building on his initial dream. Their dedicated work has helped OMSA grow to its present state of success, including the addition of an OMSA Website and the pursuit of research to live up to its original purpose as an organization. Those who have unselfishly given and served as OMSA Officers are honored here: