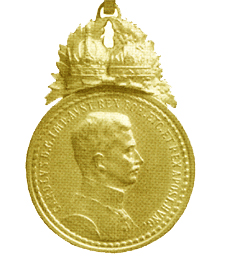 The Great Military Merit Medal (Gross Militärverdienstmedaille), 1917-1920 is not at first glance a very important looking decoration. However it was the highest award for merit for officers other than the imperial orders. Thus the award which was only awarded 16 times was a decoration of substantial significance. What follows is a discussion of this significant award.

Reason Issued:  To recognize the highest achievement in time of war or to reward outstanding service in piece.  This service was greater than that recognized by the Silver Military Merit Medal but not warranting the award of a high order.  It was intended for high-ranking officers (Regimental Commanders and above) and other notable persons in the society.

Classes or Types:  This decoration was issued in one class and two types.

Design: A round medal with a raised rim and an attached crowns and wreath at the top 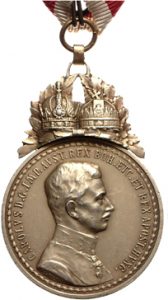 Obverse: Inside a fine line of laurel leaves is a bust of King Karl in high relief facing to the viewers right in a Field Marshals uniform and wearing the Order of the Golden Fleece.  Below his shoulder is the name of the maker, KAUTSCH (Heinrich Kautsch).  Around the bust is inscribed: CAROLVS. D. G. IMP. AVST . REX. BOH . ETC. ET. REX. APOST. HVNG.  The attached crowns represent the Austrian imperial crown on the viewers left and the Hungarian royal crown on the right. The crowns are placed upon a wreath composed of laurel on the viewers left and oak on the right which is tied at the bottom with a ribbon.  The crown is struck as a part of the medal. 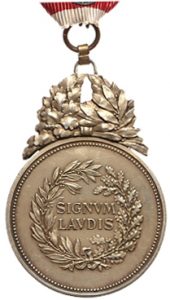 Reverse: Inside a beaded line which follows the contour of the medal and within a wreath of laurel on the left and oak on the right, which is tied at the bottom with a bow, is inscribed, SIGNVM LAVDIS (A token of esteem).  The reverse of the wreath is fully detailed.

Size:  The decoration without crown is 37-38 mm in diameter.  The crown is 30 mm in width and 18 mm high including the suspension eye. Thus the overall height of the medal is 55-56 mm.

Variations:  There are six variations of this decoration 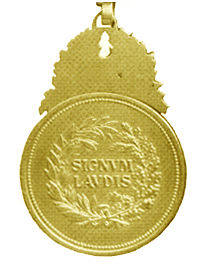 Figure 10: War Ribbon with swords. Image from the author’s archive.

Note: Occasionally the bars are engraved although this was unofficial. 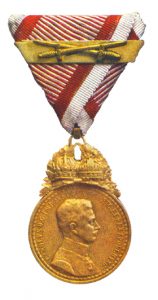 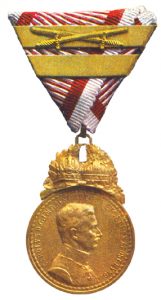 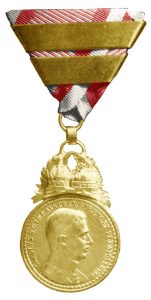 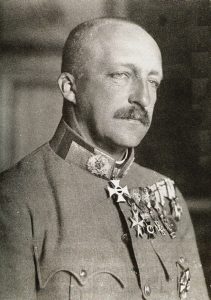 Hope you enjoyed this blog. Next time I will describe the Olmutz Military Medal