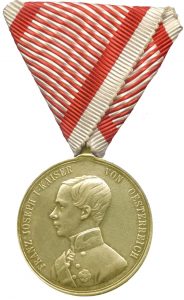 In this blog I am going to discuss the Bravery Medal (Tapferkeitsmedaille) that was issued in 1849 with the image of Franz Joseph on the obverse. The Bravery Medal as a decoration had existed since it was first established by Joseph II in 1789. The first decorations issued specifically for bravery were called Honor Decorations (Ehrenzeichen) until 1809 when the next decoration in the series was re-named as the Bravery Medal (Tapferkeitsmedaille). In addition to the medal issued in 1789 versions of this medal designated as Honor Medals were issued in 1792 by Franz II and 1804 by Franz I. Versions designated as Bravery Medals were issued prior to 1849 in 1809 by Franz I and in 1839 by Ferdinand I. In 1849 when Franz Joseph came to the throne he modified the bravery medal to assure that it was consistent with the other awards that bore his image during this phase of his reign. He would further modify the bravery medal in 1859 and again in 1866 and for a final time in 1915. In this blog I am going to discuss the Bravery medal as first issued during Franz Joseph’s reign. In previous blogs I have discussed the bravery medals that preceded those established by Franz Joseph and in subsequent blogs I will discuss all of the versions of the bravery medal that were issued from after 1849.

Reason Issued:  The gold medal and the silver first class medal were to reward bravery by non-commissioned officers and enlisted men in the face of an armed enemy. While the silver medal second class was given not only for the reasons cited above but also for exceptional courage and commitment in peacetime.

Classes or Types:  This decoration was issued in three classes 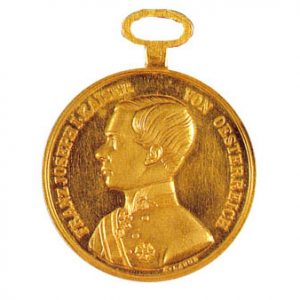 Design: A round medal with a flat oval coined suspension ring at the top

Obverse (Figure 2 above): A bust of the youthful Emperor Franz Joseph I facing to the viewers left. He is wearing a field marshal uniform decorated with the Order of the Golden Fleece and the grand cordon and star of the Military Maria Theresia Order. Above the bust is inscribed:  FRANZ JOSEPH I. KAISER VON. OESTERREICH. Below the bust is the name of the designer, K. LANG. 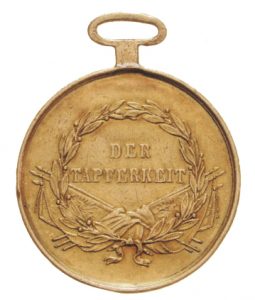 Reverse:  Within a laurel wreath, tied at the bottom with a bow and superimposed over two crossed flags and a standard is a two line inscription DER / TAPFERKEIT (For Bravery). On the flags is the Austro-Hungarian coat of arms.

Figure 4: The War Ribbon on which all bravery medals were awarded. Image from the author’s archive.

Attachments: A rectangular gold clasp bearing the obverse of the gold bravery medal with the image of the emperor facing to the left. These clasps were unofficial and were worn based on the personal preference of the recipient. The clasp was not to be worn without the medal.

Miniature: Miniatures of this decoration exist. They are often 15 mm in diameter and weigh 1.9 grams. 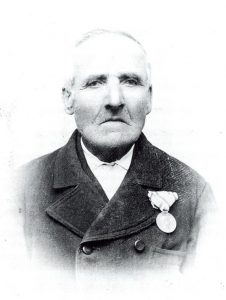 Hope you have enjoyed this blog and the exposition on the 1849-1859 Bravery Medal. In my next blog I will be following up on a previous blog and providing more information on the jeweled awards of the Austrian and Austro-Hungarian Empire.