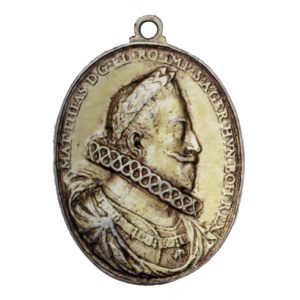 Introduction:
If the reason for issuing later medals which were similar to this medal can be taken as a guide then the Emperor Matthias I Honor Medal (Kaiser Matthais I Gnadenpfenning) was issued as a reward for special merit in support of the emperor and his dynastic goals.

Interesting Facts: The word “grace” as used in the title of this medal had a different meaning when it was issued than it does today. Thus “grace” should be interpreted as “honor” thus this medal’s title is in today’s terms the Maximillian I Honor Medal.

Design: An oval medal with a loop suspension eye at the top. 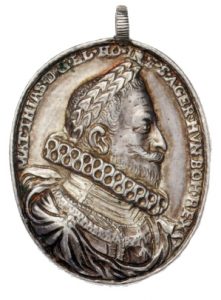 Obverse: A bust of Matthias I in armor wearing the collar of the Order of the Golden Fleece and with a laurel wreath in his hair facing to the viewers right. Around the upper edge of the medal is inscribed MATTHIAS. DG. EL. HO.IMP. S. A.GER.HVN. BOH.REX (Matthias with the grace of God German, Hungarian, Bohemian King) 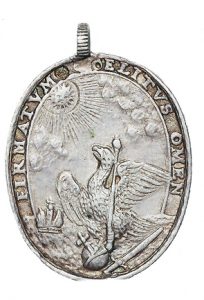 Reverse: Inside a raised rim is an inscription that reads: FIRMATVM COELITVS OMEN (A token of the glory that was established). Within the inscription is a scene of the sun’s rays beaming down on an eagle with the crown, scepter and sword of state by its side.

Hope you enjoyed this blog. Until nest time, I hope you find joy in our shared interest.