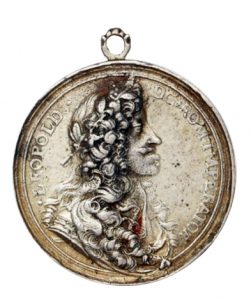 Interesting Facts: The word Gnaden (Grace) as used in the name of this medal had a different meaning when it was issued than it does today. Thus “grace” should be interpreted as “honor” therefore the title in today’s terminology would be the Emperor Leopold I Silver Honor Medal

Design: A round medal with an attached round suspension eye

Obverse: A bust of Emperor Leopold I facing to the right with long flowing hair with a victor’s wreath on his head and wearing armor. Around the upper portion of the medal is the inscription: LEOPOLD D.G. ROM. IMPERATOR (Leopold with the Grace of God Roman Emperor) 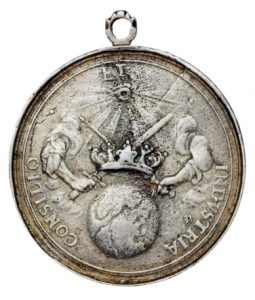 Reverse: Inside a raised rim is an all-seeing eye beaming down on a crown scepter and sword held in two arms over a globe. Around the scene is inscribed in widely separated words: CONSILIO ET INDVSTRIE (Council and Industry)