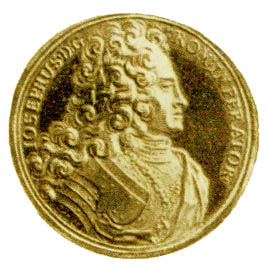 Introduction: This medal: Emperor Joseph I Golden Honor Medal (Kaiser Joseph I Goldene Gnadenmedaille), was issued as a reward for special merit in support of the emperor and his dynastic goals

Reason Issued: If the reason for issuing later medals which were like this medal can be taken as a guide, then this medal was issued as a reward for special merit in support of the emperor and his dynastic goals

Interesting Facts: The word Gnaden (Grace) as used in the name of this medal had a different meaning when it was issued than it does today. Thus “grace” should be interpreted as “honor” therefore the title in today’s terminology would be the Emperor Joseph I Golden Honor Medal

Design: A round medal with a raised rim

Obverse: Inside a raised rim is the bust of Emperor Joseph I facing to the right with long curling hair, wearing armor. Around the upper half of the medal near the rim is inscribed: JOSEPHVS D.G. ROM. IMPERATOR (Joseph with the grace of God Roman Emperor). See obverse of medal above. 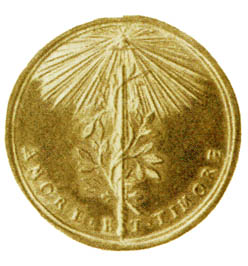 Reverse: Inside a raised rim, at the 12 o’clock position on the medal is “god’s eye” with rays extending out from it. A sword extends upward from the 6 o’clock position into the lower rays of the eye.  A laurel bough passes behind the sword and then curves around its blade. Following the lower portion of the curve of the medal is inscribed: AMORE.ET. TIMORE (Love and Fear) with the word ET having one letter on either side of the pommel of the sword.