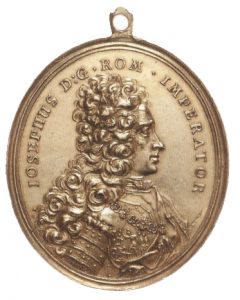 Introduction: If the reason for issuing later medals which were similar to this medal can be taken as a guide, then this medal: the Emperor Joseph I Golden Honor Medal (Kaiser Joseph I Goldene Gnadenmedaille, was issued as a reward for special merit in support of the emperor and his dynastic goals

Reason Issued: If the reason for issuing later medals which were like this medal can be taken as a guide, then this medal was issued as a reward for special merit in support of the emperor and his dynastic goals

Interesting Facts: The word Gnaden (Grace) as used in the name of this medal had a different meaning when it was issued than it does today. Thus “grace” should be interpreted as “honor” therefore the title in today’s terminology would be the Emperor Joseph I Golden Honor Medal

Obverse: Inside a raised rim is the bust of Emperor Joseph I with long curling hair, wearing armor and facing to the viewer’s right. Around the upper half of the medal near the rim is inscribed: JOSEPHUS D: G ROM. EMPERATOR (Joseph with the grace of God Roman Emperor) 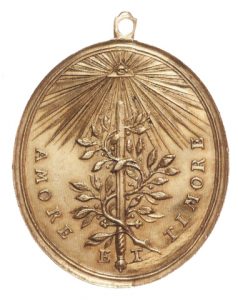 Reverse: Inside a raised rim, at the 12 o’clock position on the medal is “god’s eye” with rays extending out from it. A sword is extending upward from the 6 o’clock position into the rays of the eye.  A tree with its stem rapped around the pommel of the sword passes behind the sword with some branches passing in front of the blade. Following the lower portion of the curve of the medal is inscribed: AMORE. ET. TIMORE (Love and Fear) with the word ET having one letter on either side of the pommel of the sword.