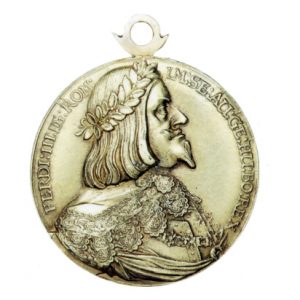 Reason Issued: If the reason for issuing later medals which were similar to this medal can be taken as a guide, then the Emperor Ferdinand III Honor Medal (Kaiser Ferdinand III Gnadenmedaille) was issued as a reward for special merit in support of the emperor and his dynastic goals

Interesting Facts: The word Gnaden (Grace) as used in the name of this medal had a different meaning when it was issued than it does today. Thus “grace” should be interpreted as “honor” therefore the title in today’s terminology would be the Emperor Ferdinand III Copper Honor Medal

Design: A round medal with an oval suspension eye at the top

Obverse: A bust of Emperor Ferdinand III facing to the viewers right with a laurel wreath in his hair and wearing a cope with a lace a collar. Inscribed around the top half of the bust is: FERDI III. D. G. ROM. IM.SE. AU. GE. HU. BO.REX. (Ferdinand III. With the grace of God Roman Emperor, Sovereign Emperor of Austria, Galicia, Hungary, Bohemia, King) 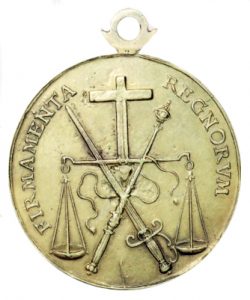 Reverse: The reveres features a scale of justice below and behind these scales are a sword and scepter crossed with the scepter passing from left right. Above the scale and touching its crossbar is a cross. Inscribed around the edge of the reveres of the medal is FIRMAMENTA REGNORVM (Heavenly Reign)

Type of Material: Gold and Silver 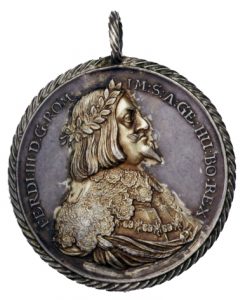 Type I obverse: As described above

Type II obverse: As described above except that it has a rope design on the rim of the medal and a raised line outside of the inscription.

Type I reverse: As described above

Type II reverse: As described above except that it has a rope design on the rim of the medal and a raised line outside of the inscription.